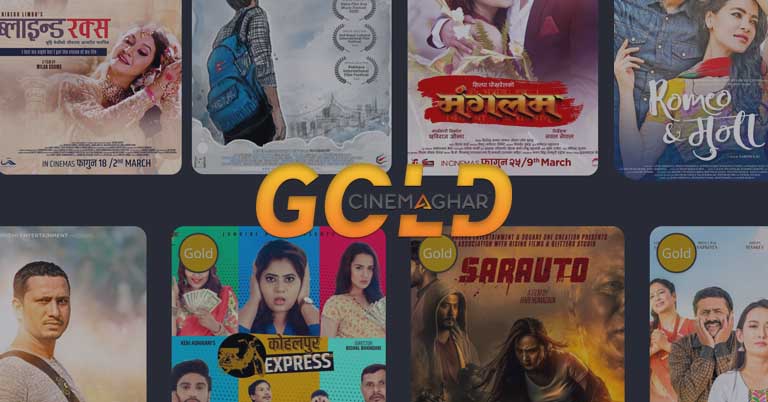 The ongoing pandemic has put the movie industry throughout the world upside-down. With productions halted and cinema halls shut down, the industry is in dire straits. In the case of Hollywood, the decision of Warner Bros. to release its entire 2021 slate of movies simultaneously on theaters and its own streaming platform—HBO Max, sent ripples of concerns and excitement globally. And in a bid to save Kollywood from this unforeseeable scenario that it’s found itself in, a local streaming platform announced its exulting return. Cinemaghar Gold, a video streaming platform has resurrected itself in an all-new look—hoping to make it big among Nepalese movie enthusiasts.

Like I mentioned earlier, Cinemaghar isn’t an entirely new product. Founded in 2016, this OTT (Over The Top) video streaming service had already gained traction among a handful of audience. During this time, the company even exclusively launched movies like “Bato Muniko Phool 2” on its platform shortly after its theatrical release. But now, 361º Media is taking the next step in revolutionizing the video streaming habit of the Nepalese audience. Cinemaghar Gold looks to quench the Nepali cinema-watching (and similar contents) thirst of people everywhere.

With its integration of local, international payment gateways, and other options for those without access to either, Cinemaghar Gold is already off to a great start. For the local Nepalese subscribers, there’s the option to pay from eSewa or Khalti (with other options on the way). Likewise, there are card payment alternatives from gateways like MasterCard, VISA, and American Express as well.

On the other hand, Mr. Khagendra Lamichhane (Chairman, Cinemaghar) also announced that the integration of various India-based payment options like PayTM, JioMoney, etc. is in its final stage.

But those without access to any of the digital payment means can lend “Cine Coins” from their friends or families too. Here, anyone that can purchase Cine Coins for a subscription can lend it out to others. With all this, Cinemaghar Gold takes the first step in achieving its universal market.

Besides the global availability, I’d say the company’s next big achievement is its pricing. At launch, one can subscribe to Cinemaghar Gold’s annual package for just NPR 500. The pricing is also uniform to users worldwide—meaning it doesn’t where you are, what matters is your willingness to watch. Similarly, a single subscription will be valid on a maximum of 2 devices at a time.

Unlike other mature international streaming services like Netflix, Amazon Prime, Disney+, etc. Cinemaghar Gold doesn’t have regional-content variation. What’s available to subscribers in Nepal is also available to those in India, US, or any other country. Moreover, because the platform is in its early stages, we’re expecting all the video qualities to be in Full-HD (1080p) resolution.

That is a reasonable guess considering how its mobile-first approach to content consumption almost perfectly adheres to FHD videos. Also, don’t expect premium technologies like HDR, Dolby Vision, surround sound, etc. to be available on the platform right away. At this point in time, most of those features are overkill for watching Nepali content anyway. For less than Rs. 1.50/day, I’d say the team at Cinemaghar Gold has done an excellent job at enhancing its appeal.

What are the available contents? With more content scheduled to be added every month, the company is also currently running “Cinemaghar Gold 365 Days Movie Mela”. This online movie festival is basically what I’ve discussed about the service so far.

Cinemaghar Gold will also be adding its original movies, short films, web series, and stand-up comedies on a regular basis, although no specific target/claim has been announced. To discourage the Nepalese audiences’ mentality of siding with YouTube for watching new Nepali movies, Mr. Lamichhane mentioned that Cinemaghar Gold will be bringing said movies first on its platform before they’re available on YouTube.

For this, the company has collaborated with different Nepali movie distribution houses like Highlights Nepal, OSR Digital, etc. To prevent dreadful issues for a streaming platform like payment security, piracy, etc. Cinemaghar Gold has features like 5 layers of security, screen-record prevention, and more.

Keeping all these details aside, let us now move on to how you can be a paying member of the platform. As expected, things are pretty simple. Instead of using an email address of registration, the team has decided to go with a mobile number citing an added layer of authentication and security. It is available on Android, iOS, and Android TVs for download. However, if you’re an Android user, you will have to download the APK installation file from the website for now.

For the other options, Cinemaghar Gold can be downloaded from their respective app distribution platforms. Plus, if your TV supports Chromecast, you can also stream movies from your account directly into the TV.

Wrapping it all up, the introduction of such a streaming service in the context of Nepal is most definitely a positive step. On top of easing the access of local entertainment content on a global scale, Cinemaghar Gold also marks the dawn of the next step for Kollywood. To fulfill its promise of added content, the company will discover many hidden talents in the industry—no doubt.

Furthermore, it will create job opportunities and boost the country’s economy as well. While I admit going streaming services will never be able to capture the magic of watching a movie in a theater, being able to enjoy it on the go, or at the comfort of your home is a different luxury altogether.