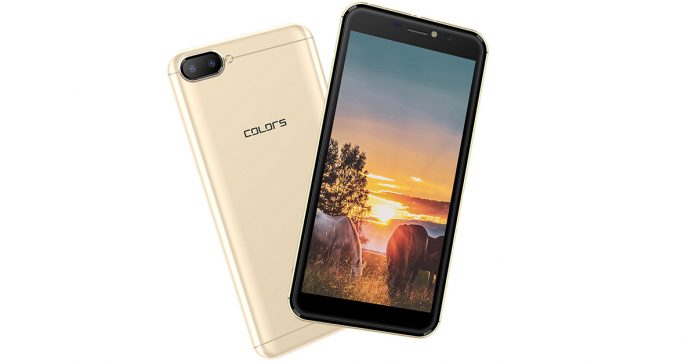 When it comes to the bar and feature phones, Colors has made a significant mark in the Nepali market. But this time, Colors has shifted their focus to lure the budget-conscious audience into the featured-packed smartphones rather than on the feature-deficient bar and feature phones. And the Colors Pride 1A is the latest addition in their popular Pride-series smartphones. The Pride 1A, despite being an entry-level smartphone, comes with a dual camera setup at the back.

As mentioned earlier, the features a pair of cameras on the back. And it surely is the major highlight of the device. The camera duo on this device is a combination of a 5MP primary shooter aided by a VGA depth sensor. On the front, a 2MP selfie shooter resides on the top. The front camera is accompanied by an LED flash, which can brighten up the faces while taking selfies in the low light scenario.

In terms of display, the phone houses a 4.95-inch TN panel with a 2.5D glass topping to make it seamless. The display also comes with Dragontrail glass on the top, which is entitled to protect the display from cracks and scratches during the falls. Following the latest trends, the display on the Pride 1A also comes in an 18:9 aspect ratio.

The phone is powered by a Quad-core processor and has been provided with 0.5GB of RAM and 8GB of onboard memory. On the software side, the phone has got Android Go version of the Android Oreo (v8.1). With Android Go version of software on the board, the device doesn’t need much RAM to perform the day to day tasks. So, even with a mere 0.5GB of RAM, it can handle minor tasks like using Facebook, Instagram, watching videos on YouTube, surfing the internet through Chrome, etc.

The phone comes with dual-SIM support and boots with a 2200mAh battery on the board.