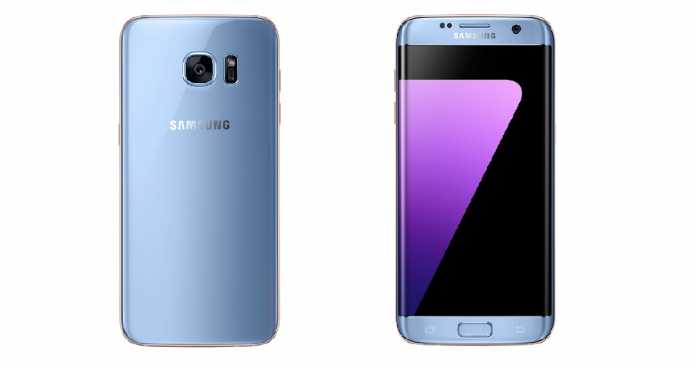 Samsung, the best-selling smartphone brand in Nepal has now brought a new color variant of its flagship built device. Joining the leagues with already available Black onyx, Gold Platinum and Silver Titanium variants of Samsung Galaxy S7 Edge, Coral Blue version has now emerged in the market. The newbie has also brought a luring offer. Now, on the purchase of Samsung Galaxy S7 Edge (costing Rs. 88,900), you will also get cash back of Rs. 12,000. The device also comes with Android Marshmallow version out of the box flavored by TouchWiz UI on the top. The device also bears the privilege for an upgrade to the Nougat version. Powering off the device is done by an Exynos 8890 chipset, which is an Octa-core processor. And the graphics portion is taken care by Mali-T880 MP12 GPU. Storage wise, the device houses a 4 GB LPDDR4 RAM and a ROM of 32 GB with a provision for an enhancement up to 200 GB.

On the optics side, the back and the front side of the device bears 12MP and 5MP shooters respectively. Both the cameras include an aperture of f/1.7. However, the senior one is privileged by the Optical Image Stabilization (OIS). This assembly has made Samsung Galaxy S7 Edge one of the best camera smartphones.  Fitting perfectly in the size of 150.9 x 72.6 x 7.7 mm, the device comes with 3600 mah non-removable battery. In order to shorten the company with the wall charger, the device also inherits a Quick charging technology (QC 2.0).

Though being a year old, the device costs a hefty price of Rs. 76,900. The device bears alluring specs and obviously worth the price. However, the approaching MWC 2017 will bring new and awesomely built devices and there are a number of devices going to be launched in Nepal very soon, which will obviously prove this device obsolete and might engulf you in the regrets. So, instead of jumping straight to buy Samsung Galaxy S7 Edge, I found it witful to wait. Anticipation will definitely pay off.