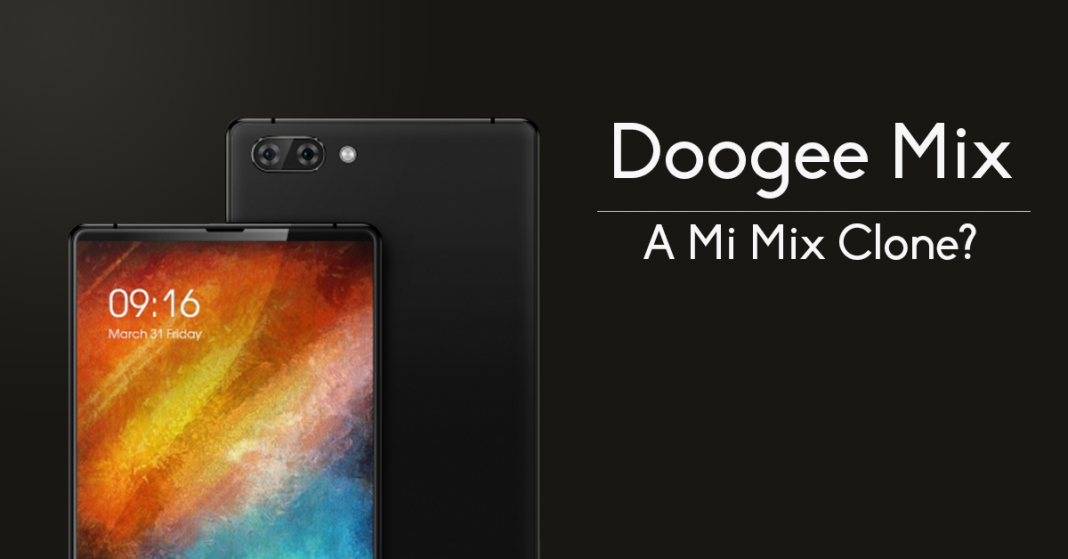 Xiaomi, the company well known for copying the design language of others, somehow managed to get an innovative tagline with the release of Xiaomi Mi Mix. The Mi Mix got a warm welcome in the smartphone industry for its bezelless design, at least on the three sides of the screen. But, the Doogee launched a new phone at the Global Sources fair in HongKong named “Doogee Mix” that doesn’t just sound like Mi Mix but also looks like Mi Mix. That said, these two phones have pronounceable differences as well and that’s what you’ll find in this post.

Doogee Mix: What We Know so Far

Doogee, the Chinese company that is popular in its homeland for producing quality budget phones, recently managed to get international attentions with its latest release. There are two reasons for that. The first being the tri-bezelless screen and the second being the pricing. The phone that looks like Mi Mix will cost you less than half of its price. The rumors claim the phone to be a sub$200 one. Plus, not just the design but the specifications of the phone look equally impressive on paper. As far as the naming is concerned, the company says it came up with the name “Mix” as the combined form of Minimum and Maximum. The phone with smaller form factor sports a maximum display. The display is said maximum not because of its size but for its design that has been stretched to three sides of the phone.

Coming to the differences between Mi Mix and the Doogee Mix, the first is the screen size. The Dooze Mix has a smaller screen size of 5.5inch, Full HD IPS LCD screen. This new cheap bezelless smartphone comes with Helio X25 processor, 4GB RAM and the 64GB storage. The rumors claim there will be a higher-end variant of the phone that will have Helio X30, 6GB RAM and 128GB storage.  Unlike the Mi Mix, the phone has a slim physical earpiece on the top and the front mounted fingerprint sensor. For the cameras, it has a dual lens (16MP + 8MP) on the back and the 8MP unit on the front chin. The phone runs on Android 7 Nougat and houses a 4050mAh battery.

Well, the phone looks and sounds interesting but the fact is the phones like this will never make to the market outside of its homeland, China. So, it’s better not to expect availability of the phone in Nepal. However, this phone launch is hinting towards the bezelless era of smartphones. We now can expect to see more phones with smaller bezels and larger displays not just in flagship ranges but in mid and budget ranges as well.