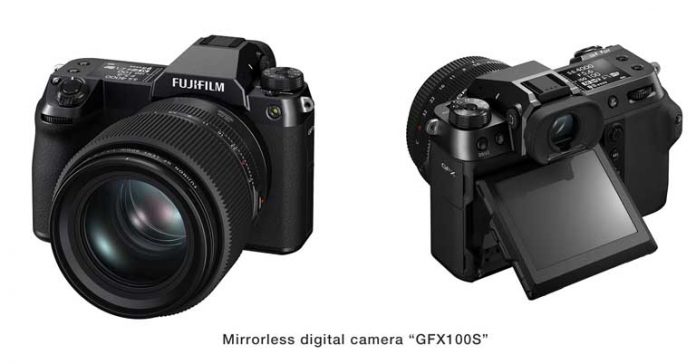 In the past 24 hours, Fujifilm has announced multiple new products including cameras and lens. It even confirmed future firmware updated for some of the existing cameras. Among the recently launched product is the new Fujifilm GFX100S – the company’s latest medium format camera. In this post, we will take a look at the specs, features, expected price, and availability of Fujifilm GFX100S in Nepal.

Fujifilm GFX100S is a mirrorless digital camera that sports a 102MP back-illuminated CMOS image sensor. The sensor is paired with a quad-core X-Processor 4. The camera makes use of the FUJINON GF lens. The camera has a magnesium alloy case and can operate at temperatures as low as -10-degree Celsius. Fujifilm has even managed to make the camera 500g lighter than the GFX100. The reduction in the size is because of the new shutter unit and IBIS mechanism. The new IBIS mechanism is nearly 20% smaller and 10% lighter compared to that on the GFX100. It comes with 6.0 stops of 5-axis in-body stabilization. In addition to the gyro and acceleration sensor, it also makes use of the new vibration-reducing stabilization of better stabilization.

GFX100S has 3.76 million phase-detection points that nearly cover 100% of the surface. Fujifilm has also updated the movement prediction algorithm and face/eye detection. As a result, the new camera can track moving objects and people more accurately. The company even claims that when used with appropriate lenses, the camera achieves a smooth focus of -5.5EV even in dark conditions.

The top mode dial has size positions that users can customize for different functions as per their convenience. Fujifilm has also made the Focus Lever flat and claims that it will help reduce physical discomforts. It has a 3.2-inch LCD monitor that can tilt in three different directions. In addition, there is a 1.8-inch sub LCD monitor on the top that displays key EXIF settings.

There is no information about its availability in Nepal. But if it were to launch here, we can expect the price of the Fujifilm GFX100S in Nepal to be around NPR 800,000.