‘MeroSpark’ is one of the most useful websites for students under HSEB Curriculum; it enables the students to grab both online and offline academic (reference) notes. The website is designed to provide reference notes of the different academic level. Besides that, the website regularly informs important events such as board examination, official notices which are published by associated educational departments. All the posts in MeroSpark are categorized in a systematic way according to different academic levels. Notes in MeroSpark are in a very simple language which helps to understand easily to all level of students.

The first MeroSpark app launched was Android platform based named ‘Mero Spark (HSEB English)’. The developer, Mr. Sanam Shrestha developed this app with the technical cooperation of KTM Studio; it was launched in 2015 and was made available in Google Play Store. This application provided reference notes only on English based subject of HSEB Curriculum. This application received massive popularity as it surpassed 5,000 downloads. 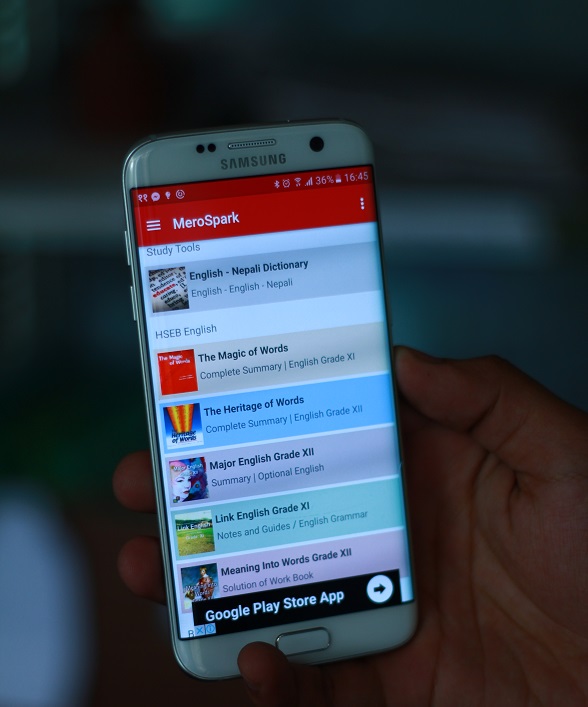 The recognition of the first application encouraged the MeroSpark team to launch another app with additional contents and better user interface. The second app was also Android platform based named ‘MeroSpark’ and was the improved version of the first application. The founder, Mr. Hari Prasad Chaudhary developed this app alongside the technical cooperation of NepSpark Technology. This application was launched in February 2016 and was available in Google Play Store. This application received even more popularity. In the time period of just three months, the download count crossed 5,000 downloads.

Recently, MeroSpark created a milestone after launching its first iOS app. The MeroSpark team successfully launched the MeroSpark iOS app in the iOS app store, along the technical support of Mr. Aakash Giri. Currently, the user interface for both Android and iOS is same, with the same contents. Mr. Sanam Shrestha, the developer of iOS app says, “We are expecting a positive response from all our well wishers, so that, we can further work to improve the quality of our contents.” MeroSpark claims to be the first app developers to launch the reference education app based on the academic curriculum in Nepal (HSEB), for the iOS platform. The founder, Mr. Hari Prasad Chaudhary expresses his gratification saying.”We’re really grateful to all our well wishers who encouraged us with their unexpected responses, and we assure everybody that we will provide more reference academic notes and work to expand our contents as well as we’ll come up with an app for Windows platform soon.”

The content advisor of MeroSpark, Mr. Aagan Maskey informs that the app had been placed under the ‘Trending’ section in Google Play Store, during the (HSEB) board examination period. The new iOS app is also being highly supported and is helping to provide the students with quality reference notes based on the HSEB Curriculum. A lot of students are seemed to be satisfied with the effort of MeroSpark.