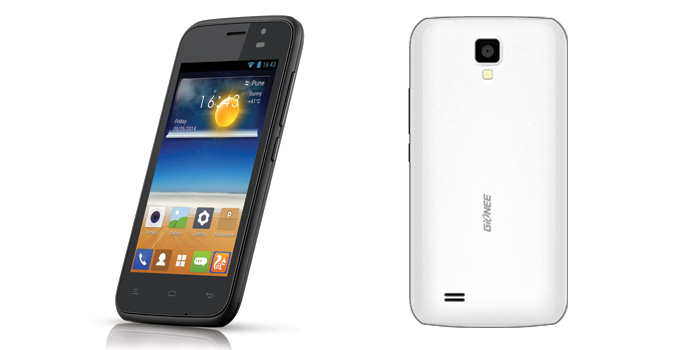 Gionee P4S, priced at Rs.12,796, has a 4.5 inch with a resolution of 480 x 854 pixels. Under the hood, there is a 1.3 GHz Quad Core MediaTek processor,1GB of RAM, 8GB of internal storage which can be further upgraded by microSD card slot upto 32GB. The phone boasts a 5MP primary camera with LED flash and a 2MP secondary camera. It has 2 SIM slots (2G+3G) and includes connectivity features like Wi-Fi, Hotspot and GPS. There is an 1800 mAh removable battery and the phone runs on Android Kitkat 4.4.

Gionee P6, priced at Rs.14,300, sports a 5-inch display with 480 x 854 pixels of resolution, 1.3GHz MediaTek quad-core processor coupled with 1GB of RAM and 8GB of internal storage which can be expanded via memory card slot upto 32GB. The P6 comes equipped with a 5MP rear snapper with LED flash and a 2MP front-facing camera with LED flash. There is a 1,950mAh battery and the phone runs Kitkat 4.4.2 out of the box.

All these products come with a one-year warranty on the handset and 6 months of warranty on battery. The in-box contents include charger, handsfree, phone stand, flip cover, and a screen protector.