One of the most popular Chinese Smartphone manufacturer Gionee has been coming up with gadgets and designs that are really attractive in the Nepali market and also in the worldwide scenario. Tele Talk Pvt. Ltd., the authorized distributor of Gionee in Nepal, has recently released a budget smartphone: Gionee X1, priced at Rs. 13,999. In its previous productions, Gionee has been prioritizing in the camera and the battery because of which it has sustained its presence in the Nepali market. Will the Gionee X1 be able to uphold the same legacy?

I used the phone for a week and tested its marketed features and specifications. Now, I would like to walk you through its detailed review:

The Gionee X1 has a faux-metal design, that has been designed very convincingly and cleverly. The device felt really premium while holding but during continuous usage, it kept getting heated up. Hence, at times, it felt really uncomfortable. The buttons have been placed efficiently on the lateral side of the phone. And as the phone was light, it offered an easy one-hand usability. All in all, the phone felt really smooth and premium besides the occasional warming-up.

The X1 comes with a 5-inch IPS display but lacks a screen protector. More often than not, I have been very prone to accidents, so yes, using the phone without any screen protection was a very cautious experience for me. 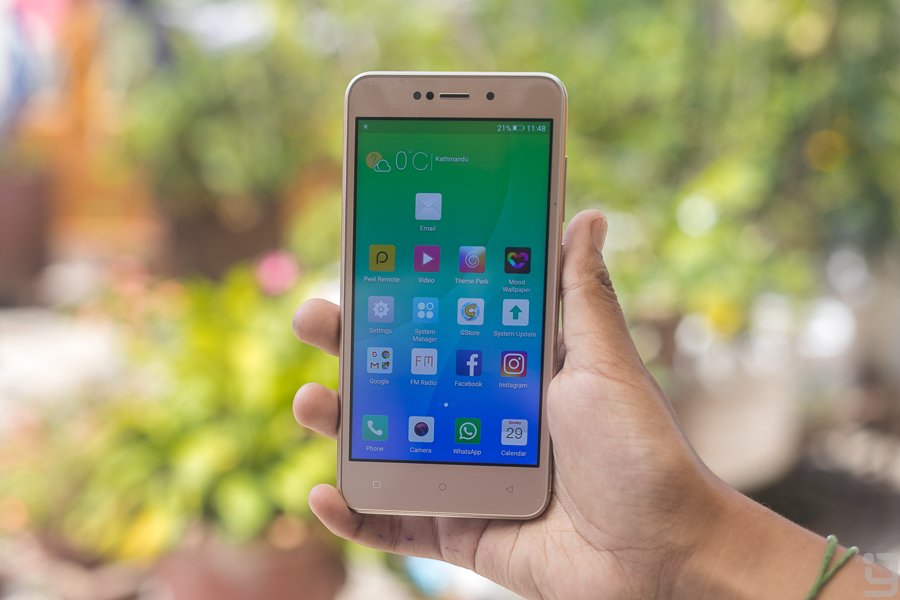 The HD (720 x 1280 pixels) with 294 PPI Pixel density display felt a bit too lacking for me. Smartphones within this budget range from brands like Samsung have a slightly better display quality. Nonetheless, the display is still decent for its price tag.

The phone features power and volume buttons on the lateral side to the right and a 3.5mm slot for a headphone jack at the top. For charging, the device has micro USB 2.0 port at the bottom and features speakers at the back side. The output sound quality is also loud and clear. 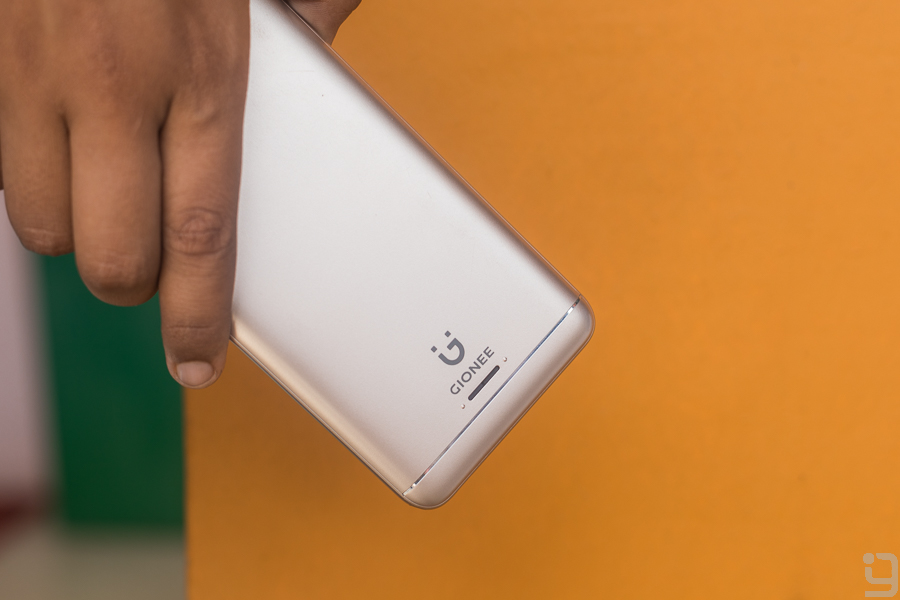 The X1 features a really smart fingerprint sensor at the back. The fingerprint sensor is one of the few things I really loved about the phone, as it was really quick and smart enough to keep the contents hidden and unlock the phone whenever necessary.

On the software side, the Gionee X1 features Amigo UI 4.0 paired with Android Nougat. I really liked the UI and the design that it offered, just for its simplicity. Other than that, there is not anything that specific about the phone.

The smartphone is powered by a MediaTek (MT6737) quad-core processor which is clocked at 1.3GHz speed and comes with a 64-bit processor.

During my use, I had tried testing the limits of the processor of the phone by running multiple heavy apps and games at the same time. And I must say that I was not disappointed. Not once did the device crashed and lit up with a dialogue box pop-up saying “Unfortunately, the app has stopped.”. But, as I said earlier about the display capacity of the phone, my gaming experience was not as good as it could have been with this satisfying processor performance. Also, as the phone kept getting heated u pretty quickly, I had to keep the usage minimalist.

To speak of the cameras that the phone featured i.e. both 8MP (at the front and at the back),  the pictures taken were good enough with sufficient details to replicate the natural color tone. The phone features a lot of photography modes like Night Mode, Professional Mode, Card Scanner, Code Reader, Note Taking and HDR among others. As I have to leave home early every morning for college, travel during the day for work and return home late in the afternoon travel, I must say I had a good time checking out these features during bus-rides, lunch hours and classroom breaks. With all these inbuilt features in the camera for a smartphone of this budget range, it was certainly a big WOW factor.

The Gionee X1 comes with Dual-SIM (nano+nano), 4G VoLTE, Bluetooth 4.2, GPS, Wi-Fi 802.11 b/g/n, FM Radio and USB OTG regarding connectivity. As the device is OTG compatible, it can be used to transfer battery juice and files to another device.

The 3000mAh battery is more than enough to back up and support the phone! The company had said that the phone will provide 209 hours of standby on 4G network, 27 hours of talk time on the 2G network, 18.5 hours of music, and 5 hours of video playback. And, just as promised, the phone provides a decent amount of backup. The device backed me up for a day and a half on normal usage with a couple of games and online applications. However, as the phone did not contain a quick charge functionality, it felt bothersome to wait for the phone to charge fully.

All in all, I must say that I had a really nice time experiencing all the features that the phone has up for offer. I also asked opinions of a few of my friends and acquaintances at work about what their first thought of the phone was. Most of them had good things to say about the phone and all of them had a shocked expression (none could believe that a phone that felt that premium could be priced at Ra. 13,999) painted on their faces once I told them the price of the phone.

What I liked about the Gionee X1?

What could have been better in the Gionee X1?