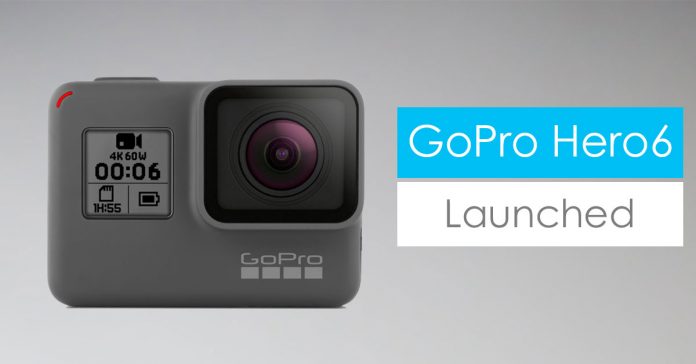 GoPro today revealed its latest action cam, the GoPro Hero 6 Black. The Hero 6 sees no new improvement on the exterior but a lot of vital changes have been made internally. It enjoys a lot richer and better features which the users have been demanding for years.

GoPro Hero 6 Black comes with a 12MP camera, same as the Hero 5, which can shoot in both RAW and JPEG. But it has better low-light imaging and dynamic range. The biggest change in GoPro Hero 6 is; it now can shoot 4K videos at 60fps. The 4K at 30fps on the previous model just wasn’t enough for adventure junkies. It can also shoot 2.7K at 120fps and 1080p at 240fps. These higher frame rates are going to make the videos much smoother, plus superfine slo-mo are going to get awesome. The action cam also gets electronic image stabilization.

These advancements are possible with the new custom GP1 processor which took 3 years to make. Previously GoPro used Ambarella chips which many of the Chinese counterparts have been using to make cheaper action cam. This custom chipset will help to add-in custom features and make the new GoPro cams stand out.

Lookswise it is identical to Hero 5 with a rugged body and 2-inch LCD display. It is waterproof up to 33feet. The action cam comes with built-in GPS, voice control, auto-editing, and 5GHz WiFi support. The battery life is going to be same as the Hero 5 which is around 1 hour 20 minutes of 4K recording with stabilization off. The GoPro Hero 6 costs $499 which is $100 more than the previous model. GoPro also introduced its 360-degree camera called the GoPro Fusion priced $699 and ships in November. The fusion will be compatible with most of the GoPro mounts. It sports two 18MP cameras which can shoot up to 5.2K at 30fps. This dual combo can capture 360 videos with sound and is waterproof up to 16 feet.