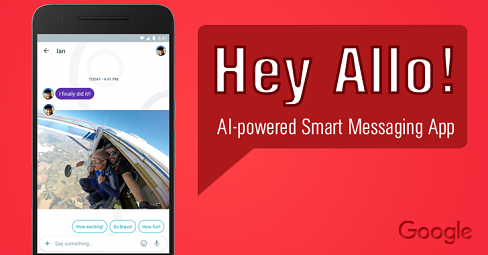 Good news, people. Google has finally released the Google Allo app today! For those of you who do not know, Allo is basically a text-messaging app with a twist – it has tons more features than what any other messaging apps feature.

Google had announced the apps Allo and Duo at Google I/O this year. The company had released Google Duo couple of months back. Duo is a simple video chatting app. It sports a simplistic design, and more importantly, people can see each other’s video without even receiving the video call. So, all in all, it’s probably the fastest video chatting app there is. It uses your smartphone’s contact rather than your gmail. I personally don’t use it because only a few people in my contact list have installed the app which is a bummer.

What is Google Allo?

Google Allo is basically a text-messaging app that is sort of equipped with an in-built intelligence. Google made this app because of the failure of Hangouts. And looking at its feature, Allo looks set to be a hit. It could prove to be a competition for the messaging apps like Apple’s iMessage, Viber, and Facebook’s Whatsapp and Messenger.

Google released the app in a time when the fore mentioned apps have been people’s choice for a long time. Google looks to counter this with a solution: Allo’s in-built Assistant. This Assistant is the core to Google’s strategy in making this app a hit. Also, you can talk to the Assistant itself. The app also features ‘Smart Reply’. The feature will be able to suggest you replies to particular texts. A creepy but a nice feature indeed. As time passes, it will adapt to the way you reply to people and suggest you replies in that manner.

Here are all the top features of Google Allo:

Like I mentioned before, this app offers Smart Reply – a feature that can quickly understand what the respondent has replied and suggest you a reply for that. Google showed this feature in Google I/O. Let me explain this by an example. When someone sends you a picture of a dog, you probably reply by typing ‘awww’ or ‘cute’. So, with Smart Reply, the app instantly suggests you these replies. And not only that, the app will also suggest you something like ‘nice picture of a German Shepherd’ or a reply similar to that. Smart Reply here read the picture, figured out the breed of the dog and suggested you the response. Google has said that Smart Reply will become smarter and will be able to suggest you phrases and sentences as time passes. A weird feature that will come handy.

Assistant is another important feature of the Google Allo. It will assist you when texting by suggesting you about the topic you’re talking about. In Google I/O, it was shown that when you text someone with like ‘I’m hungry’, it will instantly show you the restaurants near you. You’ll also be able to play games Google is currently providing. The Assistant will also be able to perform basic ‘Google Now’ functions like setting a reminder. You can also talk to the Assistant like you do with Google Now or Siri or Cortana, which is sure to be fun.

You have probably used the ‘Incognito’ feature in Google Chrome. Google Allo has been equipped with the incognito feature which sort of does similar work. When you enable this feature, your messages will be encrypted end-to-end and no one will be able to hack into your chats and read the texts. You will also be able to set an expiration date for the messages according to your needs.

Ever had to give an angry response to someone using all capital letters? Or ever had a situation where you wanted to reply something like you would do when whispering? Google Allo solves all this problem with its ‘Whisper and Shout’ feature. You can simply make the size of the letters in your replies bigger or smaller, depending on the situation. Emphasize your text by enlarging your words, or deemphasize them by making them smaller. Replying has never been this easy! You can simply exercise this feature by pressing and holding the send button and sliding it up or down to increase or decrease your text size.

These are the features other messaging apps already have. You can basically reply someone with the stickers, similar to that of Viber and Facebook Messenger. And just like in Viber, you’ll be able to scribble something in a picture you’re about to send.

Google has promised that the all the texts are secure and the messages will not be stored it in its server. The company hasn’t released the app in Nepal at the time of my writing. You can find apk files of Google Allo too, but it’s up to you on whether you want to download it officially or unofficially. You can currently register for the download of the app once it is available.

All in all, Google has brought a lot into the smartphone world with the release of Allo and Duo. Allo, in particular, certainly looks promising but we have to wait to see how it will fair in the real world.