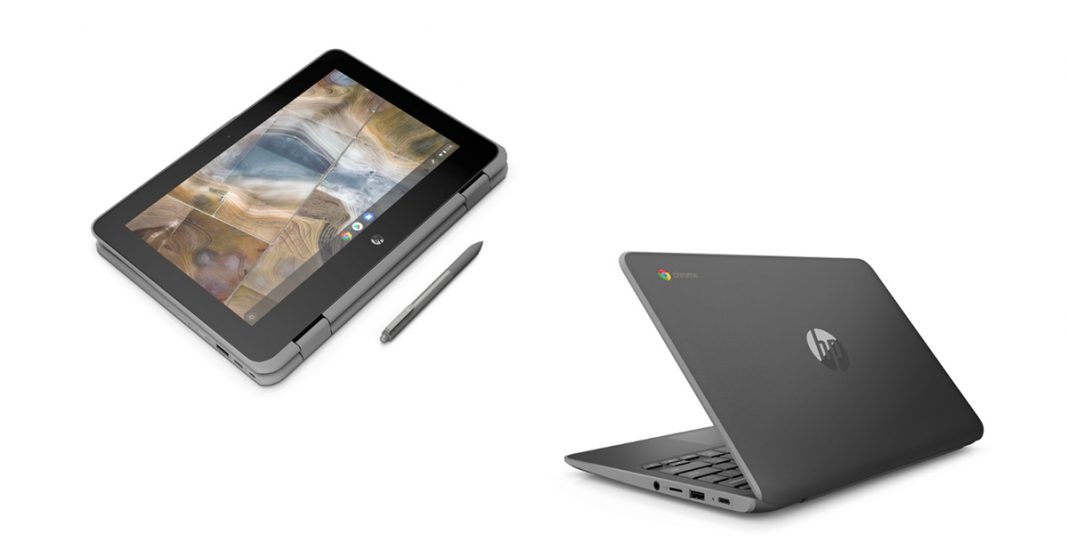 HP’s refresh of their Chromebook lineup sees it bring two new laptops intended for the upcoming school year. Both feature rugged exterior, thanks to the MIL-STD-810G testing simulations and gets a spill-resistant keyboard. This should keep the laptops safe from the clumsy hands of young school kids set out to shape our world.

The first of which is the HP Chromebook x360 11 G2 EE, a 2-in-1 laptop with an 11″ (1366x768px) IPS touch display with Wacom EMR pen support. Powering the laptop is a dual-core Celeron N4000 processor or a slightly powerful Quad Core Celeron N4100. Both seem pretty underpowered but their use cases should remain pretty moderate. Either way, both get 8GB of RAM with 32GB or 64GB of eMMC storage. The laptop is fairly heavy for its size at 1.47kg, although still very portable and should not be a burden for kids to take those to school every day. HP promises a creditable 11.5 hours of usage without the need to plug in a charger, and when you do, it recharges quickly too. Battery life also sees a bump at 13-hours for the non-touch version while the touch display manages 11.5 hours. Apart from the display, battery life and hinge, all other aspects of the laptops remain the same. Both come with two USB-C Gen 1 ports (one on each side), a USB-A port, 3.5mm headphone jack, and an SD card slot.

They also get 802.11ac Wi-Fi and Bluetooth 5.0. There is a 720p front-facing camera and a 5MP “World-Facing” camera. The later is said to deliver augmented learning experience for the students. All these features were designed with simplicity, security, pricing, and shareability in mid, fitting for kids who want to learn.

HP reports that over 30 million students and teachers are using Chromebooks today, of which the majority of the schools are located in US, Canada, New Zeland & Sweden.

Both laptops will hit the markets in April with prices yet to be disclosed.