After creating hypes through different teasers, Huawei has finally launched the P50 Pocket. It’s the first clamshell foldable from the company, while Huawei already has three folding phones under the “Mate X” series. In this article, we will be discussing the key specs, features, expected price in Nepal, and availability of the Huawei P50 Pocket.

As mentioned earlier, Huawei P50 Pocket comes with a clamshell design. This form factor brings comparisons with Samsung’s Galaxy Z Flip 3. However, P50 Pocket has some distinctive design elements that help differentiate it from the competition.

First, this one has 3D microtextures on its exoskeleton. It is available in two colors: Black and White. There is also a Premium Edition that incorporates more intricated Golden textures, designed by Iris Van Herpen.

Similarly, the rear and cover screen camera modules here are circular, imitating the camera islands of the P50 series.

Finally, Huawei has used an advanced hinge that allows for gapless folding. Thus, the phone has a flat uniform thickness when its folded state.

Then there’s the 1.04-inch circular cover display on the outer panel. While it’s a standard 60Hz OLED display, it enjoys a 120Hz touch sampling rate. 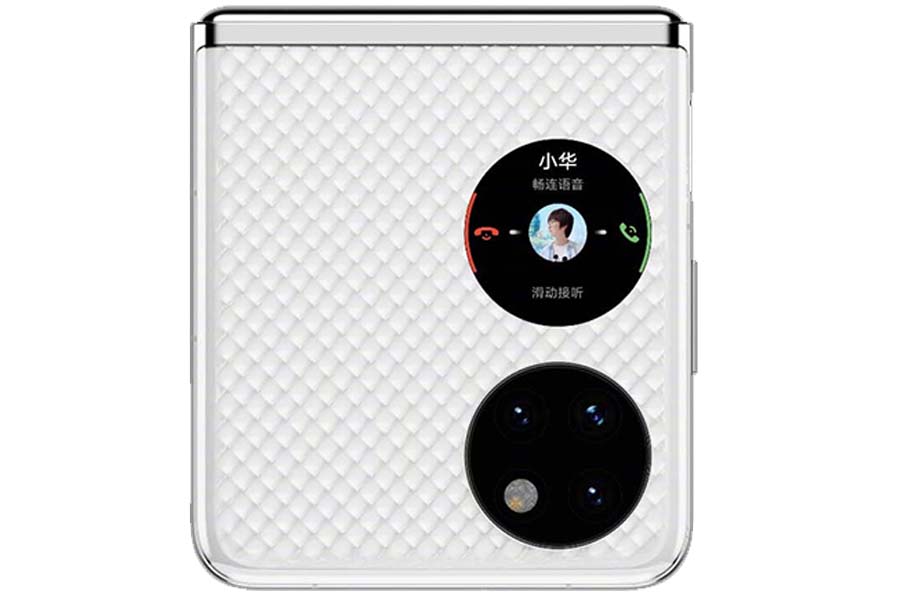 The cover screen gives you quick access to notifications, incoming calls, and the camera. In addition, it even supports app widgets. Thus, you can control music playback and even use maps when the phone is folded. There is also a feature called “Sunscreen Detection” that shows users the sunscreen-applied face area with a purple shade.

Inside, the P50 Pocket packs last year’s Snapdragon 888 chipset but with no 5G modem onboard. That’s because Qualcomm can’t export 5G chips to Huawei because of the ongoing ban. This has been paired with 8GB RAM and 256GB internal storage. The Premium Edition, on the other hand, gets a 12GB + 512GB memory configuration.

Moving on, the circular camera module at the back is home to a 40MP triple camera setup. Unlike the standard P50 series, it doesn’t get the Leica treatment though. Instead, it’s backed by Huawei XD Optics and True Chrome Image Engine.

Moreover, you get a 40MP main sensor with a 26mm equivalent lens. Accompanying it is a 13MP ultrawide camera. The third camera is a 32MP Super Spectrum sensor, that the company claims, will bring out richer colors. Over on the inside, you get a 10MP selfie camera with an f/2.2 aperture lens.

Fueling the P50 Pocket is a 4,000mAh battery that supports 40W Huawei SuperCharge fast charging. It runs on EMUI 12 based on HarmonyOS 2.0. Huawei has included a side-mounted fingerprint scanner for biometrics.

Huawei P50 Pocket is available in China where it starts at CNY 8,988, while the Premium Edition costs CNY 10,988. GSMArena says the phone is coming to the global markets too, although there’s no official word on that yet. We expect the price of the Huawei P50 Pocket in Nepal to start at NPR 180,000 if it launches here.