At a time when smartphones are getting considerably larger year after year, Samsung is leading the battle to combat this with its Galaxy Z Fold and Z Flip smartphone lineups. I’ve used the new Samsung Galaxy Z Flip 3 for a couple of days and here, I’ll be sharing my initial impressions of the phone.

While being a foldable phone, the Flip 3 is not just for power users—it’s for regular users as well. It is Samsung’s third generation of Flip device, which was unveiled recently alongside the Galaxy Z Fold 3, Buds 2, and the Watch 4 series.

Personally, I love the idea of folding a smartphone to shrink it to half its size. And, this is exactly what the Flip 3 achieves with its folding mechanism. Compared to last year’s Z Flip or Z Flip 5G, this one comes with a few important upgrades.

First and foremost, Samsung has included a tougher glass up front, protected by Corning’s Gorilla Glass DX for the cover display—while the exterior front cover gets the Victus treatment. 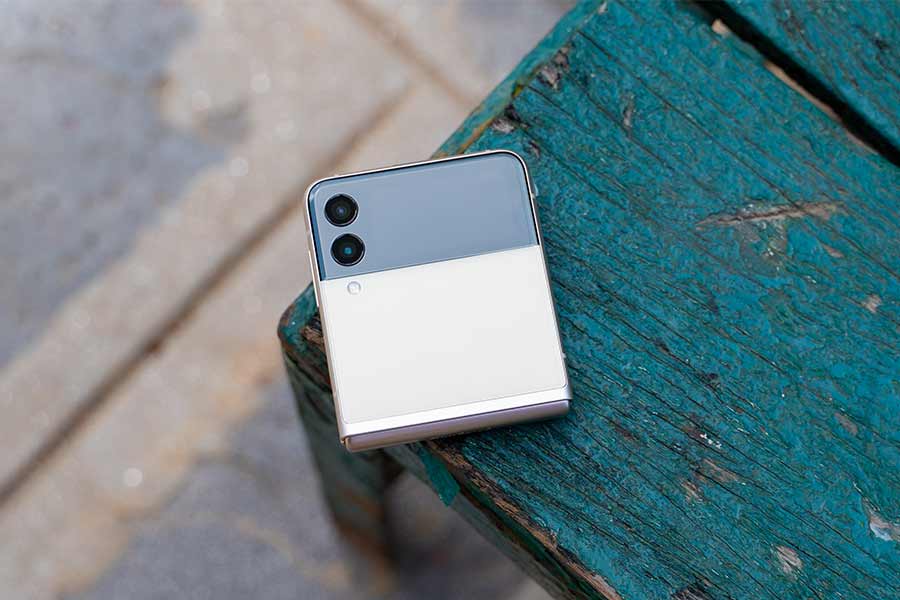 You might be aware that the first-generation Z Flip was widely chastised for using soft glass. Addressing this, the Flip 3 comes with a PET screen protector on top, rather than TPU, which is 36% tougher according to the official claim. At just 183 grams, the phone feels adequately lightweight as well.

We know that Samsung positions its Z Fold lineup as a luxury, business-class device, while the Flip series falls more into the lifestyle category targeted towards the younger generation. As a result, the Flip 3 enjoys fun color options such as Lavender, Green, Cream, and Phantom Black.

Yup, the Flip is water-resistant

Moving on, the company has also addressed some major durability issues with the Flip 3. The phone is IPX8 water-resistant, which means it can endure being submerged in water for half an hour at up to 1.5 meters.

Unfortunately, the ‘X’ in the rating signifies that it does not have IP certification for dust protection. Even though, the sweeper technology inside the hinge should prevent small dust particles from getting in. 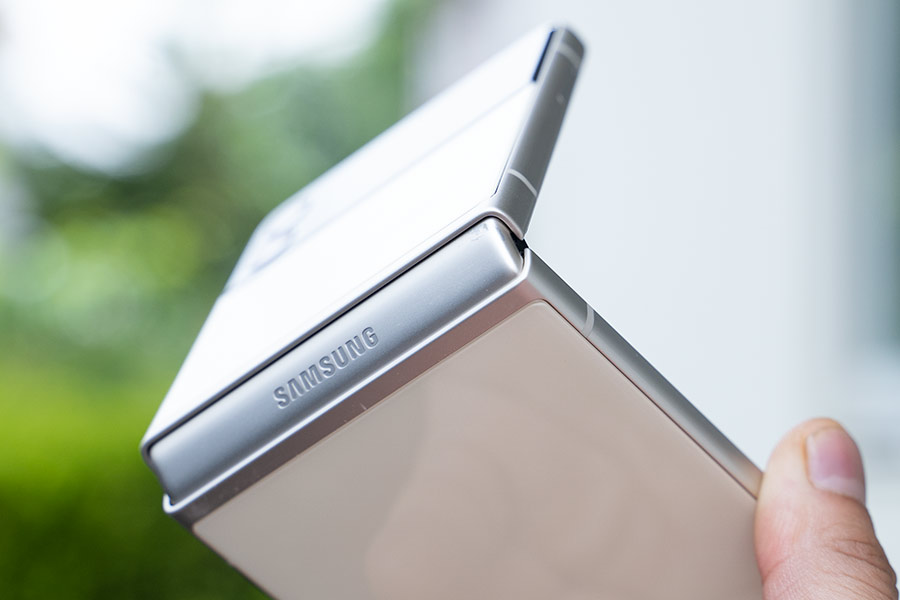 Likewise, Galaxy Z Flip 3’s back panel is protected by Gorilla Glass Victus, while the frames, as well as the hinge, are made of Armor aluminum. Samsung says that this is 10% tougher than regular frames on the Z Flip and Z Flip 5G.

According to the firm, the hinge has been tested 200,000 times to assure long-term reliability—just like on its predecessors. Aside from that, the phone has a side-mounted fingerprint sensor for biometrics.

Anyways, the phone unfolds to a tall 6.7-inches Dynamic AMOLED screen with a 120Hz adaptive refresh rate. It means, it can swing between 60-120Hz depending on the type of content on the display. As expected from a Samsung panel, well, it is top-notch and I’m fond of its responsiveness too. It’s just that watching YouTube videos with those black bars around the corners feels odd. Either that, or you’ll have to crop the videos a lot to fill up the screen completely. So I’m still getting accustomed to this wide aspect ratio.

Plus, you will also notice quite a bit of bezel on all four sides of the display. But since that’s necessary to protect the screen, that’s okay I guess. In addition, while scrolling through the display, I was often weirded out when my fingers clashed with the hinge in the middle. Still, after using the phone for a while, it gets less noticeable.

Similarly, the cover display has had a major makeover, with this year’s Flip 3 featuring a much bigger 1.9-inch 60Hz display—contrary to the puny 1.1-inch panel on its past two iterations. Thanks to the larger screen real estate, the display actually delivers a series of practical functionalities.

For instance, viewing the notifications is much more pleasant here, and being able to click selfies without having to flip the screen is what I would call, convenient. Samsung even lets you customize the cover display with a widget of your choice. Further, scrolling down the screen triggers quick toggle options like screen brightness and volume adjustments.

Moving on to the cameras, Samsung has borrowed the same 12MP primary and 12MP ultrawide lens from the first-gen Z Flip. Upfront, there’s also the identical 10MP selfie shooter.

Now, I haven’t had a chance to take it for a thorough spin, but I did click a few shots from the rear and front. And, Samsung’s slightly saturated color optimization can be witnessed here. The pictures do look pleasing though.

But again, this is just my initial impression of these cameras, and I will go into this in greater detail in my complete review, so look out for that.

Performance-wise, you get Qualcomm’s top-of-the-line Snapdragon 888 chipset under the hood. Actually, this is just the second time I am using the Snapdragon variant of a Samsung flagship, following the Z Fold 2 last year, so I’m really pumped about it.

On my initial impressions, its performance has been stellar. In my brief time with the phone, I haven’t faced a single hiccup in animations or transitions. Additionally, because the Flip 3 has a tall aspect ratio, gaming has also been a good experience so far—at least in terms of how they look.

Moving on, I also like the fact that Samsung has well-optimized One UI here. And that is seen in features like app continuity. For instance, if I have the selfie camera open on the cover screen, flipping the phone open effortlessly continues with the same app. This applies to other apps like Phone Dialer and Music Player as well.

Now, because of the large layout of this screen, the top edge isn’t easily reachable with one hand. Yet, One UI does make it a bit easier while using the phone. That being said, the coolest feature of the Z Flip 3 has to be the Flex Mode, which allows it to stand on its own at a 90-degree angle.

As a result, I can simply keep it at my bedside and let it showcase it like a clock. On the other hand, attending online meetings is quite fun now, as I don’t have to look for something to hold the phone stable on a surface or use my hand to do so. It can even act as a tripod for shooting videos and selfies.

I believe that the possibilities of this feature will pique the interest of content creators in particular. Right now, there are only a handful of apps that fully support Flex mode, although you do have the option to go to the settings and enable it for other desired apps as well.

On the battery front, Samsung has fitted a dual-cell battery here. The top half of the phone encompasses a comparatively smaller 930mAh cell, while the bottom half houses a bigger 2370mAh cell. This totals to a 3300mAh battery, which is the same capacity as on last year’s Z Flip. To reemphasize, I’ve only had this phone for a day, so I can’t really comment on its battery endurance just yet. But, considering how this relatively smaller battery has to fuel a huge 120Hz screen as well as the cover display, I’m assuming its screen-on time will be just average.

Then again, that’s a direct trade-off to maintain Z Flip 3’s form factor itself, since including a bigger battery would compromise the phone’s slim design. In terms of charging, you get 15-watt wired charging support—the same as on previous Z Flip phones.

I had hoped for Samsung to include a faster charging mechanism, especially considering that the device has a fairly small battery, in a dual-cell configuration. Over on the audio, it has a stereo speaker setup which also supports Dolby Atmos audio.

So, there you have it guys, my initial impressions of the all-new Samsung Galaxy Z Flip 3. It’s easily the most interesting and the narrow phone I’ve used in a while. Plus, the well-optimized One UI of the Flip 3 is the cherry on the top. However, for a thorough review, I will be using it as my daily driver for the upcoming days, so stay tuned for more.