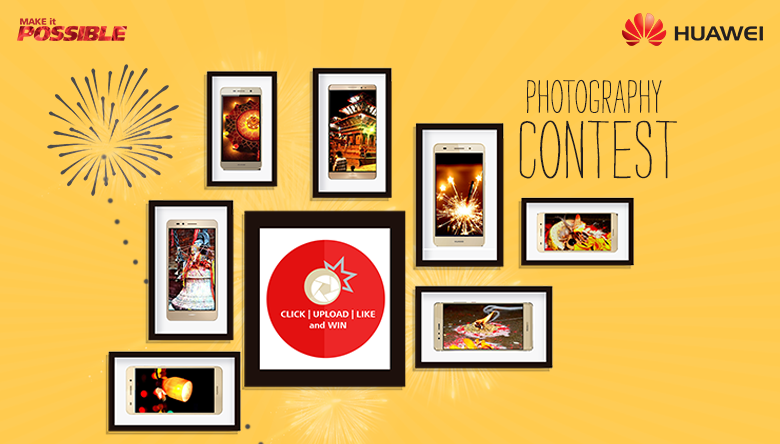 Huawei Mobiles Nepal is organizing a Tihar Photography Contest where you get a chance to win a brand new Huawei P9. Participating in this contest in super simple as you need to share your best-captured Tihar moments in this link. The photo will then be uploaded in the Huawei Mobiles Facebook page and the the participants with the highest number of likes will win the contest.

The Huawei P9, priced at Rs. 59,999 is one of the best camera phones you can buy right now. It sports a dual camera sensor; both the camera with a 12MP sensor. The first camera has an RGB sensor and the second camera has a monochrome sensor which only takes black and white photos. Both the camera simultaneously takes the photo and combines them to produce a greater quality image.

The monochrome sensor allows the camera to capture just the light, not the color, so it has higher details and sharpness, while the RGB sensor takes the photo in color which filters the lights coming to its sensor resulting in loss of details so when both the photos are combined a better quality image is obtained. This is noticeable particularly in bright highlights and dark shadows where details are easily missed by single/small sensors.

Also, the dual camera sensor on the Huawei P9 allows us to select multiple focus points which give a greater depth of field with closer shots. But the P9 doesn’t come with Optical Image Stabilization. All and all the camera on P9 is supposed to be crazy fast and take high-quality photos and seems like the dual camera will be a thing in all smartphones in coming years but as of now only the P9 and LG G5 have a dual camera.

Step 1 : Participant will have to send us their photo with Tihar theme through our Facebook application (pictures with gambling and alcohol won’t be entered in the contest).
Step 2 : The photo sent by the participants will be designed in the template and posted in an album on the official Facebook page of Huawei Mobile Nepal.
Step 3 : The participant will then have to collect maximum likes on their photo to win the contest.

1. This Campaign is open from 28th October, 2016 to 17th November, 2016.
2. The last date for submitting your entries is 10th November, 2016. Participants can collect their likes till 17th November, 2016 11:59 AM.
3. The winner will be announced on 21st November, 2016.
4. Participants with the maximum likes will be declared as the winner.
5. Only Nepali citizens residing in Nepal can participate in the contest. The participant with abusive past campaign history will not be accepted in the contest. As the campaign is organized by the professionals no further participation will be allowed.
6. Likes from Facebook users from within Nepal will only be considered as genuine and entertained in final results. In case of any automated or fake likes, the contestant and the entry will be immediately disqualified.
7. Any post or comment that are false, defamatory, inaccurate, abusive will be deleted immediately with no clarification.
8. Participants can upload the picture taken from any Smartphone.
9. Huawei Mobile Nepal holds the right to use the picture/entry of the participants/winner for the purpose of any promotion purpose for use in print advertisement/outdoors and digital media.
10. In case of contestants receiving equal number of likes in form of votes for their entries, in such scenario the winner will be chosen through a lucky draw.
11. The participants must present genuine information about themselves during entry process based on fact and must be reachable, which shall be considered as final and reference in case of announcement of winner and awarding of the prize. In case of any false information/details that is noticed in case of the winner, in such scenario the contestant/entry with the second highest likes in form of votes shall be declared as the winner.
12. Employees and family members of Huawei Mobile Nepal and the Vendor Agency shall not be eligible to participate in the contest. In case the winner is found to be in any way associated as Employee or Family Member, the entry and the contestant will be disqualified.