MediaTek has usually focused on making chipsets for budget and lower mid-range phones. So the company generally doesn’t make hot news in the tech industry. But seems like things are going really well for MediaTek, the company is making headlines one after another. Intel’s partnership with MediaTek dearly increased MediaTek’s goodwill. And not so long after the announcement of the partnership, MediaTek brought another big news to get the tech enthusiasts awe-inspired. And this time with a 5G chipset. Dubbed as MediaTek Dimensity 1000, the chipset is the first 5G SoC from the company. Up until now, MediaTek was playing in the mid-range and budget segments. But this might open the door for the company’s presence on the flagship segment in the future.

With the new 5G chipset, MediaTek created another separate lineup with the “Dimensity” moniker. As MediaTek generally brings the Helio-series processor, the change in the name might’ve got you confused. But the company says, it’s basically to differentiate the 5G SoCs from the 4G Helio line-up.

“We chose the name Dimensity to highlight how our 5G solutions are driving new waves of innovation and experiences, much like the fabled fifth dimension,” – MediaTek President Joe Chen.

On the CPU side, Dimensity 1000 has employed Cortex A77 cores, which is not a surprise by the way. When ARM had revealed its new microarchitecture, MediaTek couldn’t resist. Just a few days later, the Taiwanese company announced that it would bring its own flagship chipset based on the new IP. But this time, the company has explicitly divulged the core configuration. It’s based on big.Little architecture with four performance cores and four power-efficient cores. As already mentioned, Cortex A77 is used for the performance cores, which is clocked at 2.6GHz. Similarly, four Cortex A55 cores are used for power efficiency, which is clocked at 2.0GHz clock speed. 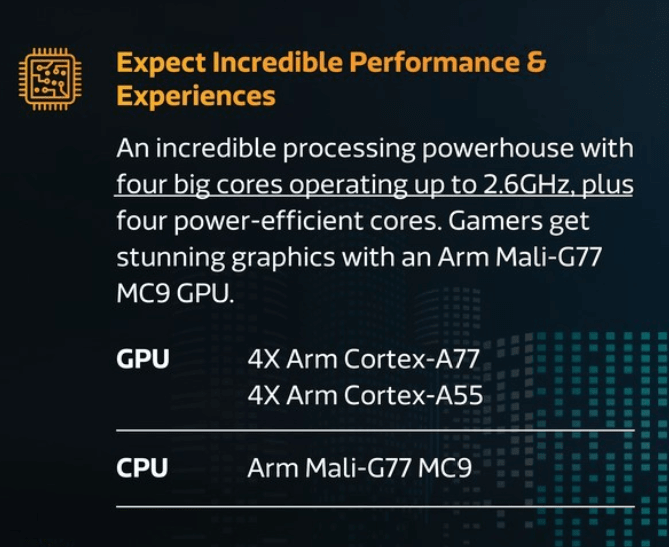 For a fair bit of time, MediaTek used 12nm architecture. But this time, the company made a significant jump to the 7nm process. And this improvement might also help MediaTek to keep up with its competitors.

As for the GPU, there is a new Mali-G77 GPU in the MP9 configuration. This GPU setup is 19% smaller than the MP11 configuration on Samsung’s Exynos 990 chipset. But as MediaTek hasn’t yet revealed the GPU clock frequency, the GPU performance cannot be yet predicted. But as we know that Mali-G77 is a new and fairly capable GPU, it might offer good competition to the big players like Samsung, Qualcomm, and Huawei.

Even on the AI processing, the company made a big leap. The Dimensity 1000 SoC uses MediaTek’s third-gen AI Processing Unit (APU/NPU) to perform all sorts of AI-related tasks inside the device. It’s said to perform more than two times better than MediaTek’s previous APU. The APU core configuration involves two big cores, three little cores, and one “tiny” core. Apart from that, Dimensity 1000 fully supports the NNAPI features while its competitors like Qualcomm or Samsung still have incomplete support. So MediaTek will now have an upperhand in AI benchmarks.

Talking about the memory specifications, the D1000 SoC supports LPDDR4X memory, with the maximum support for up to 16GB RAM.

For better image processing, MediaTek has significantly improved the ISP on this new chipset. The chipset comes with five-cores of ISP, which happened for the first time in the tech industry. For better image processing, Dimensity 1000 makes use of MediaTek’s Imagiq+ technology. And it supports camera sensors with resolutions of up to 80MP at 24fps or a multi-camera setup with 32MP+16MP sensors.

To further improve the image processing, the chip also makes use of its APU. The APU supports advanced AI-camera enhancements for autofocus, auto exposure, auto white balance, noise reduction, HDR and facial detection. Apart from the MediaTek is also making claims that the SoC has the capability for multi-frame HDR video processing. And again, Dimensity 1000 is the first SoC in the industry to do such kind of processing. The video recording can go up to 4K resolution at 60fps, which is nothing new here. However, MediaTek made another record with the capability of recording 4K 60fps in Google’s AV1 format. Apart from AV1, the chipset supports formats like H264, HEVC, and VP9.

This SoC also supports sub-6GHz 5G connectivity in both SA and NSA with the download speed extending to 4600Mbps and upload speeds to 2500Mbps. However, millimeter-wave (mmWave) 5G is absent.  Another impressive on the chip is its dual 5G SIM technology with additional support for services like Voice over New Radio (VoNR). Furthermore, the Dimensity 1000 integrates the latest Wi-Fi 6 (2×2 802.11ax) and Bluetooth 5.1+ standards.