MediaTek has beaten Qualcomm in introducing the world’s first 4nm mobile chipset. The Taiwanese company just announced the Dimensity 9000 5G, which is based on TSMC’s 4nm process. Here, we will be discussing the new MediaTek Dimensity 9000 5G in more detail, along with all its upgrades.

As mentioned earlier, the Dimensity 9000 5G is the world’s first mobile chip based on the new refined 4nm process. It also uses ARM’s new v9 architecture. Moreover, its octa-core CPU cluster is arranged in a 1+3+4 setup. 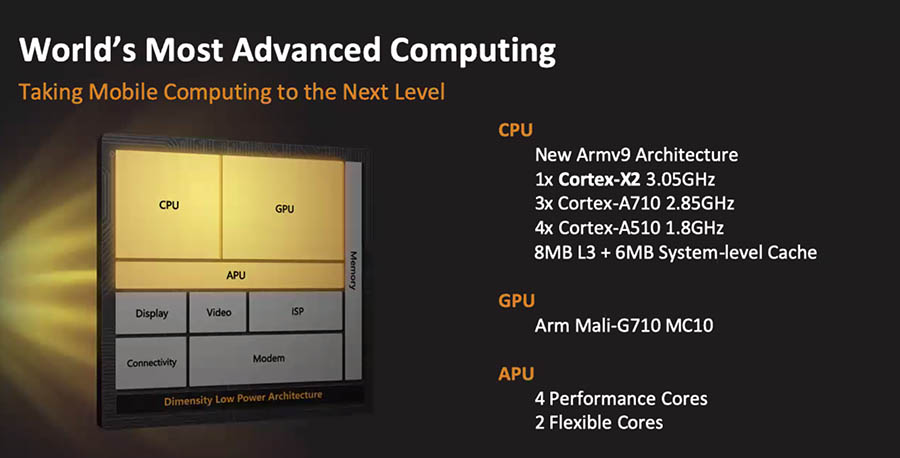 The prime or the ultra core here is the Cortex-X2—the successor to Cortex-X1. It is accompanied by three Cortex-A710 (successor to A78) cores clocked at 2.85GHz. In addition, there are four Cortex-A510 (successor to A55) cores (@1.8GHz) for efficiency tasks.

Dimensity 9000 5G also supports the recently announced LPDDR5x RAM, with a speed of up to 7500Mbps. According to the company, the increase of cache size from 8MB to 14MB (8MB L3 + 6MB SLC) on this chip improves performance by 7%, and bandwidth consumption by 25%.

The graphics are being rendered by Mali-G710 MC10. As the moniker indicates, it features 10 GPU cores. In addition, MediaTek is also making a new raytracing software development kit (SDK) for developers, that they can use to integrate the feature in their games.

The AI capabilities of the chip have quadrupled compared to the last generation too. Dimensity 9000’s APU consists of 4 performance and 2 flexible cores. MediaTek also claims that its APU can outperform Google’s Tensor by 16%.

Like the recent flagship offerings from Samsung and Qualcomm, Dimensity 9000 5G also features a triple Image Singal Processor (ISP). MediaTek says the chip can record 4K HDR videos simultaneously from three cameras. It even supports a single-camera setup of up to 320MP.

As for connectivity, the Dimensity 9000 complies with the 3GPP Release-16 standard. The integrated 5G modem supports a theoretical maximum download speed of 7Gbps with 3CC carrier aggregation. This is with the sub-6GHz 5G network, while it still doesn’t support the faster mmWave 5G. There is also support for Bluetooth 5.3 and Wi-Fi 6E on board.

MediaTek has already confirmed that it has started sampling the Dimensity 9000 5G to its customers. However, the first phone powered by the new chip will only arrive in Q1 of 2022. According to the rumors, the first batch of Dimensity 9000-powered smartphones are arriving from brands like Vivo, Realme, Xiaomi, Oppo, Samsung, Motorola, and OnePlus.