Home Micromax Micromax and Google Partnered to make a $32 Smartphone 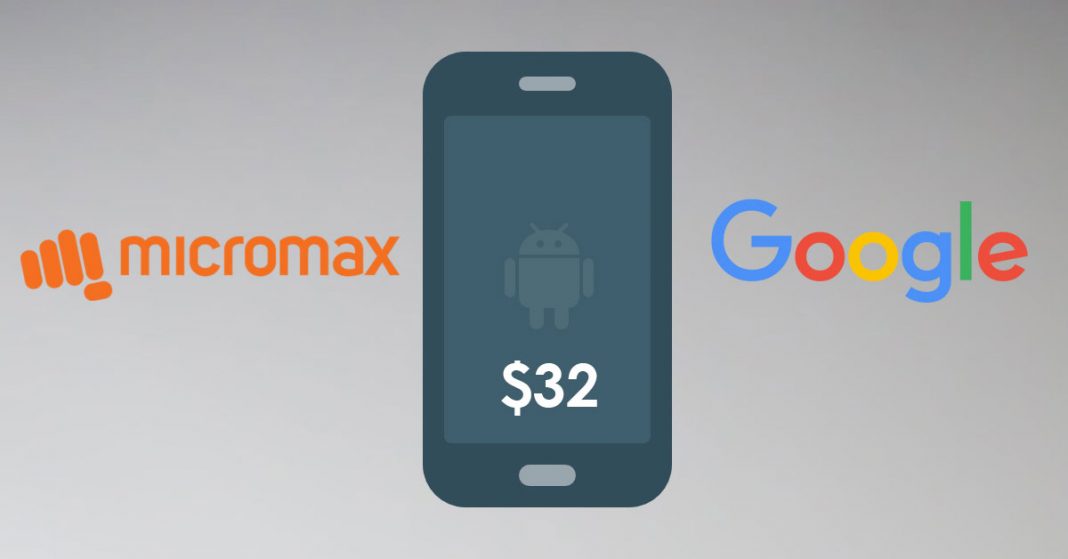 Android phones have gotten affordable than ever. You can get 4G enabled phones for as cheap as $100. But that was last year, Welcome to 2018, where smartphones are about to get cheaper than ever! On 26th January, Micromax in partnership with Google is set to launch the very first of Android Go smartphones in India. This phone will be priced at $32 which is close to around INR.2000 or NRs.3,200. At this point, it is almost unbelievable to imagine a phone for three thousand as all we can get is basic bar phones for that price. Apart from knowing that it’ll have a touchscreen and runs on Android Go (Lite version of Android Oreo), other specifications are still unknown.

Other Indian smartphone manufacturers are also on the same track but haven’t given a clear date for the launch of their products. Followed by Micromax, companies like Intex, Lava, Karbonn, and others are launching their own Android Go smartphones at a similar price point. So now we will have an extra category apart from budget, namely, Super Budget phones. Initializing with the Indian market, Google is aiming into other markets in the Middle East, Africa, South East Asia and Latin America. The current number of active Android users is over two billion. And so, Google wants to expand that to another billion by focusing those with a low budget.  Half of the feature phones that the manufacturers sell in India are all below the $32 mark. The Go phones, however, will have the advantage of a true and pure Google experience. And being the first manufacturer Micromax may have its upper hand on the market than other following companies.

So, this project is great for those consumers who switch to Chinese brands in search for low priced android phones with good specifications.

So what is Android Go? Android Go is the lite version of Android Oreo which will run on lesser hardware. It will run on devices with RAM as low as 512MB-1GB and devices with 8GB of storage. The inbuilt apps will consume less storage because of the optimised apps such as Google Go, Youtube Go, etc. These slimmed down apps use low space and give maximum performance even on low RAM. Nevertheless, it will retain the same taste and feel just like the original Androids. The phones will contain Qualcomm and MediaTek processor chip inside for the best performance. Android Go contains a built-in data manager which will help the user save and control more data.

“These phones get all the optimizations that come with Android Oreo (Go edition), including a better performing OS with built-in data management features and security benefits. There is also a new set of pre-installed Google apps, including Google Go and the Google Assistant for Android Oreo (Go edition), designed to be lighter and more relevant to the unique needs of the next billion users” Caesar Sengupta, VP, Next Billion Users team at Google had said in a blog post. Android Oreo (Go edition) smartphones also come with a version of the Google Play Store that allows people to download an app highlighting the apps designed to work best on Go edition devices. Despite that, in the end, user’s will prefer the Android experience that has fewer data cap overages and seamlessly cause fewer performance hiccups. And it may improve since there is still a stigma around using phones with less memory.