Microsoft has just announced its second dual-screen phone. The new Surface Duo 2 follows the same design language as its predecessor but packs some notable upgrades all around. Here, we will be looking at the specs, features, expected price, and availability of Microsoft Surface Duo 2 in Nepal.

Let’s start with the design first. Here, the Surface Duo 2 comes with two separate AMOLED panels connected by a hinge. It’s a different approach from the actual folding screens on the other folding phones, including Samsung’s latest Galaxy Z devices.

Moving on, these displays now measure 5.8-inch, up from the 5.6-inch on the first-gen Surface Duo. Together, they attain a diagonal length of 8.3-inch. Similarly, each screen has 100% DCI-P3 coverage, a 90% adaptive refresh rate, and Gorilla Glass Victus protection. Since the inner edge of both displays is curved, a small portion of the screen is visible even when the hinge is closed. It allows users to peek at things like incoming calls, messages, notifications, and charging progress from the side.

The Surface Duo 2 also supports every generation of Surface Slim Pen, including the new Slim Pen 2 with haptic feedback. However, users will have to buy one separately. Anyway, even with the size and display upgrade, this device is lighter than its predecessor, starting at just 284 grams. Microsoft is also offering it on a new Obsidian color option besides the Glacier variant.

Running the show underneath is the Qualcomm Snapdragon 888 chipset. It’s quite an upgrade from the Snapdragon 855 on the previous generation Surface Duo. The new chipset also comes with an integrated 5G modem, while the phone supports a total of 18 5G bands.

Besides solid build quality, another important aspect of a folding phone is its software. Without robust software backing it up, dual-screen phones are just gimmicks.

Here, the Surface Duo 2 runs on Android 11. And Microsoft’s different tweaks, optimizations let users open two apps side by side. They can even make app pairs to launch two apps with a single click. 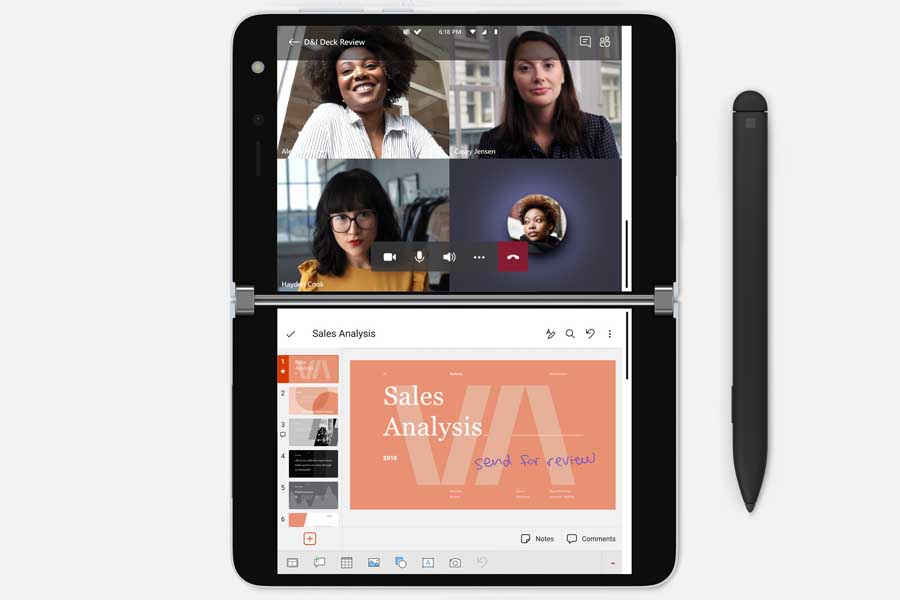 Microsoft claims there are over 150 games optimized to make use of the dual-screen. For instance, while playing games like Asphalt 9, you can expand the map on one screen while enjoying the gameplay on the other. Apart from Microsoft’s own suite of applications, apps like Disney+, TikTok, Kindle, ESPN, etc. have been optimized to make full use of Duo 2’s dual-display as well.

Microsoft has also overhauled the camera set up this time after all the criticism it faced for the poor camera capability of the original surface duo. Here, the Duo 2 features three cameras at the back and one on the front.

The triple rear camera setup consists of a 12MP primary camera with Optical Image Stabilization (OIS). Accompanying it is a 16MP ultrawide lens and a 12MP telephoto lens that boasts 2x optical zoom and OIS. Over on the front, there is a 12MP selfie camera, accompanied by a dual-LED flash.

Fueling the phone is a 4,449mAh dual-cell battery which supports 23W fast charging over the USB 3.2 Gen 2 Type-C port. There is no wireless charging support though. Microsoft Surface Duo 2 supports dual-band Wi-Fi 6, Bluetooth 5.1, and NFC. A fingerprint scanner is integrated onto the power button, and you get stereo speakers for audio output. 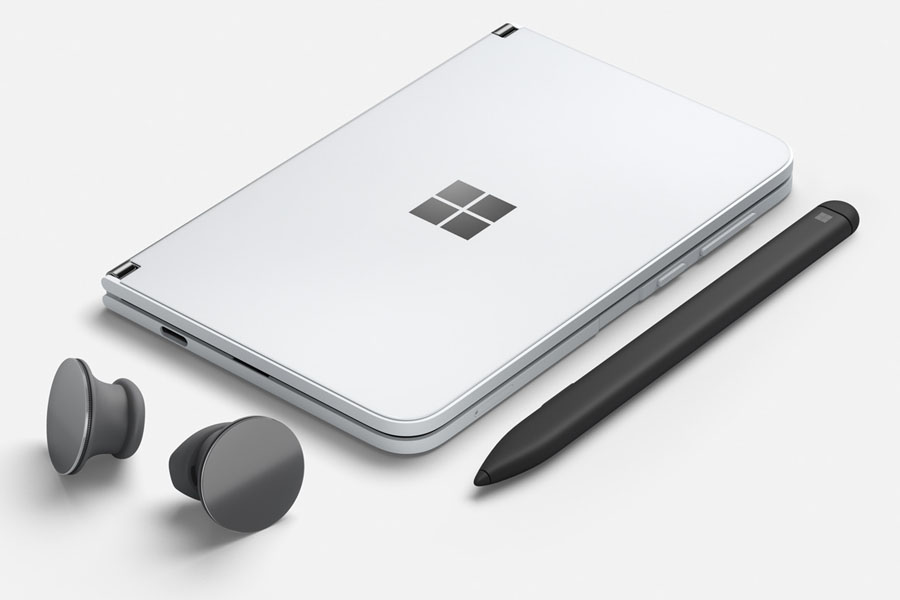