Engineers at MIT have developed what they call a “brain on a chip” that could change Neuromorphic Engineering forever. A paper published on Nature Technology states that they have been able to fit ten of thousands of memristors into a chip with the area as small as a millimeter-square. It’s a breakthrough that could lead us to powerful AI devices with supercomputers like prowess that can fit into our pockets.

At first, humans created machines to assign them physically demanding tasks. But that was never going to be enough. We now want computers to assist us in jobs that require cognitive thinking. It gave rise to the field of Neuromorphic Engineering (or Neuromorphic Computing). The field deals with machines with computing cores that mimics our nervous system. These systems are based on Artificial neurons that try to replicate the biological neurons that make up our nervous system. These neurons form an Artificial Neural Network and transmit information to each other via artificial synapses.

MIT’s new “Brain on a Chip”

Most of these artificial neural networks are based on software. But the engineers are trying to build a hardware-based neural network. If they are successful, these chips can have instant decision-making abilities without a working internet connection.

Standard chips, like that in our mobile and laptops, have thousands of transistors packed in confined silicon die. Each transistor can store discrete values in the form of 0 and 1. MIT’s Brain on a chip instead utilizes memristors that can save a wide range of values depending upon the strength of the signal that is fed to it. Thus, memristors can carry out more advanced calculations than traditional transistors. 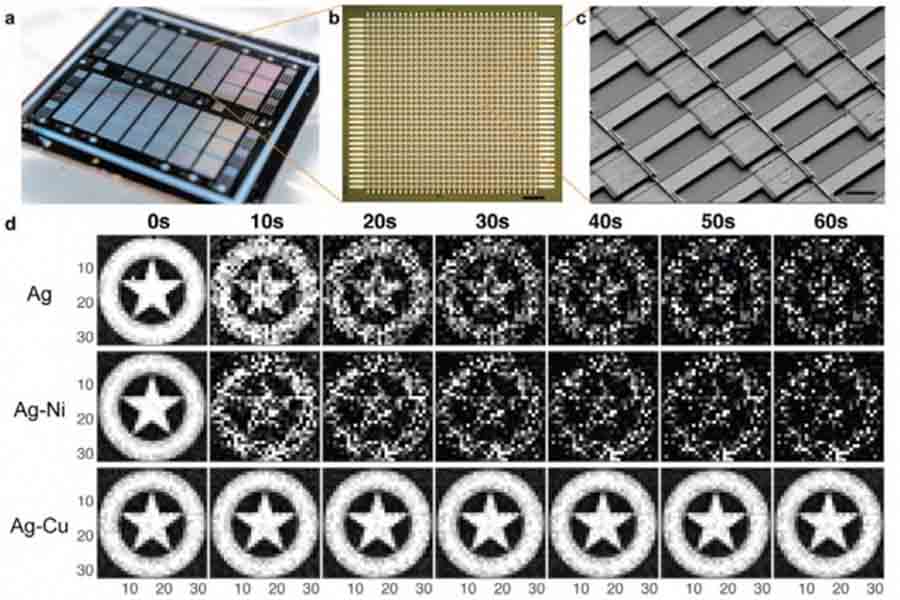 The problem? The performance of the memristor is compromised when it is implemented on a smaller chip. A typical memristor consists of two electrodes of opposite nature (silver and silicon respectively) with a channel between them. The channel allows the flow of ions from one to the other. On a smaller design, the channel is diminished, thus the flow of ions is affected. It causes the smaller memristor’s results to be less reliable than its bigger counterpart.

To allow the ions to flow in a smaller conduction channel, MIT engineers added a layer of copper to the negative electrode before covering it with a layer of silver.  It was then sandwiched along with a positive silicon electrode in a silicon die. This way, tens of thousands of memristors could fit in a millimeter square chip without compromising the performance.

In the initial test conducted, the new chip was able to remember Captain America’s shield and reproduce the exact same image several times. Each memristor was able to record and retain individual pixels of the image resulting in a crisp and clear image. The performance of the three different memristor designs in the image creation test is represented in the image above.

The chip is also capable of image processing tasks such as blurring and sharpening. The testers claim that the new Brain on a chip was able to outperform standard memristors based chip in each of the tests.

Though the results are exciting, the researchers still need to refine the product to make it commercial. The next task will be to develop it for complex image recognition tasks. Jeehwan Kim, an associate professor of mechanical engineering at MIT, has stated that the ultimate goal of the research is to develop a chip capable of complex AI operations without the need for supercomputers, the internet, or the cloud.