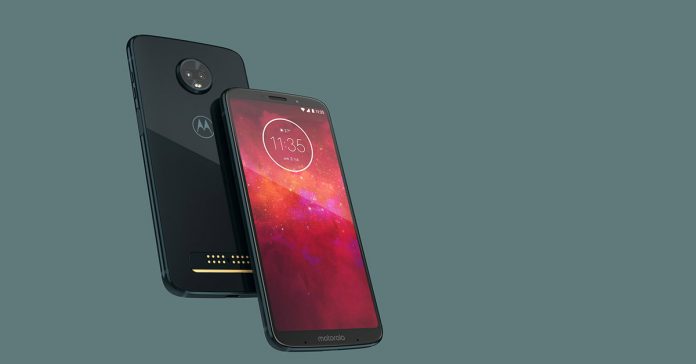 The Moto Z3 Play comes with a 6.01-inch Super AMOLED display with full HD+ resolution that speaks 2018 with the minimal bezels on the top and bottom. This display has an aspect ratio of 18:9 and a 402 ppi density. For protection, Motorola has covered the display with Corning Gorilla Glass 3. Inside lies an octa-core Qualcomm Snapdragon 636 processor with 1.8 GHz of clock speed. For the graphical purpose, there is the Adreno 509 alongside it. We have seen Xiaomi use the same processor on the Xiaomi Redmi Note 5 AI which is already available in Nepal. This processor is supported by 4 GB of RAM. However, the storage option Motorola has included on the Z3 Play is quite strange, as the $500 smartphone features 32 and 64 GB of onboard memory. There is, however, an option to expand it via a microSD card slot. As for the operating system, the Moto Z3 Play runs on a near stock Android 8.1 (Oreo). On the optics side, the Moto Z3 Play is equipped with a 12- and 5-megapixel rear-facing cameras. The 12MP camera has f/1.7 aperture and has dual pixel phase detection autofocus enabled. This camera is supported by a dual-tone dual-LED flash system. In front lies an 8-megapixel selfie shooter with f/2.0 aperture which is capable of shooting 1080p videos.

The Moto Z3 Play houses a 3,000 mAh battery which is fast charging enabled. If a user wishes to increase the battery life, they can, of course, the Moto Mod meant for increasing the battery life. This battery is chargeable via a USB Type C connector.

With the $499 price tag, Moto Z3 Play has entered the OnePlus territory as the company has priced its new phone, the OnePlus 6 at $529. It will be interesting to see how the Z3 Play holds up against the so-called flagship killer.