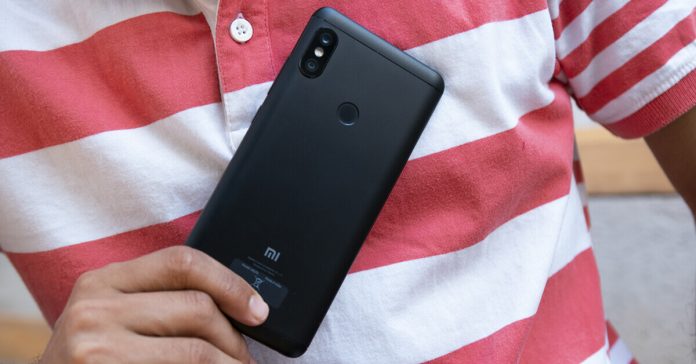 The Redmi Note 5 AI comes with the Qualcomm Snapdragon 636 that employs eight Kryo 260 cores at 4*1.8GHz and 4*1.6GHz. This, again, according to Xiaomi has 50% more performance, 40% more power efficient, and also delivers a sustained performance. The graphics department is handled by Adreno 509 GPU. It also comes with up to 6GB of LPDDR4X RAM which is the fastest RAM available on the market.

The display is a familiar 5.99″ 18:9 FHD+ display with minimum bezels. The back is also covered by a tapered back and a vertically aligned dual back cameras. The dual cameras Xiaomi employed is a 5MP Samsung sensor paired with a 12MP Sony IMX 486 sensor.

The front is equipped with the 13MP, f/2.0 camera capable of taking portrait selfies. The front also has a 4500k color temperature LED selfie light as well. The camera sample demos that Xiaomi showed in their presentation were pretty awesome. They weren’t shy at all, especially comparing the front camera with the likes of iPhone X and Google Pixel 2. Xiaomi claims the camera is AI based, which is one of the main reasons why their new camera is so good.

Coming back to that Kryo based processor, it is hands down one of the fastest processors in this price segment. Xiaomi quoted an Antutu score of a staggering 109,692. This makes it one of the best price to performance phones out there. The processor also delivers a pretty good battery life thanks to the 14nm manufacturing process.

The smartphone also features the same tapered back cover as the Redmi Note 5. There are a few other features like Beautify 4.0 which is an intelligent software that improves your selfie. And finally, the face unlock feature, which will arrive through an OTA in March. Let me clear your doubts first, Redmi Note 5 Pro is the Indian variant and the Redmi Note 5 AI is the Chinese Variant. Most of the specs on both the variants are same. However, one can notice a difference in the camera section.

The Indian Variant or the Redmi Note 5 Pro comes with a 20MP front camera that enjoys a f/2.2 aperture and a pixel size of 1µm. The Chinese variant, on the other hand, is low on the megapixel count as compared to the Indian variant. The Redmi Note 5 AI is gifted with a 13MP camera, f/2.0 aperture, and a pixel size of 1.12µm. So when looked at the numbers, the Redmi Note 5 Pro may seem better of the two. However, with f/2.0 aperture, the Note 5 AI performs better at low lights. Similarly, because of the larger pixel size, the AI variant carries sharper details of the subject in the images.

Similarly, at the back, both the variants are provided with a dual camera setup containing 12MP and 5MP cameras. The AI variant possesses 12 MP primary camera with f/1.9 aperture and a pixel size of 1.4µm whereas the Note 5 Pro 12MP camera possesses a slightly narrow aperture (f/2.2) and slightly smaller pixels (1.25µm). So the primary camera on the Note 5 AI captures sharp details with a remarkable performance even in a dark environment.

Furthermore, the 5MP secondary camera also comes with richer attributes in the Chinese variant (f/2.0 aperture, 1.25µm pixel size) over the Indian variant (f/2.0, 1.12µm). So the secondary camera on the Note 5 AI is reasonably a better performer and capable of gathering the depth information with high accuracy as compared to the Redmi Note 5 pro.

Since the day of the global launch of the smartphone, a number of people in Nepal were quite interested in the product. And there a number of messages sent on our Facebook and Instagram sent by our followers asking about the launch of the phone. There were already a lot of rumors flying around in the market regarding its launch in Nepal. And now, Vatsal Impex finally launched the smartphone in Nepal. If you are interested to own the device, you can simply pre-book it from their official website of the Xiaomi Nepal. You can get the device directly from Daraz as well.

Vatsal Impex has priced the 4GB version of the Redmi Note 5 AI at Rs. 28,499. We have seen a lot of times, Vatsal Impex tagging the Xiaomi products with an exorbitant price tag. And that attitude has changed when Teletalk was appointed as another official distributor and when it started selling Xiaomi phones at relatively cheaper prices.

Also Read: Who should be the sole distributor of Xiaomi products in Nepal?

So what are your thoughts regarding the Xiaomi Redmi Note 5 AI? Are you going to own one? Let us know in the comments.