Motorola is not the one to get spotlights frequently, but when it does, it does become exciting news. Motorola is known for manufacturing a durable phone that provides a good value for your money. And with a similar vision, Motorola unveiled a new phone. The Motorola Moto P30 is official!

However, there are certain uninteresting aspects to it. For instance, the Moto P30 comes in a very familiar design. We cannot blame smartphones these days for sporting all the same looks. But, the P30 comes with an iPhone X like notch and camera setup, while its color will remind you of some Huawei phones. It comes in three different colors: Ice White, Bright Black and what Motorola calls Aurora Blue, Huawei calls it Iris Purple! And Lenovo states that this phone has been “made for China“, for now, but we certainly hope to see it in other markets.

Meanwhile, the Motorola Moto P30 features a 6.2″ IPS LCD display with Full HD+ resolution. The bezels are tiny, but it has a notch, that resembles the iPhone X uncannily. Even the dual camera set up at the back reminds you of that. It has a fingerprint sensor at the back, which doubles as the Motorola logo at the back. Clever use of space, right? The Moto P30 retains the headphone jack, which is nice, and has two speaker grills. So, the sound must be great! 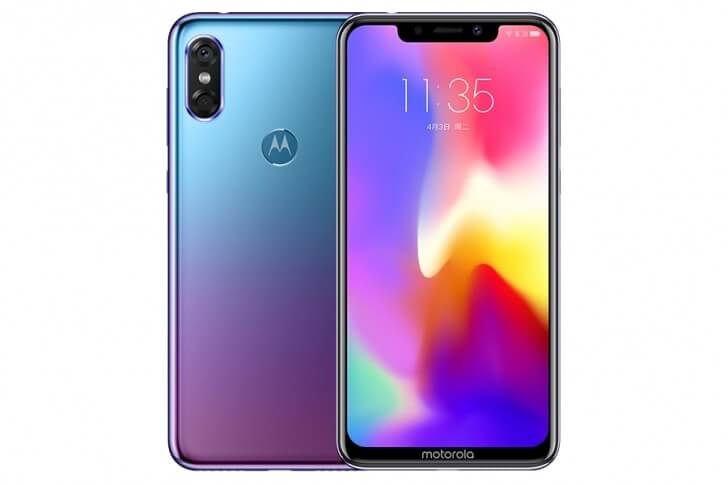 The dual camera setup is a combination of 16 MP sensor with f/1.8 aperture and a 5 MP sensor with f/2.2 aperture. It supports 1080p video recording with background blur and certain other effects while the front camera is a 12 MP lens with f/2.0 aperture.

Under the hood, an octa-core Snapdragon 636 powers the phone with 6 GB of RAM. It sports 3000 mAh battery, that also comes with Fast Charging support. There are 2 variants in terms of storage options: a 64 GB model and a 128 GB model. But there is a microSD card slot for the expandable option.

Motorola used to be known for providing a close to stock Android experience, but the Motorola Moto P30 runs on Lenovo’s ZUI 4.0 on top of Android 8.0 Oreo. That certainly comes as a bit of disappointment. But the Moto P30 will also receive Android Pie update later this year! Anyways, for now, the phone is only available in China. The Chinese Yuan price roughly converts to $289 for 64 GB model or $303 for the 128 GB one. We might see some price changes if it makes it to international markets.

For the price, it certainly is a good mid-range device. If it comes to Nepal, would you consider buying it? Share your thoughts.