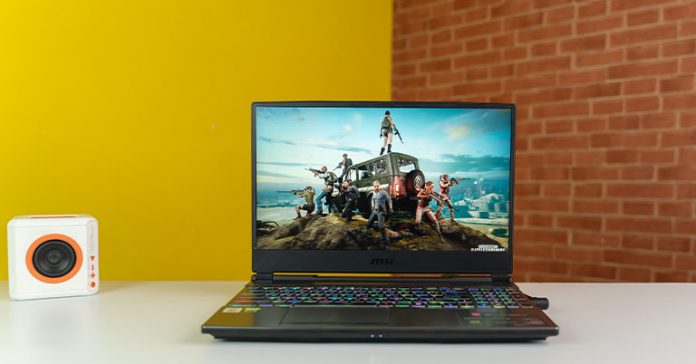 Last time I had reviewed the Acer Predator Triton 500. And I was pretty impressed by that. This time around, I have the MSI GP65 Leopard 10SFK. This too falls in a similar category. As a matter of fact, both share most of the specifications. Now, as I said, the Triton 500 was impressive, but what about this one? So, without any delay let’s get into our review of the MSI GP65 Leopard 10SFK and see where it ranks among its competitors. 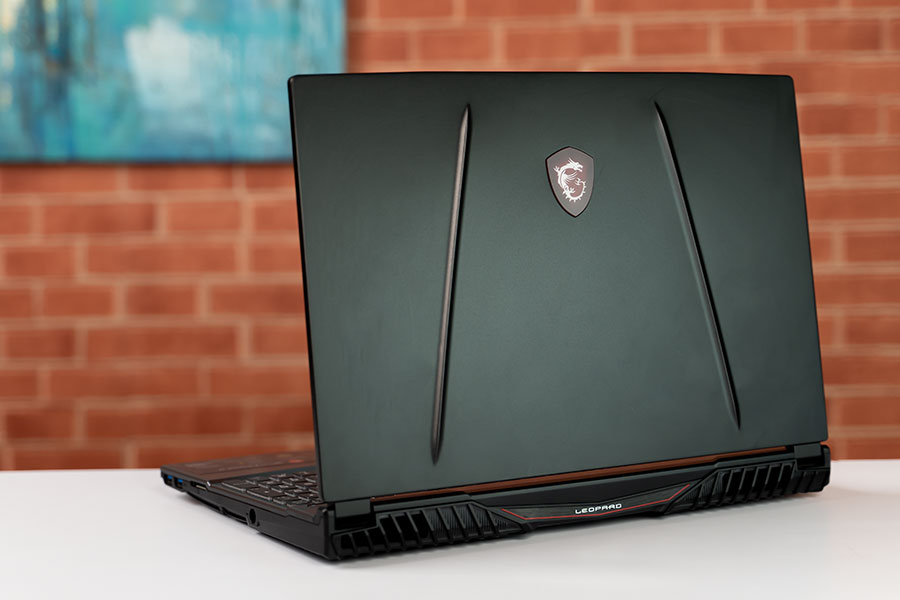 Anyway, getting back to the designs, you find that it’s pretty much similar to that of the 2019 model. It has got an aluminum lid that sports raised lines with an MSI logo in the middle. The design is not spectacular per se, but hey it’s classic MSI. And I’ve got no problem with that.

The lid catches fingerprint smudge quite often, so be careful with that. The MSI logo in the middle gets lit up by the backlight of the screen, so no customization options for it. The rear contains air exhaust fans on the left and the right side with the leopard text in the middle. Similarly, the front has a few led status lights.

The sides contain a good spread of I/O’s and air exhaust vents. On the left you get a Kensington lock slot, RJ45, HDMI 2.0, mini DisplayPort 1.2, USB 3.2 Gen 1 Type-A port, USB3.2 Gen 2 Type-C port Sadly, it is not a Thunderbolt 3 port. I’ve felt that the lack of Thunderbolt 3 in a gaming laptop is a concern for many. And with the competition high in this segment, I don’t know how much the exclusion of Thunderbolt 3 might come back to bite MSI. Other than that there’s a 3.5mm headphone and a microphone jack on the right side.

On the left, you get 2 x USB 3.2 Gen 1 Type-A port, SD card reader, and power input. I always prefer fewer wires on the left-hand side, and this laptop provides me just that. Underneath, there are air intake vents right above the intake fans.

Now, the inside in contrast to the lid is made up of plastic rather than metal. Seems cheap but trust me the build quality is great. And the fingerprints don’t show up in on the silver finish. Neither the keyboard nor the palm rest flexed when applied pressure. However, the lid, despite being a metal build has got quite a flex to it. But it’s not that much of a concern. So, you probably won’t have to worry about it too much. 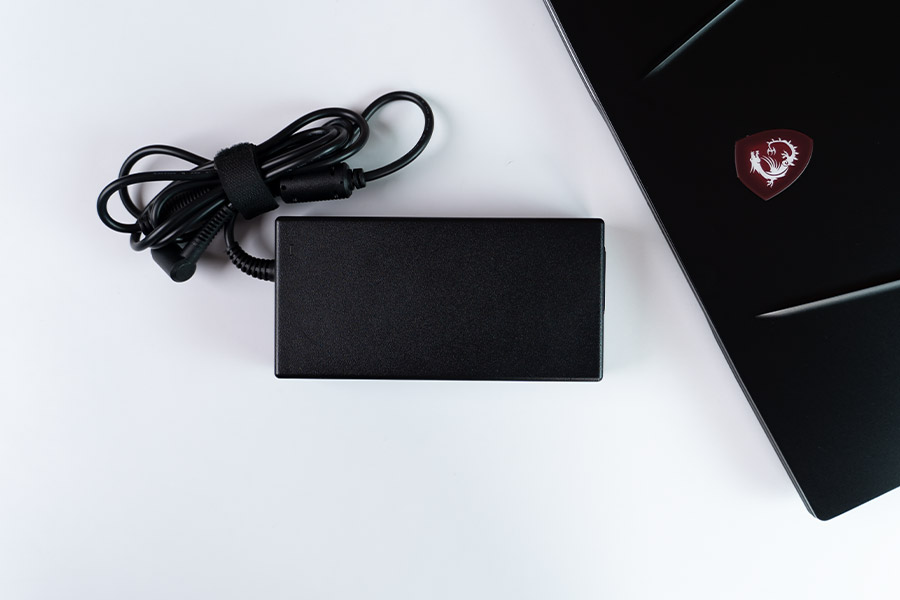 The laptop falls on the heavier side of the gaming laptop spectrum. It weighs around 2.3 kilos, add the weight of a hug charging brick on top and you get is a daily calorie burner. So, that’s something you should consider before buying this laptop. You really wouldn’t want to give your back a problem over a laptop.

On the whole, however, despite being a heavy laptop with an outdated design, the device is undoubtedly a robust piece that you can rely upon 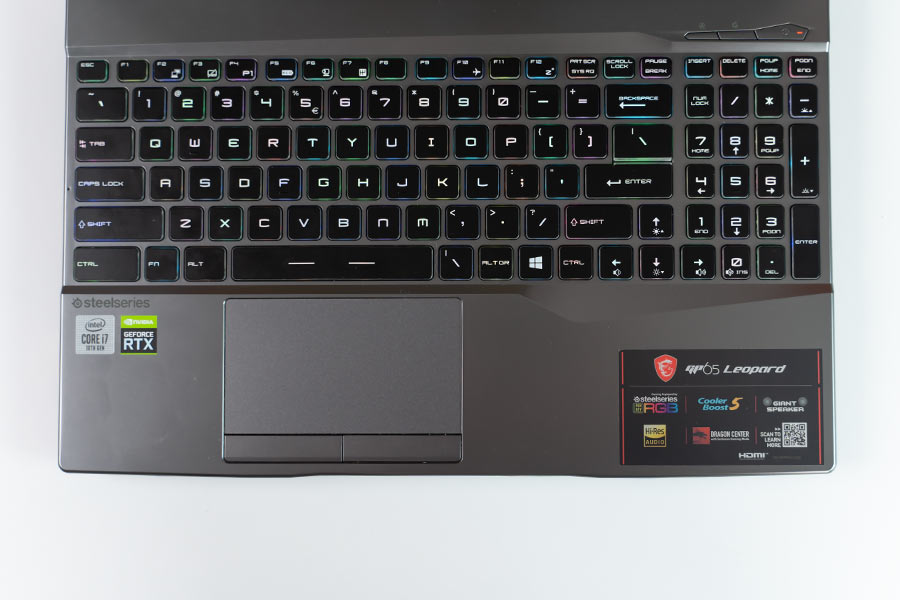 It has a full-sized keyboard by SteelSeries. MSI ships in laptops with great keyboards and this one is no different. It has got great key travel, the keys are tactile, and typing, in general, has been great. There are a couple of hotkeys alongside the power button right above the Numpad. One of those keys will help you cycle through the awesome RGB animations and the other one boosts up the fan speed to the maximum. And that’s always handy, right?

The keys have per-key RGB lighting and it can be customized through the SteelSeries engine app. The four levels of key brightness can be controlled through the app itself or you can use the function key and the shortcuts on the Numpad too. Another thing that I quite liked about the keyboard is that once you press the function key, only the shortcut keys remain lit up and it is really helpful. 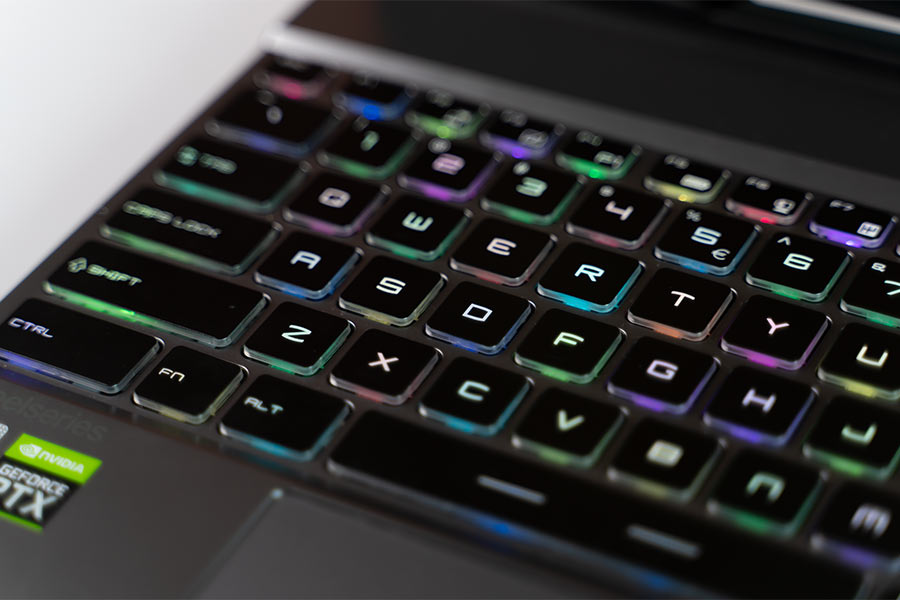 The plastic trackpad is a tad bit more on the left-hand side than what I would have preferred. It might get in the way while you are playing games. However, the trackpad itself is superb. It comes with windows precision meaning you get a smooth experience and virtually no issue at all. However, it is not a clickpad and you have actual buttons. It boils down to personal preference in these sorts of things and because my laptop has got a buttoned trackpad, I don’t really have any problem with it.

The laptop ships in with the MSI Dragon Center, from which you can control your system. You swap between the user profiles, customize fan speed, battery master, and so on. The battery master feature is pretty handy. It helps you customize the charging options based upon your habits to prolong the battery life.

Under the user profiles, you can switch between extreme performance mode, balanced mode, silent mode, super battery, and a customized user mode. Under the customized mode, you can set the performance to Turbo, high medium, and low. Similarly, the fan speeds can be manually adjusted or set to either Auto, Advance, or Cooler Boost. You can toggle between them from this same app depending upon the task you are doing.

So, great features and all in the Dragon Center, but the app itself is quite buggy. First off, I had to install the app twice just to get it started, and even then, some of the features kept disappearing occasionally. For instance, it only shows the system info and ambient link and nothing else. You’ll have to restart the system to get it working properly. Also, it’s quite astonishing that the control center does not give you the option to customize the keyboard lightings. So, my user experience with the in-house Dragon Center app was not that great. 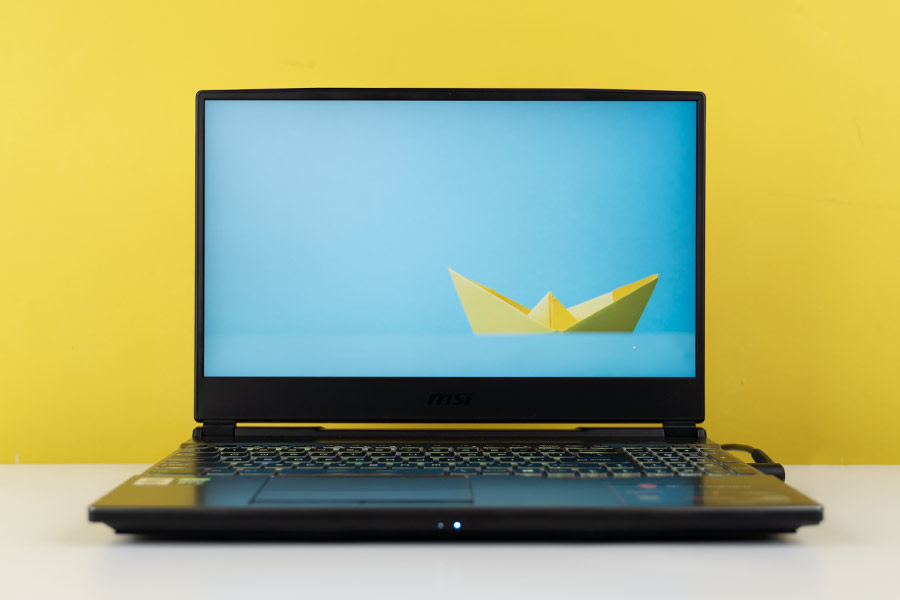 The GP65 comes with a 15.6” 1080p 144Hz non-touch matte IPS display. It is a panel from LG and its display beats that of the Triton 500. The display looks sharp, the contrast is great and you’ll notice vibrant colors in whatever you are viewing.

It covers the full sRGB color gamut, about 76% Adobe RGB, 77% DCI-P3, and the brightness peaks out at about 410nits. The panel is good for your everyday content viewing, and gaming is a treat for the eyes and you won’t notice any tearing at all. The brightness especially is great, and you should have no problem at all while using it outdoors.

The color coverage is good for content creation too. 100%sRGB means that your digital content will be pretty color accurate and 76% Adobe RGB somewhat suffices for print media. However, if you are much more serious about your content you’d want to look elsewhere.

There seemed to be a bit of a backlight bleeding while viewing dark contents, however, it was very very minimal. And I would be nitpicking if I were to dismiss this display over this topic.

Let’s move on to performance and hardware. My review unit packs in the 10th Gen Intel i7-10875H CPU. It is based on the comet lake architecture and clocks between 2.3-5.1GHz. This 45W CPU delivers almost 15% improvement over the 9th Gen that was used in last year’s model.

It is thankfully it coupled with the Nvidia RTX 2070 GPU. I really liked that it has the standard one and not the under-powered Max-Q version. Generally, laptops in this segment go for the latter and it does affect the performance of the device to some extent. This standard RTX 2070 very efficient and will help you achieve high fps in most of the games. More on this a bit later.

Other hardware specs include 16GB DDR4-266MHz dual-channel RAM. And that’s a bit unfortunate as this is a bit slower and maybe they could have gone with the 2933MHz that the 10th Gen CPU supports. There are two RAM slots inside, meaning you can easily upgrade it to up to 64GB. Storage-wise it has a 512GB M.2 NVME SSD and 1TB HDD.

You can always upgrade the internals yourself, and it’s quite easy. Simply open the bottom and bam you have easy access to the internals. Under the hood, you’ll be able to see the heat pipes, the chunky 6-Cell 51Whr battery. While we are on the topic of battery, let me just say that this aspect of the device is quite underwhelming.

Talking about games, it’s simply a joy to play in this rig. AAA titles easily hit high fps on medium to low settings and even in high settings, the games have minimal lags. That means, for less demanding games, the laptop works like a breeze. On Battlefield V, I managed around 108-110 fps on ultra-settings. Now, comparing that with the Triton 500’s, there’s not much difference here. However, the GP65 Leopard holds its own even with Ray Tracing on. With DXR on and in ultra-settings, I managed around 65fps. And on Triton 500, it was around the lower 50’s. So, there’s a big difference here.

Stats of other games are somewhat similar with the GP65 pipping the Triton by a few margins. However, if you still want some extra fps on games, you can do so by upgrading the system to DDR4-2933 memory.

If it can handle AAA titles without much issue, everyday tasks should be a breeze. And that’s exactly it. 186cb single core on Cinebench R15 shows that the system is very much capable. Thus, no worries in regards to the performance. However, the upper part heats up on sort of normal usage after an hour or so. I had opened 20 tabs on Google Chrome and a couple of word files, and after about 1 hour 20 minutes, the space above the keyboard started heating. Nothing uncomfortable, yet noticeable. Furthermore, the fan noise was obtrusive too. So, maybe it’s a good idea to toggle the cooler boost every once in a while. Though let me remind you, the cooler boost will drown MSI’s “giant speakers”.

In balanced mode, I got about one hour and ten minutes while doing normal stuff such as web browsing and so. Switch to the extreme performance mode and the battery backup time decreases. You can opt to tweak around the user profiles a bit, but it really does not help that much.

Underneath the hood, you’ll also find the two 2W speakers. Now, MSI advertises it as “Giant Speakers”, but all I can say is that the simply decent. A bit louder than other gaming laptops but lacks bass. You can customize the audio options from the Nahimic audio software. So, nothing spectacular. Furthermore, the fan noise will easily drown the speaker. And thus, you’ll need a good pair of headphones while playing games.

Heating, for the most part, is not an issue either. The fan noise will bug you a lot though. I played the games in extreme mode with a cooler boost on for the best result. And it handled the thermals pretty well. After a while though, the area above the keyboard deck and the central part of the keyboard do heat up. However, the WASD keys are relatively cooler. Warm but not exactly uncomfortable. And the palm rest remains cool too. On longer gaming sessions, the heating of WASD keys might become an issue though.

Perfect for both gaming and daily use. That pretty much sums up the GP65 Leopard. With 10th Gen Intel Core i7 processor and RTX 2070 graphics, this laptop can handle anything you throw at it with ease.

However, having said that, the battery life is not up to par, and the speakers are just above average. Some may even feel that the design of this laptop is a bit outdated. Furthermore, this laptop will be a difficult one to carry around.

Issues aside, this is one of the best performing laptops in this price segment. If you are looking for a performance master, then this one would be a good choice. But, if portability is what you are after, then you’ll probably want to look elsewhere.