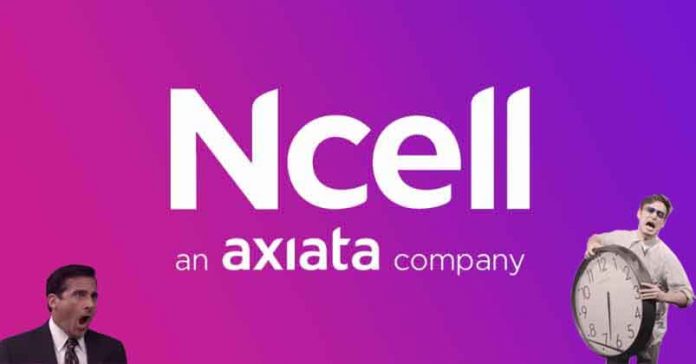 There’s a popular Nepali proverb that goes “हावा नचलि पात हल्लिदैन”. It roughly translates to how nothing happens without a reason. And that’s right, right? I mean, people don’t protest just because, Thanos didn’t snap half the existence void of a rationale, and Ncell doesn’t get its bad rep without a reason either. Even if I don’t (& can’t) repeat the obscenities the company is referred to in verbatim, you probably know Ncell by a lot of other nicknames. Here, I’ll be discussing how Ncell exploits its userbase through automatic activation and renewal of different services.

And if you don’t… hey, good for you! From tax-duping to shamelessly exploiting the helpless and at most times unsuspecting customers by activating & renewing services seemingly at random, Nepal’s second-largest telecom provider has gained quite the name for itself. Though the chapter of “Ncell stalling the government with paying its due tax” has recently been closed, the latter still remains a dreadful problem to this day.

If you’re a Ncell subscriber, chances are you’ve noticed how your balance gets inexplicably reduced. Like, you can almost guarantee it’s not supposed to be this low but somehow it is. Yet, if you haven’t been a victim of such an incident, once again, good for you! Since I’m betting the vast majority of us don’t keep tabs on their mobile balances unlike other expenses, you thus find it difficult to validate the evident abnormality on your mobile subscription. What do you do next? 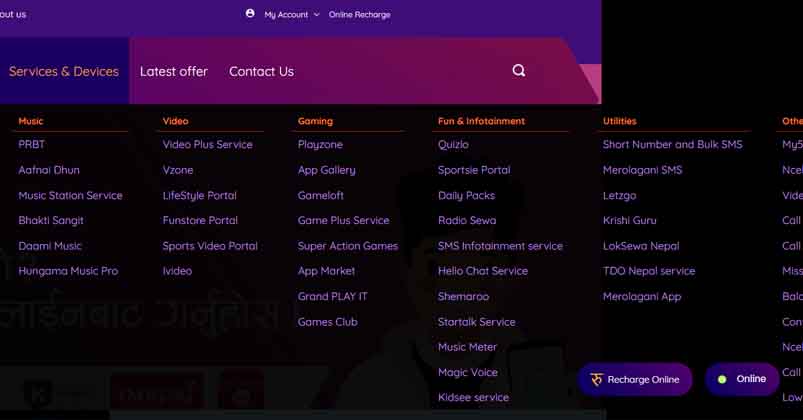 A dedicated person would contact the Ncell customer care number and try to sort things out. Turns out, you were subscribed to some weird, unheard of service that you’ve never used and had no memory of activating. Well… guess why you don’t remember it? That’s because our very own friendly neighborhood Ncell does it for you without any prior confirmation from the customer’s end.

And if that’s not taking good care of your clientele, I don’t know what is.

The company is so driven towards simplifying your everyday life, that it would go out of its way to provide facilities that you weren’t even aware you wanted – without your awareness. Wow, now that’s some level of commitment I cannot fathom. So, I did the unthinkable.

Yes, ladies and gentlemen: I read Ncell’s terms and conditions (T&C). But that was silly of me ‘cause obviously, they won’t indicate or even slightly imply that the company reserves the right to straight-up scam their subscribers out of money.

All their fancy legal resources have made sure of that. Now, I’m no lawyer or anything so I couldn’t figure out any loopholes in the T&C which would allow Ncell to initiate services, short of the customer’s agreement. However, I’m confident that all this shady practice is somehow in an intricately complicated way, legal. 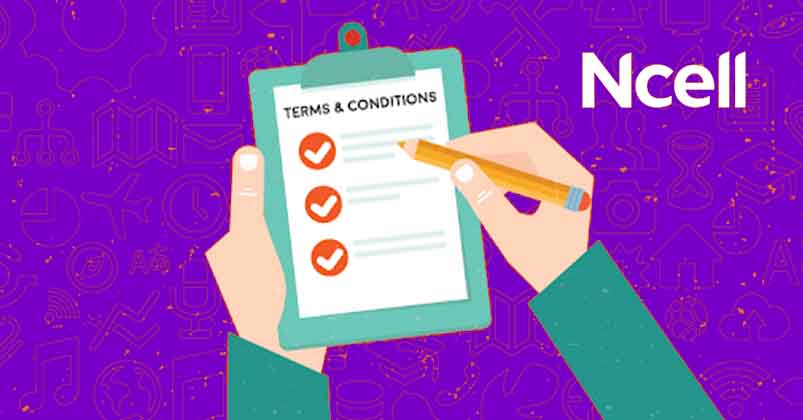 Also, while every other fillable or informative section of the subscription form has both Nepali and English translation, the T&C is written entirely in the Nepali language. Combine the fact that almost no one reads it and that its strictly professional composition is honestly hard to get for the majority of its audience, you get a bigger net to trap the helpless. Some would argue that the customer’s inability to understand it is entirely their fault; and they’d be right. However, it could also easily be a technique called “technostrategic discourse”, which is a way to discourage debates through the use of specialized language unfamiliar to the non-professionals.

More importantly, what’s the point of reading the T&C if you can’t negotiate the terms, but need the service anyway?

Push Marketing at its worst!

Moving on, Ncell has a lot of services under its belt and frankly, some of them are pretty darn useful or plain fun to have. For instance, “Ncell Saapati”, “Balance Transfer”, “PRBT”, etc. are the most useful of the bunch, and also probably the most subscribed-to services. But a large number of them are quite expensively redundant – and these are exactly the kinds of facilities Ncell seems to force upon its customers under the company’s inexcusably aggressive push marketing campaign.

Allow me to list out some of the said subscription-based services I’ve personally witnessed my family, friends, neighbors, colleagues, or some strangers on the internet have been a victim of.

Yeah, none of them sound appealing at all, do they? Regardless, from what I’ve seen, many such victims were subscribed to the App Gallery. This service was formerly known as Huawei AppGallery but has since undergone a name change. In case you don’t know, AppGallery is Huawei’s answer to Google Play Store for app distribution since it was barred from using any technology from US-owned companies – including Google. You can learn more about the whole ordeal by clicking here.

Checking out the quality of such services

I checked out a few of them, and boy are they terrible! Both Games Club and App Gallery are similar; with a working principle of “Netflix for mobile games”. There are some games you can download for free, while some cost up to Rs. 200! On top of this, some of the games here are a rip-off of the ones available for free on Play Store. Wow! If this is some way to promote Huawei AppGallery, it’s terrible. I can’t help but think this dubious inefficacy is what lead to changing the name of the service in the first place. 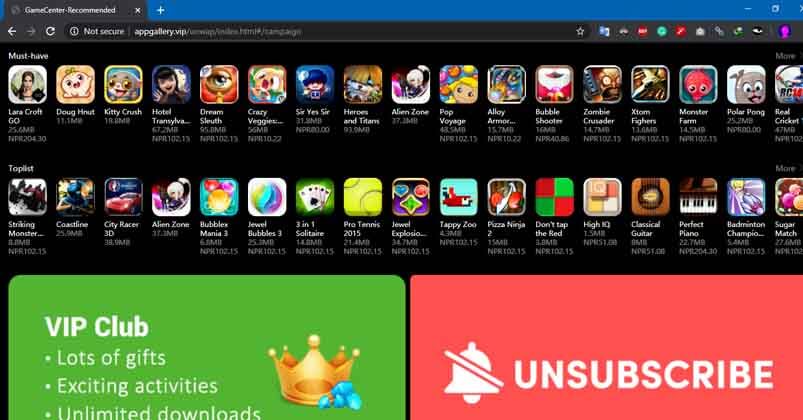 But let me reiterate, the problem here isn’t that the service itself is terrible with an unrewarding and disappointing selection of features available in them. Rather, it is still the automatic activation and renewal of services from Ncell, without the customer’s knowledge.

Unfortunately, my mother was also one of the people victimized by such a scheme. She uses an old-school Symbian phone (Samsung GT-S5233S) and doesn’t even know how to use it properly. All she does is pick up or make calls through the speed dial. One day, she complained about how the automatic voice operator replied with a balance-low message; when I had just topped-up the balance a couple of days back. It was weird and I called the customer care number “9005”. Disappointingly, I was informed that she was subscribed to Huawei AppGallery VIP service. Huh?

I complained that it’s not possible and the operator argued that she could’ve “accidentally” activated it from those pop-up messages you get when you hang up on calls or make a balance inquiry. Then I asked for ways to deactivate the service and that’s the end of it. However, I’ve been monitoring the phone every now and then to check if the message pops-up again. But it has been a no-show. Additionally, there was no message regarding the activation of the service either. You can easily make of that what you will.

In some cases, Ncell has justified the service-activation saying the user may have clicked an ad for it on the web. I mean, should it be that simple to trigger a monetary transaction? Shouldn’t there be a few more steps, like confirmation and validation? What’s even more infuriating is that in many users’ cases, the service de-activation doesn’t even work easily. Take these samples for instance. 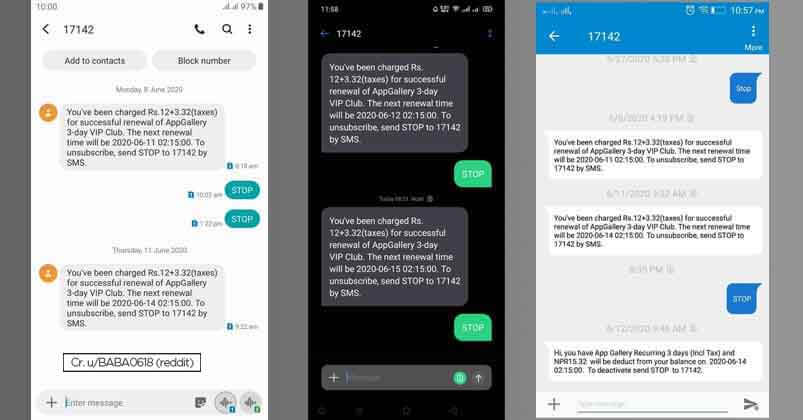 The subscriber is following the guideline specified by Ncell to de-activate them, but it doesn’t work. Seems like an angry verbal complaint is the only way to be rid of this mischievous act. And there are 3 categories of people who handle this situation:

Let’s wrap things up now. What Ncell is doing is straight-up unethical and though I don’t have any legal expertise, this thing certainly feels illegal. Profiting off of helpless customers by charging them for services through automatic activation and renewal shouldn’t be a thing, Ncell. Sadly, this has been going on for a long time; which also goes to reflect the state of consumer rights protection in Nepal. As a result, Ncell can’t even substantiate it as a programming error in the system.

As an individual subscriber to the company, all we can do is resolve it on our end and go separate ways. However, our collective efforts can definitely put pressure on this multi-billion-dollar corporation to make a substantial effort; making sure that this kind of illegitimate corporate swindling doesn’t happen again.

Here’s how you can replace your iPhone for the price of...