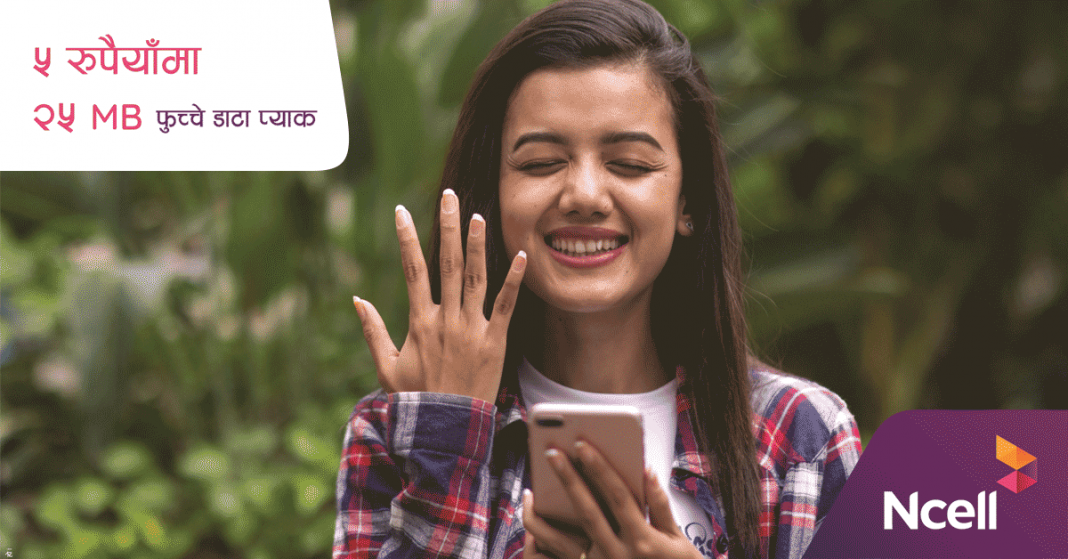 How much are you willing to pay for your data? The cost of the mobile internet seems to be getting cheaper, with its demand growing. Sure, there is additional taxes and everything as of recently, but compare mobile internet prices of today to that of a year ago. Or maybe even a month ago. You’ll know. And then, there came the Ncell Fuchhe Pack.

And Ncell, the largest player in the telecommunication sector in Nepal made another splash with its latest data pack offer. It’s new “Fuchhe Pack” gives its customers 25 MB of data for a mere amount of Rs.5! That excludes taxes, but even with it, you get that much of data for Rs.6.38. That’s 26 paisa per MB! You can subscribe for the offer for all 2G, 3G or 4G as well. Of course, the data pack is only usable in the daytime from 5 a.m. to 5 p.m. and it’s valid only for 24 hours. So, you can only use the package for once a day…unless you use it up and subscribe to it again within that time frame.

That makes the offer a kind of “not for everyone”, but the way we see it, it’s the best offer for travelers, particularly those who like to upload every little thing on their Instagram or Facebook! If you’re on the road and need to get on the internet, this is as cheap as it can get. Ncell probably made this move as it saw that after the recently added taxes, data usage would go down significantly. Leave it no Ncell to come up with such strategies!

While Ncell does have many other offers for its data packs, this one takes the cake. While NTC also has many such offers, none can compare to this one. Smart Cell, another new player in Nepal offers its 4G data at 39 paisa per MB (exclusive of taxes) and it has many other offers, but you need to subscribe larger volumes of data for that. And while that’s cheap too, it still cannot beat the “Fuchhe Pack”. And so far, no such data packs exist anywhere else, as per our knowledge.

How to Register to Ncell Fuchhe Pack?

You can subscribe to the fuchhe pack simply by typing 5 and sending SMS to 17123. The pack will remain in place for 90 days.

So, has Ncell really taken a leap with this one? Will it make them more popular? Do you think this data pack offer will be useful to you? Let us know your thoughts about it.