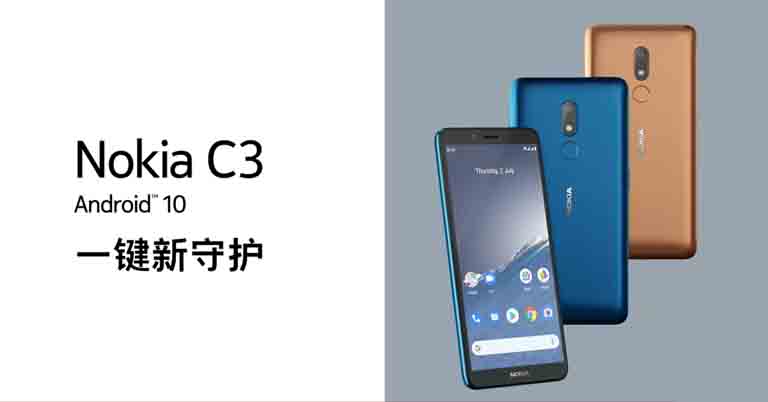 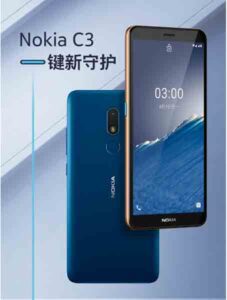 Since there hasn’t been a significant between the announcement of these successive devices, the design has remained the same in the C-series. The new C3 looks a lot like its predecessor. The polycarbonate body sports the pill-shaped module on the exact same spot. However, this time around Nokia has included a capacitive fingerprint scanner right below it.

The device comes with a 5.99-inch IPS LCD screen, which is slightly bigger compared to the C2. However, the 1440 x 720 pixels resolution has remained the same. The top bezel encloses the front camera. This time around, Nokia has removed the branding from the top and pasted it on the bottom chin. 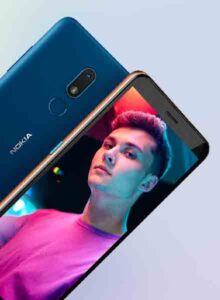 Nokia C3 is powered by an unspecified Unisoc chipset with eight cores. It comes with a higher clock speed (@1.6 GHz) compared to the one on C2 (1.4 GHz). RAM has been upgraded to 2GB and so is the internal storage, which is bumped to 16GB. Users can expand it further up to 128GB using a microSD card.

The 8MP rear camera on the back is included inside a pill-shaped camera module, along with an LED flash. On the front, there is a 5MP camera for selfies.

Nokia C3 is now available in Nepal for a price of Rs. 12,499. It goes on sale starting 15th of Sept from retail shops all over Nepal.