Home OnePlus OnePlus 8 Pro finally up for pre-order in Nepal; Coming on 11th... OnePlus has made a lot of visual changes one the 8 Pro compared to its predecessors. First off, the company itself went through a “logo overhaul”, which is just… why? But that’s old news and we’re not here to talk about that. Anyhoo, though it’s got the same curved glass back design with a matte finish, the OnePlus 8 Pro finally supports wireless charging, and an IP rating – two features that have been requested probably ever since the company went mainstream.

And it doesn’t compromise either. The OnePlus Warp Charge 30 Wireless isn’t the fastest out in the market with its 30W charging speed but is undoubtedly a welcome one. On the other hand, the IP68 certification takes away your fear against taking out the phone amidst the presence of dust, dirt, and water.

The rear cameras are also arranged a little differently, mainly because of an additional lens. OnePlus had spoiled its consumer base with an obstruction-free bezel-less AMOLED screen on last year’s 7 & 7T Pro but weirdly enough, the company has opted for a punch-hole cutout this time. I don’t understand this decision; are the days of motorized pop-up cameras this shortlived? It doesn’t seem like a durability issue since OnePlus itself proved it otherwise, and with immense pride. Seeing this change reminds of something Pewds said: “it is evolving, just backward.” Some new color options are also in store this time around. There’s the “Ultramarine Blue” which gets closer to dark indigo than blue, to be honest. Additionally, you also have the “Onyx Black” option. Also making its “shade”y debut is green, in what OnePlus is calling “Glacial Green”, which is my favorite among the bunch.

Getting to the display itself, it looks like the company is gunning for the top spot. The OnePlus 8 Pro has a tall, gorgeous 6.78-inches Fluid AMOLED QHD+ panel with a fluid 120Hz refresh rate and 240Hz touch sampling rate, with HDR10+ support. And unlike Samsung’s S20 series with a similar fluidity, you can enjoy the smoothness even at the highest of resolutions. In fact, the OnePlus 8 series also managed to secure A+ grade from DisplayMate, and consequently the title of “Best Smartphone Display”. Sadly, there is no middle ground to settle it to; in other words, you can only select between 60 and 120Hz option in the settings.

But what doesn’t sit right with me is its excessive curvature. Every beautiful flower need not have a thorn! Maybe some people like it and I know it’s been pretty much established as a “must-have” trait in a flagship device, yet I firmly believe it shouldn’t. Sure it looks great but when you actually go about using it, you’ll see what I’m talking about. Well, enough of the complaints. Let’s talk about the 120Hz panel more. While OnePlus had arguably paved the path for a higher refresh rate display in smartphones with its 7 series in 2019, the company had to up its game somehow this year. And they’ve done exactly that. Who’s surprised? The 120Hz fluidity is something else, which I was fortunate enough to witness it on Samsung’s Galaxy S20/S20+. Tall, bright, vibrant, and fluid are most likely the only adjectives you’d want to associate with a quality display panel and the OnePlus 8 Pro thoroughly incorporates those.

With its JNCD (Just Noticeable Color Difference) score of ~0.4, 10-bit color depth and almost blinding 1300 nits of peak brightness, its display is a visual treat. OnePlus has also included a custom MEMC (Motion Estimate Motion Compensation) chip to upscale low fps content to adapt to the phone’s glorious 120fps or the regular 60fps. This works similarly to “framerate interpolation” in TVs, which adds extra frame in-between the content’s frames to sort of give an illusion of smoothness.

The quad-camera mania has finally hit the OnePlus land. Here, the OnePlus 8 Pro has four cameras at the back. A custom 48MP Sony IMX689 primary lens, a 48MP Sony IMX586 ultra-wide-angle lens with 120º field-of-view, an 8MP 3x Telephoto lens, and finally a 5MP color filter camera. Here, it is evident that the company isn’t playing the number game as you don’t find a ridiculous “108MP” lens lying around.

The custom Sony IMX689 sensor has a dual native ISO for better noise reduction in low-light photography. Similarly, it also has 2×2 OCL (On-Chip Lens) for better focus in, once again, low-light photography. Therefore, it will be interesting to see how well it’ll fare against Google Pixel 4, which is known for its excellent nighttime images. Moreover, the telephoto lens is capable of 3x hybrid optical zoom and up to 30x digital zoom. Finally, the color filter for those quirky photos where you can play around with colors as you see fit. And then there’s a 16MP selfie camera sitting inside that punch-hole cutout in the display. 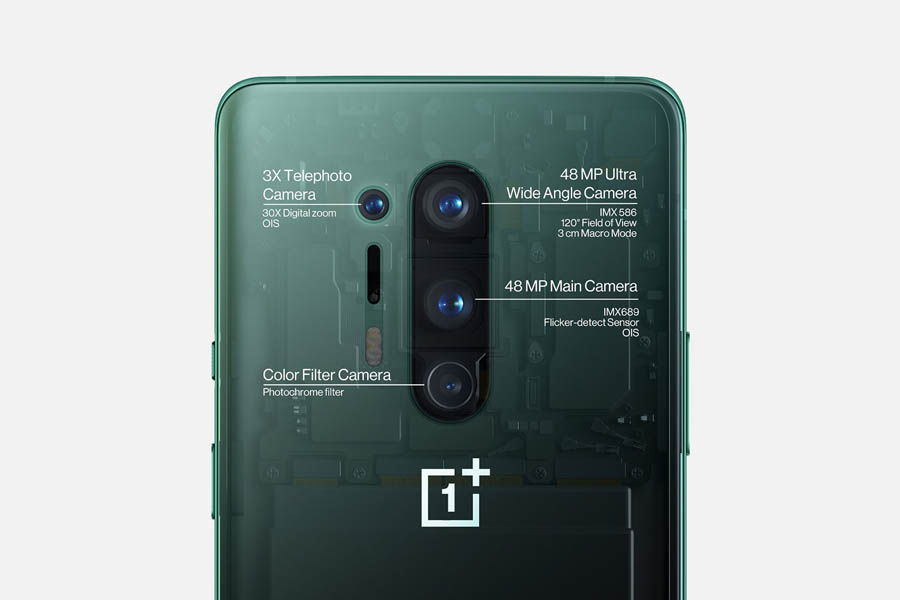 Moving to the video department, it comes with hybrid OIS + EIS video stabilization, almost effectively rooting out the need for an external stabilizer. Further enhancing videography are the 3 high-precision microphones for better audio capture. A lot of comparisons were drawn against Apple’s iPhone 11 Pro Max during the launch-event which only reflects just how confident the company is with its camera system on the OnePlus 8 Pro. Nice!

Aah, we’ve come to performance now. OnePlus has always been about “speed” and that’s one of the reasons why it’s been such a fan favorite. Taking a quick look back at the company’s history, the OnePlus 6 series features the flagship processor of its time and followed the slogan “The Speed You Need”. Similarly, the OnePlus 7 series carried the tagline of “Go Beyond Speed” while the company has gone with “Lead with Speed” this time around.

And as expected, top-of-the-line specs all around. It is powered by the latest Qualcomm Snapdragon 865 chipset, which also means native 5G support. This most definitely isn’t OnePlus’ first 5G rodeo. Oh, and before I forget, 5G doesn’t cause coronavirus, people! This is complemented by either 8 or 12GB of LPDDR5 RAM and 128 or 256GB of UFS 3.0 storage. Yeah, I would’ve like to see the newer UFS 3.1 protocol but it does have Turbo Write and HPB (Host Performance Booster) for enhanced read and write speeds.

In terms of battery, the OnePlus 8 Pro comes with a 4510mAh cell, which is the largest ever on an OnePlus phone. That’s an absolute necessity considering it needs to power that monstrous display with the 120Hz refresh rate. Coming to charging, wired charging is the same as last year’s Warp Charge 30T which can take the phone from 0 to 60% within 30 minutes. 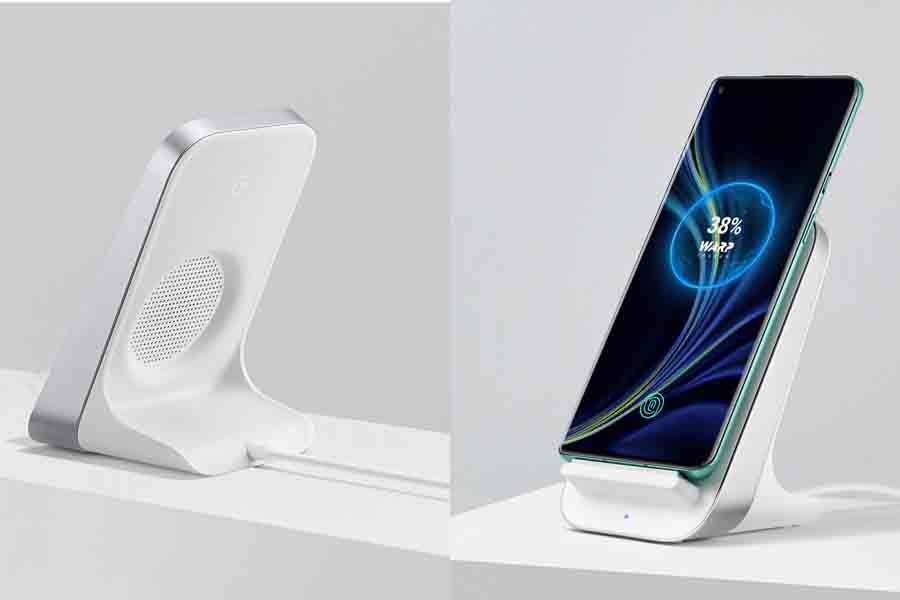 And as I said before, the OnePlus 8 Pro also comes with 30W Warp Charge 30 Wireless, which can juice up the phone to 50% in under 30 minutes of charge-time. It also supports reverse wireless charging.