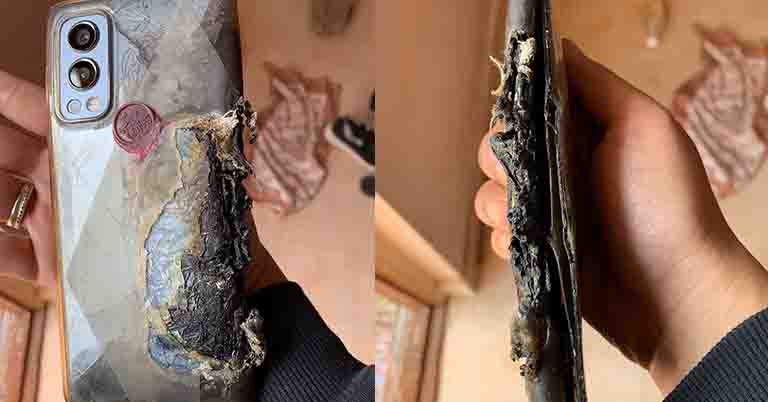 OnePlus Nord 2 has been among the most exciting premium mid-range phones of 2021. That being said, it has also been a subject of several controversies as there have been several reports of the phone exploding. Another such case has emerged in India in which a Nord 2 has exploded and even caused physical harm to the user. In this article, we will deep dive into this story, while also discussing other cases of the OnePlus Nord 2 explosion.

The latest incident of a Nord 2 explosion has taken place in India. It was first reported on November 3 by Suhit Sharma via his Twitter handle. The tweet even contains pictures to back up the claim.

As evident by the photos, the phone seems to have caught fire from the rear bottom left, thoroughly damaging the corresponding frame. The explosion has even damaged the transparent case that was on the phone.

What makes it worse is that the phone was in the owner’s pocket when it exploded. This has caused severe burns to the owner’s thigh with the skin being peeled off. It has left dark burnt marks as well.

@OnePlus_IN Never expected this from you #OnePlusNord2Blast see what your product have done. Please be prepared for the consequences. Stop playing with peoples life. Because of you that boy is suffering contact asap. pic.twitter.com/5Wi9YCbnj8

The tweet has caught the attention of a lot of people, including some popular Indian tech YouTubers. This has even caused fear among other Nord 2 users, many of whom are complaining about the heating issue of the phone. Some have even demanded OnePlus discontinue the phone and recall all the sold models.

OnePlus is yet to make an official public statement acknowledging the incident. But the company is already in touch with Suhit Sharma for further investigation. The following statement was provided to 91mobiles when they reached out to OnePlus over the matter.

“We take such incidents seriously. Our team has already reached out to the user and we are in the process of collecting the details to investigate this further.”

Past incidents of OnePlus Nord 2 explosion

It’s important to note that this is not the first time the Nord 2 has been reported to explode. There have been at least two other similar claims, one of which was flagged fake when the user deleted his tweet once it got mainstream attention. In the other incident, OnePlus eventually sent a cease-and-desist letter to the victim, claiming that the victim refused to co-operate in the investigation.

There was also a case of Nord 2’s 65W Warp Charger exploding in which OnePlus readily offered a replacement charger to the user. The cause of the explosion was “fluctuating external voltage” according to the company.