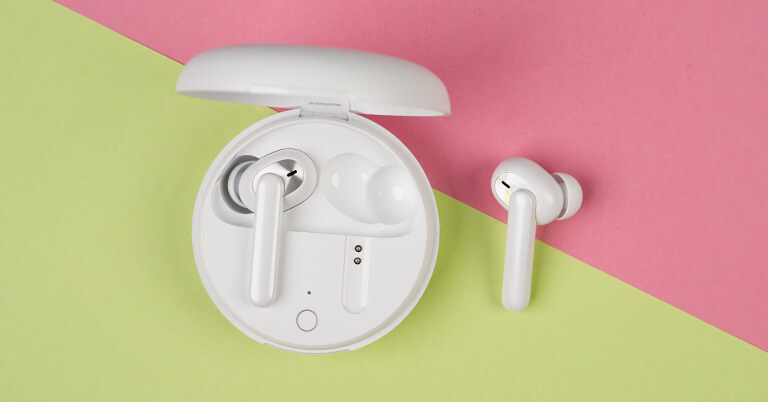 OPPO has a fairly decent lineup of Bluetooth earphones in Nepal. It was started with the launch of the Enco Free back in the first half of 2020 which was then followed up by the release of Enco W11, W31, and M31. Here, the W31 is the most expensive of the bunch and features some relatively premium features like wear detection, IP54 dust/water resistance, etc. So, the question remains – how good is it? Let’s find out in this review of the OPPO Enco W31 TWS earbuds.

As always, allow me to begin with the design. Borrowing a page out of Apple’s AirPods design book, the Enco W31 definitely doesn’t have the most inspiring of looks. It does manage to somewhat separate itself from the “AirPods-clone” tag as the stem itself is a little flatter than the circular design choice we’ve seen from Apple. Similarly, the ear tips have an oval pill-shaped look that also fortifies for a better fit. 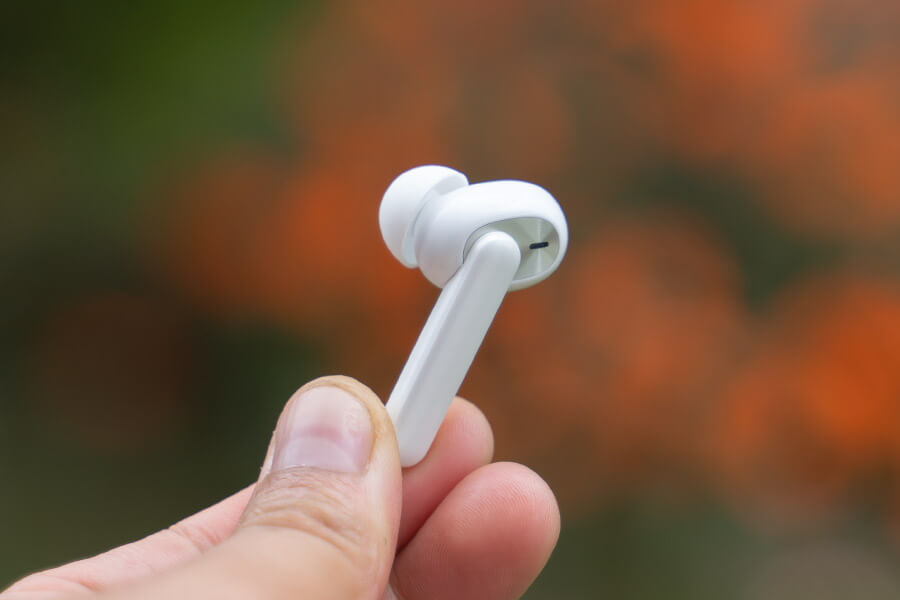 Furthermore, the Enco W31 is incredibly lightweight at just 4 grams per earbud. In comparison, the much more compact – Enco W11 weighs 10% heavier. As a result, the combo of the lightweight build quality and its soft silicone ear tips allowed me to keep the earbuds on my ears for a really long-time without noticing any sort of fatigue or discomfort. Moreover, OPPO also ships two pairs of ear tips of different sizes for free inside the box so that you can get the perfect fit. For me, the default one worked fine so I didn’t have to switch it.

Thanks to the quality fit, the Enco W31 manages to sit firmly inside your ears and wouldn’t come off even in the most aggressive of headbangs. Additionally, this also results in really good passive noise isolation which is fantastic. You can also wear it during your morning jogs, workouts, and such as the earbuds are IP54 rated against dust and water (from all directions). However, OPPO warns against using the earbuds under intense physical activity which may result in excessive sweat, so be on the lookout for that.

But it is the charging case that screams the argument against the look-alike debate the loudest. It has a circular hockey puck-like shape – reminiscent of the Huawei FreeBuds 3. And while the earbuds themselves have a glossy finish, OPPO has softened the deal with an all-around matte finish on the case. As a result, it feels really comfortable to hold on top of being an absolute eye-candy. It has a clamshell-esque opening/closing mechanism which felt a little weird at first as it feels like something from a makeup artist’s bag.

Anyway, the earbuds lay flat inside the case connected magnetically via the POGO pins for charging, which is indicated by an LED indicator. It glows red for low, yellow for medium, and green for full battery – pretty standard stuff. There’s also a Function button that you gotta press for a while (a couple of seconds at least) to pair the W31 with a new device. There’s the USB-C charging port at the back just below the hinge.

Here, pairing the Enco W31 is fairly boilerplate. It has Bluetooth v5.0 wireless connectivity with a rated range of 10 meters. As I said earlier, for first-time pairing with any device, you are required to hit the function button on the charging case for a while which then glows white indicating its universal visibility. But once paired, this step needn’t be repeated for consecutive connections. Under certain OPPO devices (like the Reno3 4G series) running ColorOS 7.0 or higher, one can also enjoy the “Quick Pairing” function. Just like other wearable manufacturers, this OEM-exclusive feature lets you instantly connect the Enco W31 with your OPPO phone once you open the charging case. Thus, you can seamlessly resume your playback state without going through all the hassle where your phone has to scan for available Bluetooth devices for pairing every time.

The controls on the Enco W31 are, to put it gently, mediocre. Actually, this is quite common with comparatively inexpensive TWS earbuds that have the stemmy design. Compared to the compact Enco W11, you’ll need to take out your phone much more often for playback control. Each earbud has capacitive touch at the top portion of the stem. I wish there was a single-tap control mechanism but unfortunately, it’s all double/triple taps here.

To begin with, you can double-tap the right earbud to skip a track while double-tapping the left one switches between the “Balanced” and “Bass” mode. Similarly, Enco W31 triggers your phone’s digital assistant with a triple tap on either side. And that’s it. If you wanted to play the previous audio or control the volume level, it requires you to use your phone instead. Fortunately, the OPPO Enco W31 has wear detection which works excellently and recognizes every single time you take out the earbud(s) or put them back. However, there is a slight delay of about half seconds for the W31 to process the situation.

Thankfully, these earbuds recognize your gentlest of touch which is great considering how firmly it sits inside your ear thanks to the silicon ear tips. But a piece of bad news lies on the input latency. For instance, it takes a while for the Enco W31 to acknowledge the touch input. And if you tap the buds with a little bit of haste, it fails to accurately assess the request or misprocess them altogether. I’d be triple-tapping the buds but instead of summoning Google Assistant, it would sometimes skip a track instead.

But when it comes to audio, the OPPO Enco W31 doesn’t disappoint. This is especially impressive since it has a rather small 7mm audio drivers. In contrast, the cheaper W11 has larger 8mm drivers. So, looking at the spec-sheet, many people may associate a larger audio driver with a better audio output which is just not the case. You see, it is how well the manufacturer optimizes it that determines the quality of audio coming out. Although a large driver does allow for more air pressure to move back and forth the speaker, considering the size of typical earbuds, it’s not going to matter much on an audio playback device of this size. As a result, only having a large audio driver would mean squat if the material used is of inferior quality or if it’s not tuned properly.

Yet, the Enco W31’s dynamic drivers have graphene-coated diaphragms which allow the earbuds to efficiently reproduce achieve the frequency range of 20Hz – 20kHz. In terms of audio codecs, it only supports the standard AAC/SBC format. Furthermore, it has binaural low-latency Bluetooth transmission meaning the audio signal is simultaneously transmitted to both left and right earbuds. With all this, I expected great audio from the Enco W31 and thankfully, it delivered.

Let’s first talk about the Balanced Mode. As the name implies, this mode reproduces even sound across all frequencies. Vocals on “Big Parade” by The Lumineers were crystal clear and the instruments just gracefully complement the singer’s audio. Similarly, Bob Dylan’s vocal in “Idiot Wind” played like a charm although bumping the audio to max resulted in some coarseness.

On the other hand, I was really impressed by Enco W31’s Bass Mode. I listened to retrowave & outrun tracks like “Nightcall” by Kavinsky & Lovefoxxx and the bass reproduction was amazing at about 70 – 80% volume. But I did notice a couple of instances of bass bleed especially when listening at full volume. “Luv (Sic) pt. 2” by Nujabes & Shing02 sounded great on Enco W31 too although woodwind instruments throughout the song were subdued by quite a bit. Watching regular videos on YouTube was quite pleasant as well as there is no noticeable latency. However, I wouldn’t trust it for fps or RPG gaming since the audio lag is enough to result in a distracting gameplay experience.

Finally, let’s get into the call quality. OPPO has included two microphones – one at the bottom of each earbud’s stem and one near the infrared optical sensor at the top. According to the company, this setup combined with environmental noise cancellation and an anti-wind noise chamber will give off incredible call quality. And yeah, it does have a better call quality compared to other TWS earbuds from the company. Unfortunately, during my review of the OPPO Enco W31, it was a little inconsistent at times as people on the receiving end would sometimes complain about the lacking loudness in my voice.

While I’m praising Enco W31’s audio & call quality, its battery life was incredibly devastating. Each earbud has a small 25mAh battery while the charging case includes a 350mAh cell. This is especially surprising seeing how the more compact & cheaper W11 has a much bigger battery. OPPO says it can last 3.5 hours of playback in one full charge which rises to up to 15 hours with the case. Sad to say, this claim didn’t quite resonate similarly during my testing. 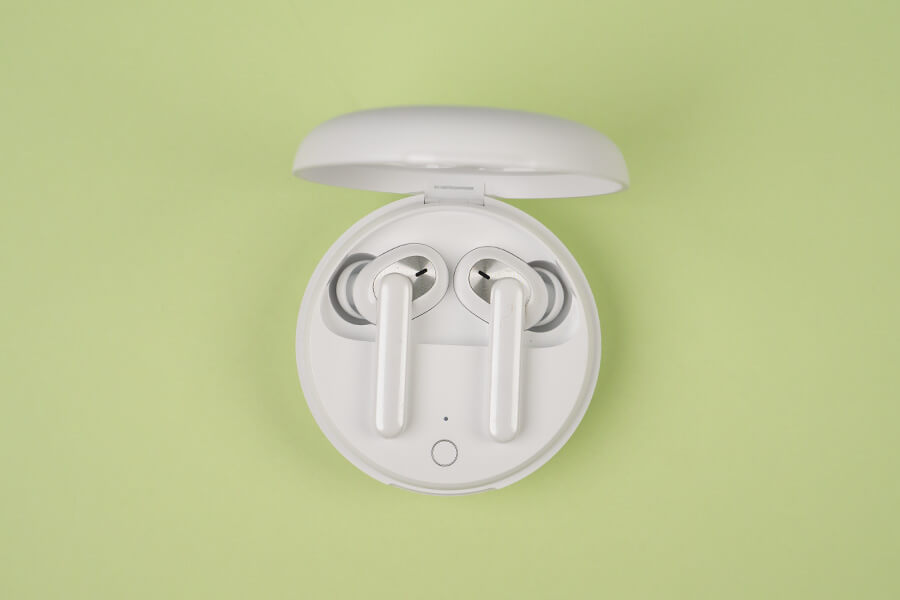 On average, I got just 2 and a half hours of playback at around 70% volume. This mostly consisted of listening under Bass Mode but still, that is a really short duration of battery endurance. As someone who has the habit of listening to music continuously for hours, it was incredibly annoying having to plug it every couple of hours. And it would’ve been some sort of compensation if the Enco W31 juiced up quickly, but no. It takes almost 2.5 hours to charge up the case via the 5V/1A charger. Maybe OPPO is prioritizing battery durability in the long run instead of fast charging. Still, the short battery life and a long charging period is just not a good combo.

Okay, let’s wrap up this review of the OPPO Enco W31. From a pure music listening experience, especially bass-heavy ones, it is absolutely incredible for the price. However, I would only recommend it to the most casual listeners only. If you’re into competitive gaming or have the habit of putting on earbuds for hours, this one’s not for you. The battery life is what really ticks me off as the playback period paired with the long charging period is just unacceptable to me. But if you just want some good TWS earbuds for short exercises, jogs, or don’t listen to music for that long, the Enco W31 may be a good option for you.