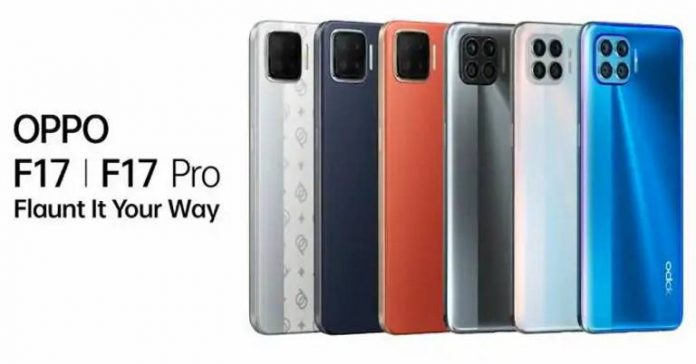 OPPO was supposedly done with its “F” series of smartphones but the company surprised with the launch of F15 earlier this year. And now, there’s a follow-up to that in the form of OPPO F17 & F17 Pro. As expected, the major selling point of these phones is a sleek design & a lightweight build. These devices are now making their way to Nepal as well. Let’s take a closer look at the new OPPO F17, Pro including its specs, features, expected price in Nepal & availability.

Starting with the design, the F17 Pro is incredibly sleek measuring just 7.48mm in thickness. At 164gm, is incredibly lightweight too. In comparison, OPPO F15’s spec-sheet reads 7.9mm thickness and a weight of 172gm. With this, the phone also manages to be the lightest in the entire “F” series. The rear panel has a shiny matte finish and the phone is available in three color options: Magic Blue, Matte Black, and Metallic White. F17 Pro’s edges are further 220° roundness for a better grip.

Coming to the display, you’re getting a 6.43-inches Super AMOLED panel with FHD+ resolution and the regular 60Hz refresh rate. Interestingly, the display has 180Hz of the touch sampling rate. Protected by Corning Gorilla Glass 3, this display boasts a 90.67% screen-to-body ratio thanks to the dual punch-holes for the front camera & minimal bezels. This display is also certified for HD playback in Netflix & Amazon Prime Video. Since it’s an AMOLED panel, you’re also getting an in-display fingerprint sensor. According to OPPO, the F17 Pro’s sensor can unlock the phone in just 0.3 seconds.

Getting to the performance, the F17 Pro is powered by MediaTek’s Helio P95 SoC. It’s nothing exciting but that’s always been the OPPO story. It is available in a single memory configuration with 8GB LPDDR4x RAM and 128GB of UFS 2.1 storage. You can further expand the internal storage using a dedicated micro SD card slot. OPPO has compensated the comparatively incompetent silicon with an “Anti-Lag Algorithm”.

This will apparently detect & clear data causing memory errors in the phone, which results in infrequent lags & stutters. To get specific, the anti-lag algorithm reduces the overall lag by up to 22%. F17 Pro runs on OPPO’s latest ColorOS 7.2 out of the box. The phone also has this new air gesture feature where you can pick up calls without physically having to touch the phone. You’ll be able to activate this feature from as far as 20 – 50 cm (vertically).

On the camera side of things, the OPPO F17 Pro has 6 lense in total. Upfront, you get two selfie cameras sandwiched between a small punch-hole cutout on the top left corner of the display. The punch-hole itself has a small diameter of 3.7mm. It houses a 16MP primary Sony IMX471 sensor alongside a 2MP depth camera. 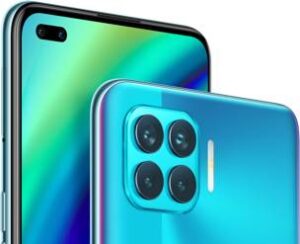 At the back, you’ll find 4 cameras arranged inside a squarish module. All the lenses have been mounted in a circular layout kinda resembling how Apple did its iPhone 11 series. Here, the primary camera is a 48MP Samsung sensor which is followed by an 8MP wide-angle and two 2MP mono cameras. This 48MP sensor takes 12MP binned images by default. There’s an LED strip at the side of the camera module.

An interesting camera feature on the F17 Pro is its multi-person hardware-level bokeh in photo and video which is thanks to the aforementioned dual-mono cameras. Other options include ultra steady video, AI Color Portrait, AI Beautification 2.0, etc.

OPPO F17 Pro is powered by a moderate 4015mAh battery which supports 30W VOOC Flash Charge 4.0. The company says it can fully charge the phone in just 53 minutes and just 5 minutes of charge gives you up to 4 hours of talk time, 1.9 hours of Instagram & 1.7 hours of YouTube. There’s also a neat AI Night Charging feature which gradually charges your phone overnight and lands on the 100% mark at an AI determined wakeup time. 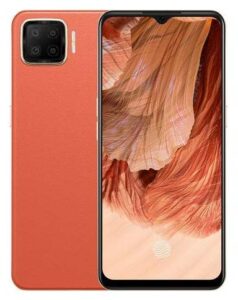 The regular OPPO F17 on the other hand has a 6.44-inches FHD+ Super AMOLED display with a small teardrop notch for the 16MP selfie camera. It features a quad-camera setup at the back as well consisting of a 16MP primary, an 8MP ultra-wide, a 2MP monochrome, and finally a 2MP depth sensor.

OPPO F17 is available in either 4, 6, or 8GB RAM and has an expandable 128GB of internal storage. Running the whole show is Qualcomm’s Snapdragon 662 SoC which is manufactured under the 11nm process. In terms of battery, it has a 4015mAh cell with 30W VOOC charging from its Pro sibling. And just like F17 Pro, the regular F17 is also incredibly slim & lightweight at just 7.45mm thickness & 163 grams.