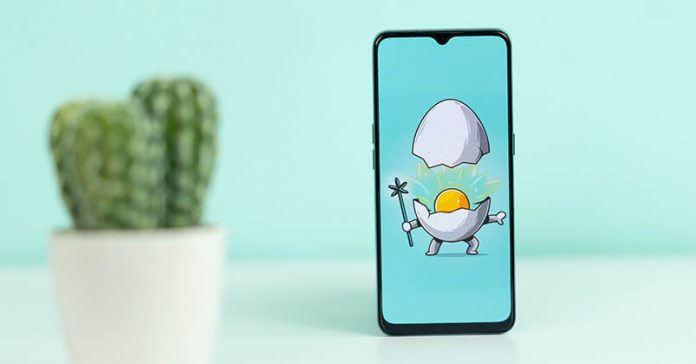 Oppo F15 is the latest device under the F-series to launch in Nepal. Over the years, Oppo has been pretty successful with its F-series lineup of smartphones. The lineup is for users looking for decent design and camera performance in the mid-range market segment. The Oppo F15 is the successor to Oppo F11 that was launched last year. The F15 arrived here in the month of March. We have used the device for the majority of the duration of the nation-wide lockdown. Read along to find out what we think of the new Oppo F15 in this review. Starting off, the design is among the strongest aspects of Oppo F15. The device is enclosed inside a plastic body. However, from a distance, the shiny glossy finish on the back panel may fool you into believing that its build using more premium material, say glass.

It is available in two color gradients – “Lightening Black” and “Unicorn White”. Personally, I find the latter more attractive and it is the one that we tested for this review. Though the rear panel is a treat to the eyes, it is slippery and attracts smudges and fingerprints. So we recommend you use a transparent case so that you can protect it while still flaunting its design. The side frames are made of plastic. Similarly, the frames are curved which makes it easier to hold the phone. The power button and the volume rockers are positioned well and are clicky enough. Overall the Oppo F15 is tall, slim, and feels good on hand. Oppo F15 features an AMOLED display which is a welcome upgrade from the LCD panel on the Oppo F11. It comes with an FHD resolution and a tall aspect ratio of 20:9. Colors look good on the panel. I didn’t face any issue with the brightness of the screen even while outdoors. You will be glad to know that the device comes with a Corning Gorilla Glass 5 protection against scratches.

There is a tiny notch on the top of the display. We are disappointed that the company didn’t opt for a trendier punch-hole display. The notch isn’t that bad though. It looks tiny compared to the tall display panel and isn’t distracting at all. Since it’s an AMOLED display, the fingerprint sensor is now under the screen.

For some odd reasons, Oppo has decided to go with MediaTek Helio P70. It’s the same chipset that we saw on both Oppo F11 and F11 Pro. While competing brands are offering the latest chipsets, Oppo has shamelessly used a chipset that is now over two years old. The chipset is capable of handling day to day tasks. With the 8GB of RAM, the device doesn’t disappoint with the multi-tasking either. However, Helio P70 can’t deliver when it comes to gaming. I tried playing PUBG on this device with graphics and refresh rates both set to high, and the experience was not so good.

Not only did I experience lags and stutters during gameplay, but the phone also started heating instantly. So if you want longer gaming sessions and smooth gameplay, you will be better off with settings kept at medium. Disappointed with the way the device ran PUBG, I switched to Call Of Duty Mobile. Here, the experience was comparatively better than the time I tried PUBG on it. OPPO F15 comes with 128GB of internal storage. You can also expand it via a microSD card. The card slot provided here is a dedicated one and you don’t have to sacrifice the dual-sim functionality for extended storage.

Compared to F11, Oppo has bumped the number of cameras on the back from two to four. The 48MP primary camera shoots pictures at 12MP in the default setting. It can take 12MP shots utilizing the pixel binning technique.

Changing the setting from 12MP from 48MP was a hassle in itself. In most of the devices, such a setting is provided on the main camera interface itself. However, in Oppo F15, it is hidden inside the aspect ratio setting.

Talking about camera performance, the primary camera is capable of taking decent shots under proper lighting conditions. The colors are both punchy and popping, and the dynamic range is pretty good too.

There is a “Dazzle Color” mode which results in more saturated images and it is better to turn it off most of the time.

Moving on, the 8MP ultra-wide-angle lens increases the Field of View but sacrifices dynamic range in the process. It also doubles as a macro lens. But taking macro shots is quite tricky, and most of the time I couldn’t get it right.

I compared it with the 12MP wide-angle lens found in Samsung’s Galaxy A51 and noticed how the F15 wasn’t quite able to deliver similar images. But that doesn’t mean F15’s wide-angle images are unusable.

The portrait shots aren’t downright horrible but it doesn’t do a perfect job when it comes to edge detection. A51, on the other hand, has a much better background blur and subject focus.

The night shots suffer from a lack of details. Even with the night mode on the pictures are noisy and full of grains. Once again comparing it with the Galaxy A51, the regular nighttime images are kinda-sorta similar in both.

But using the dedicated night mode feature, A51 is capable of delivering a better exposure control. Despite this, there isn’t much difference.

The selfie camera is on par with that other mid-range devices are providing at this price range. The skin tone is good and so is the HDR capability. However, portrait selfies suffer from poor edge detection.

The phone runs on ColorOS 6 based on Android 9. Oppo has been consistent with the monthly security updates. At the time of writing this review, the OPPO F15 has already received the security patch for June 2020. It comes with some bloatware and most of them can be uninstalled. You can even uninstall some of the Google apps such as Google Photos, Duo, Drive, and News. The display is tall and I had problems reaching all the parts of the screen, so the smart sidebar proved to be really helpful while navigating.

Oppo F15 misses out on Android 10 features such as the Night mode. We would have loved to test the Dark Mode on the AMOLED screen but the feature isn’t there. Oppo has already announced that their roadmap for ColorOS 7(Android 10) update. According to it, Oppo A91 (rebranded F15 in some regions) will be receiving the update in July. We expect the Oppo F15 to receive the update around the same time as the two phones look very similar.

The Oppo F15 features a massive 4,025mAh battery that supports 20W VOOC fast charging. Because of its mediocre battery size, the phone struggled to last over a day of usage. However, if you aren’t a hardcore user as I am, it should last you throughout the day. Charging the phone is no problem either. The 20W charger provided inside the box can fill the charge form 0 to 50% in 30 minutes. More importantly, the whole charging process takes a little over an hour.

Oppo F15 is a decent mid-ranger if we take into account its color gradient design, accurate display, camera performance, and battery life. Compared to its predecessor, it now has an AMOLED panel, in-display fingerprint, Type-C port with 20W VOOC charging, and double the amount of camera. However, it still has packs-in a two-year-old processor that performs horribly when it comes to gaming. It doesn’t operate on the latest Android version but we expect Oppo the rollout within July.