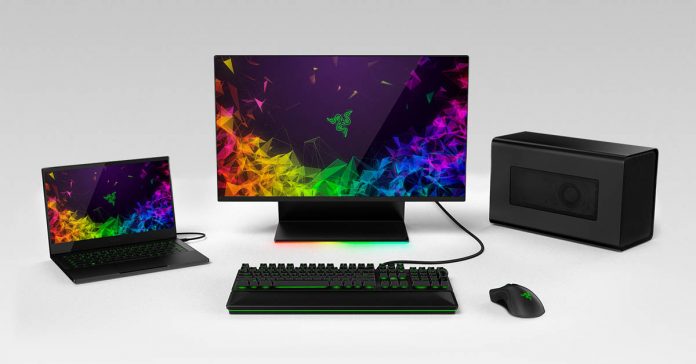 With all the gaming laptop launches in CES, did you really expect Razer to not join the party? The then gaming peripheral manufacturer debuted its first laptop, the Razer Edge gaming tablet computer back in CES 2013. The highlight announcement was the Razer Raptor, a new gaming monitor, alongside an incremental upgrade over it’s existing Razer Blade 15. Spoiler Alert!! it gets the new RTX enhancements.

Razer just took the wraps off an all-new eSports oriented gaming monitor, the Razer Raptor. It’s a 27-inch IPS panel with a 4mn response rate. Whatever the specs may show, it’s cable management system is definitely the highlight here. The monitor shows five cables running across it’s back in the most perfect way, at least the renders appear that way. The 4mn response rate can be reduced to a perfect 1ms with motion blur reduction. The Raptor is, however not a 4k monitor but sports a humble 2560×1440 resolution (WQHD) display. It can reach a maximum refresh rate of up to 144Hz and supports up to 95% of the DCI-P3 color gamut. Maximum brightness reaches up to 420-nits which is probably more than enough for indoor usage. The Raptor also supports HDR contents.

Sadly, if you just bought the new Turing graphics processors, this monitor only supports AMD’s free sync technology. You could look at Nvidia’s new Adaptive sync technology for a fix. Which you might give there is really no other monitor quite like this one. I mean it has a seriously thin 2.3mm bezels on all three side, except for the relatively thick bezels at the bottom. It gets the Chroma-enabled base so you can sync all your Razer peripherals like mouse, keyboard headset or mousepad’s lighting with your monitor. The cable management you see in the picture above shows green lines running across it’s back. If you were wondering what they are, it’s the HDMI, Display Port, a USB port and finally the power port.

An actual over the top feature is the panel’s 90-degrees upwards tilt so you don’t need to turn your monitor while hooking up a cable. The base is just a big piece of aluminum providing the panel a firm stance. The Razer Raptor is priced at $699 and will be in 2019 but an exact date hasn’t been revealed yet.

Razer announced a refresh to last year’s Blade 15 with an RTX GPU overhaul. The rejuvenation includes new display technologies, one of which featured an experimental OLED panel. A backup display showed off an [email protected] panel. Sadly other components remain the same, which means it gets a Core i7-8750H, 16GB RAM and 512GB of SSD. Pricing for the new Razer Blade 15 Advanced starts at $2,299 for the base model while sales will begin January 29th.