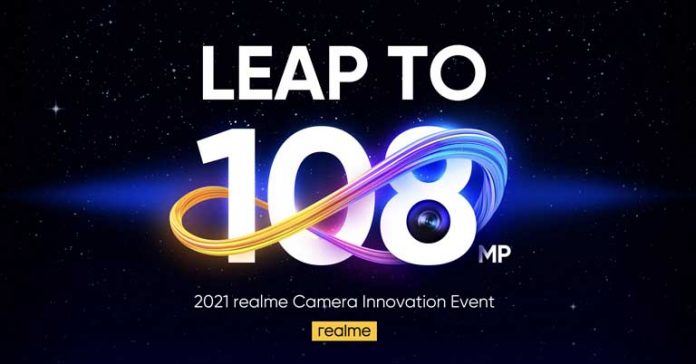 Today, Realme hosted an online event to discuss the improved camera features that the company will debut with the upcoming number series. The event was titled Realme 108MP event hinting at the use of a 108MP camera sensor on the upcoming Realme 8 Pro. In this post, we will be taking a look at all the new camera features that the Realme 8 series will introduce as highlighted in the Realme 108MP event.

Realme 8 series will be a camera–centric smartphone lineup. The highlight of the series will be the inclusion of a 108MP sensor in the Realme 8 Pro. In fact, this phone will be the first device from the company to feature a 108MP camera. Realme has opted for the Samsung HM2 sensor here. The same sensor has been previously used in Xiaomi phones like Redmi Note 9 Pro 5G and Mi 10i.

This camera utilizes a 1/1.52″ image sensor and has a total of 12000 x 9000 effective pixels. For better image quality in low-light conditions, the camera makes use of 9-in-1 pixel binning (nona-binning). HM2 supports Samsung’s new imaging technologies like ISOCELL Plus and Smart ISO.

With the Realme 8 Pro, users will be able to shoot in 12MP pixel-binned as well as 108MP mode. The pictures taken with the latter will retain more details, clarity, and sharpness. But as expected, those shots will come with larger file size.

If you like cropping and zooming in on the picture, you will be happy to learn about Realme’s new In-sensor Zoom technology. When you use 3x zoom on the 108MP mode, because there is no optical zoom, the photo taken will actually be a portion cropped from the original frame. However, with the new in-sensor zoom feature, the camera will take up to 8 different 12MP pictures of the zoomed part. The pictures then go through an image clarity algorithm for a nice and clear 3X zoomed photo.

Realme claims that the picture taken through this feature can even be sharper than some optical telephoto lens. Realme also compared the 3x pictures taken using in-sensor zoom against pictures from a 3x telephoto lens from Realme X50 Pro.

Realme even confirmed that the second generation of the Starry Mode will debut with the Realme 8 series. The biggest change here is that the brightening of the stars will now be handled by the ISP (Image Signal Processor) itself. Prior to this, it was done via algorithms. The involvement of ISP means that the pictures will have reduced noise and brighter-looking stars.

Another exciting camera feature in the Realme 8 series is the Tilt-Shift mode. This will allow your smartphone camera to replicate tilt-shift photography cameras. This is done by focusing on a certain part of the frame and adding bokeh to the rest. The end result is a miniature-like scene. Users can even control parameters like location, title angle, and transition effect. It is also supported in time-lapse videos.

Realme has also added some trendy new features to portraits on the Realme 8 Series. The first among these is called Neon Portrait. When enabled, the camera recognizes the light source on the background and emphasizes more on it for a better end result.