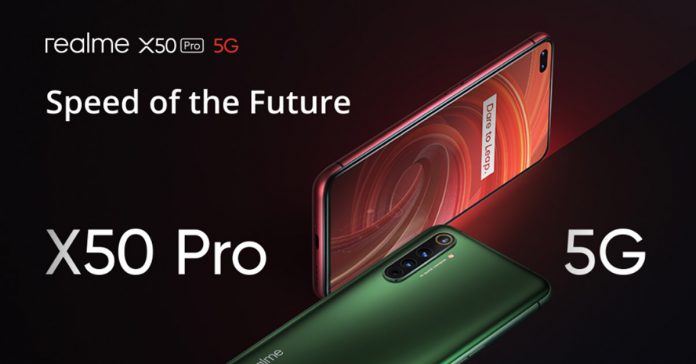 New day, new phone – ain’t that the story these days? Well, this is the harvest time of smartphones, to be honest. So expect your newsfeed to be swarmed with news of smartphone launches this time around. And adding an entry to that list is the new Realme X50 Pro 5G. After having gone China-exclusive with the original X50, the new Realme X50 Pro 5G has been launched in India. Let’s find out more about the phone specifications, features, price, and expected availability in Nepal.

There’s not much to be wowed about by the Realme X50 Pro’s design, to be honest. It is heavily inspired by the regular X50 in terms of its looks; there a dual-punch hole cutout for the two front-facing cameras and even the rear cameras are arranged in a similar fashion. The X50 Pro 5G comes with Corning Gorilla Glass 5 protection both on the front & the back. There are two “interesting” color options this time around – Moss Green & Rust Red. It has a matte finish and looks kinda undersaturated, which is growing on me every time I look at it.

Moving to the displays, it’s got a 6.44-inches FHD+ Super AMOLED panel with a 92% screen-to-body ratio. But that’s not the most impressive thing about this display. It’s got a 90Hz refresh rate, which is pretty common for a 2020 phone. But what’s even more exciting here is that the Realme X50 Pro 5G’s display has got 1000+ nits of peak brightness with 105% NTSC & 100% DCI-P3 coverage on top of HDR10+ compatibility. Woo! Such a tremendous display in an upper mid-range phone is really exciting!

Being the “Pro” model that it is, the phone comes boasting the latest Snapdragon 865 chipset. And we all know that this is a 5G-ready SoC. Pair that with its India-launch, that makes the Realme X50 Pro the country’s first 5G smartphone. That’s quite an important title to have in one’s name, so kudos to Realme! But only a faster chipset doesn’t make a faster phone. 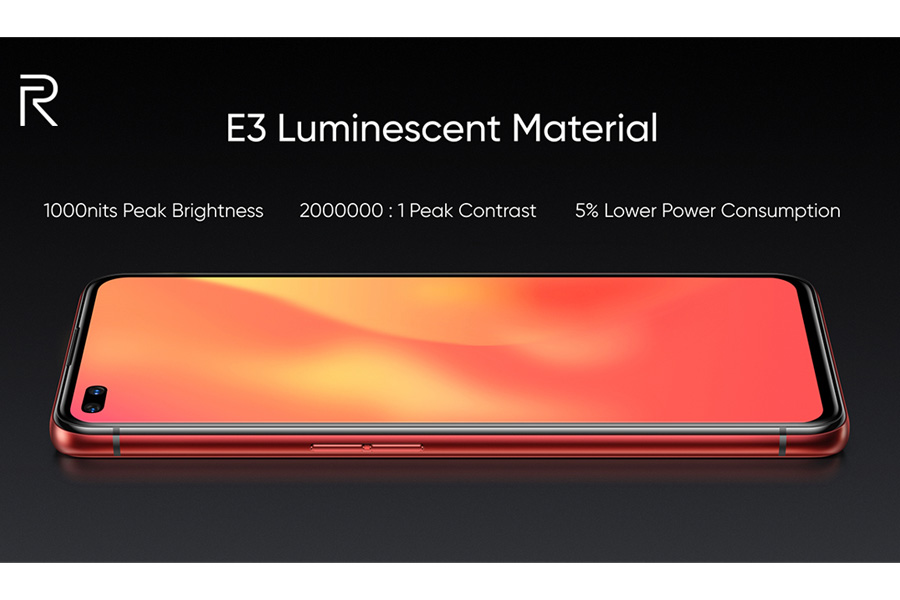 Apart from 5G, there’s a 360º surround antenna, WiFi 6, NFC, dual-channel GPS in terms of faster network connectivity. In terms of memory as well, the Realme X50 Pro comes with either 6, 8, or 12GB of LPDDR5 RAM, though the storage isn’t the latest UFS 3.1. You can choose between either 128 or 256GB of UFS 3.0 storage. Realme also claims that the phone has scored over 600K in AnTuTu Benchmark, making the X50 Pro the first phone to cross that landmark. But we’ll have to look out for real-life tests to verify the legitimacy of that claim. The phone runs on realme UI 1.0 based on Android 10 & ColorOS 7.

Getting to the cameras, there’s a dual-camera setup on the front placed inside a punch-hole cutout. The primary lens is a 32MP Sony IMX616 sensor while there’s an 8MP ultra-wide-angle lens with 105º field-of-view as well. Now, the rear cameras are where it gets interesting, and a little disappointing as well, not gonna lie.

You are getting a quad-camera setup like the X50, but the lenses are a little different on this one. The primary lens is a 64MP Samsung ISOCELL GW1 sensor, which can take 16MP pixel-binned images. It’s not a bad lens, but it’s old news and the Sony IMX686 would’ve been a much safer choice. Apart from that, there’s also a 12MP telephoto lens (with up to 20X digital zoom), an 8MP ultra-wide lens which also doubles as a macro lens, and a 2MP B&W portrait sensor.

The battery is another thing to get excited about on this phone. You’re getting a decently large 4200mAh battery with 65W SuperDart Charge. As a result, the Realme X50 Pro shares the fastest smartphone charging capability with its parent company OPPO’s Reno Ace, which came with a similar 65W SuperVOOC Flash Charge 2.0. Realme claims that you can fully charge this battery from 0 to 100 within 35 minutes. Furthermore, a 20-minutes charge fills the juice up to 60%, and with a mere 3-minutes charge, the phone can endure up to 4 hours of call time.

With all the spec-sheet that it’s packing, that’s damn competitive pricing, don’t you agree? As a result, the Realme X50 Pro falls right under the premium mid-range territory of OnePlus. So, it’ll be interesting to see how OnePlus & Xiaomi too will retaliate the Realme aggression.