Home Reviews Xiaomi Mi 10i Review: After A Month Of Use 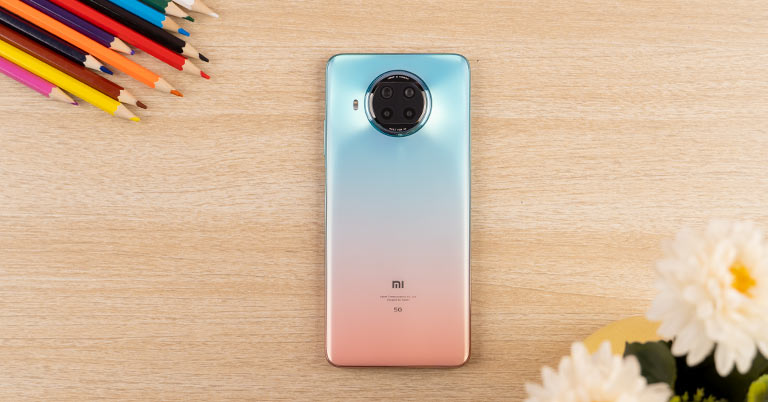 Interestingly, Xiaomi India says the “i” in the Mi 10i means Made for India; Made in India and customized by the Indian product team. But as we all know, it’s an exact replica of the Redmi Note 9 Pro 5G that was launched a month earlier in China. So, what can you say?

Right off the bat, it’s good looking phone as well. There are 3 color options to choose from and I got myself the Pacific Sunrise variant, which looks stunning. And during my long-term usage, I also got used to the phone’s weight and I really like its overall heft and hands-on feel. In comparison, It has a much better tactile feel than the company’s cheaper options like the Redmi Note 9 Pro and POCO X3.

For added durability, the phone comes with Gorilla Glass 5 on the front/back with plastic frames. But since the Mi 10i is a premium mid-range phone I think Xiaomi could have included metal frames here, maybe… to make it even more premium looking.

At the back, there’s also this huge camera bump that protrudes quite a bit. And if you don’t cover it up with a case, the lenses are quite prone to getting scratches. For this, the company does provide a matte silicon case in the box.

On the display front, you still don’t get an AMOLED screen on the Mi 10i, which is a kinda letdown considering its price. And even the upcoming Mi 11 Lite is expected to come with an IPS LCD panel.

This display can get bright enough for casual outdoor usage and has good colors and viewing angles. With HDR10+ compliant and Widevine L1 certification, it suffices for all kinds of activities from gaming to browsing to watching videos and stuff. 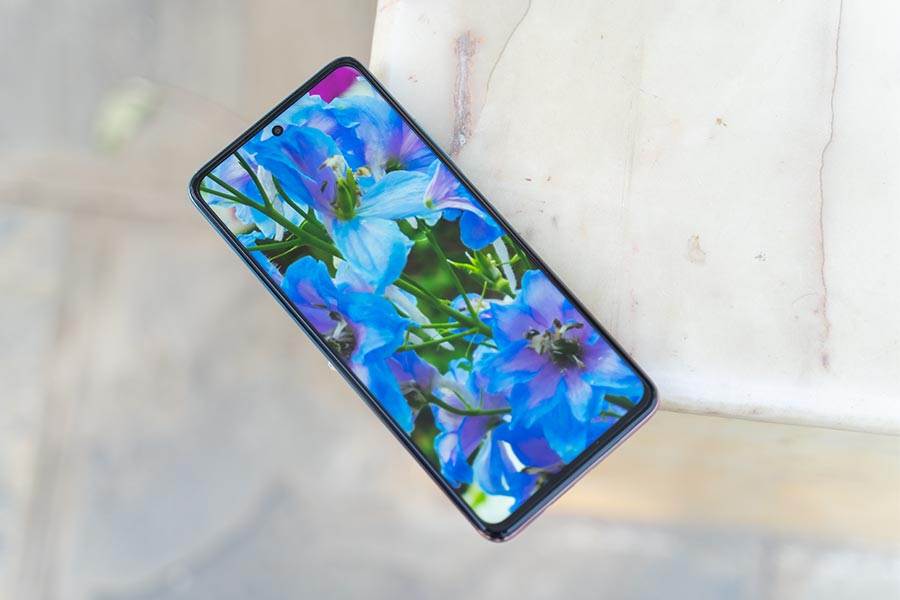 However, bringing the Galaxy M51’s Super AMOLED screen into the picture, well, Mi 10i cannot match the vividness and contrast. But then again, Mi 10i has a 120Hz refresh rate which, I guess, balances things out. This 120Hz display is also adaptive, which means it can automatically dial down its refresh rate to 30Hz for videos or go all out 120Hz in gaming and other apps if needed.

In terms of audio, Mi 10i also has dual-speakers, so watching content on it has been a really good experience. The speakers are not necessarily the loudest, but they sound fuller and are not disappointing.

By the way, there’s also a tiny little notification LED on the speaker grille upfront. I think it’s amazing that Xiaomi has included one in the phone considering how it is almost extinct these days.

Moving onto the performance of the Mi 10i, you get the Snapdragon 750G. It is a relatively newer Qualcomm chipset with 5G capabilities.

Comparing it with the Snapdragon 730G, which was one of the most popular SoCs in 2020, 750G outshines it by a decent margin. In real life though, the performance difference is nominal. I did an app opening and multitasking test between the Galaxy M51 and the Mi 10i and the results are quite neck-and-neck.

But, gaming is where you will notice some differences. For instance, In PUBG mobile, at HD graphics and High frame rates, you will experience very minimum stutters on Mi 10i while the lags and stutters on the M51 are more prominent. On the other hand, playing optimized games like COD, both the phones will perform similarly. Also, there was no heating issue or such on the Mi 10i even after some heavy-duty tasks or gaming for an hour, so that’s great.

General usage is also a pleasant experience on the Mi 10i. And the 120Hz refresh rate compliments the performance even further. Likewise, scrolling through social media or web pages and navigating the UI is fast; without even a single hint of lag.

Out of the box, the Mi 10i comes with MIUI 12 based on Android 10. Even though Android 11 already debuted almost 4 months ago, it is quite disappointing that Xiaomi ships the phone with Android 10-based MIUI.

Anyway, unlike the previous MIUI version, I found this version of MIUI to be a lot more optimized for one-handed usage. The notification menu pulls down right to the bottom. And most of the things in the settings menu are also placed well within your fingers’ reach. Xiaomi also provides you with the option to change the layout of the notification shade (if you feel like it). This one is a lot more Apple-ish and some of you might have a problem with that.

On a different note, like with Xiaomi’s cheaper Redmi lineup, the company has decided to push ads in certain areas on the Mi 10i too—like in the window that appears right after downloading an app. You can prevent this by going to the “Don’t show recommendations” section in the settings. I particularly have concerns about the fact that while people like you and me are knowledgeable enough to dig inside the settings and remedy the situation, someone who isn’t very tech-friendly might suffer from a lot of unwanted ads. Even when you swipe left from the home screen, there’s an entire section where you get game recommendations.

I was fine (as I could be) with ads on cheaper Xiaomi phones to keep the price of the device as low as possible. But since this phone is competing against the likes of Galaxy M51 and OnePlus Nord, Xiaomi should be focusing on the overall user experience as they are paying a premium for this phone as opposed to say… the Redmi Note 9 Pro or the Poco X3.

Anyway, let’s talk about the cameras now. At the back, there are 4 lenses in total, a primary 108MP Samsung’s 108MP ISOCELL HM2 sensor, an 8MP ultrawide lens, a 2MP depth, and a 2MP macro camera along with a 20MP shooter for selfies.

Comparing its picture quality against the mighty Galaxy M51, you will notice a slight red tint in Mi 10i’s images which is not an accurate representation of the colors. On the other hand, M51’s colors not only look livelier but more natural as well.

Like the nine-in-one pixel binning implemented by Samsung on its flagship phones, Mi 10i applies the same principle, thereby producing 12MP shots. And that’s the reason for its photos turn out slightly sharper than that of the Galaxy M51.

Regardless, because Mi 10i is a mid-range phone with an inferior Image Signal Processor and software optimization compared to that of flagship phones, you simply can’t expect its image quality to be on par with the 108MP camera phones like S21 Ultra or the Mi 11.

Moving on, the same red tint story continues for the ultrawide images too.

So in both cases, I prefer the Galaxy M51’s color science. Also, M51 has a slightly wider field of view in ultrawide shots too.

Even portraits from the Mi 10i have this prominent red tint that sometimes makes the subject look ghastly.

And for some reason, when you zoom in, the excessive details on the subject’s face makes you look like a painting! Still, its portraits are not bad in all regards and sometimes does a better job than the M51!

In terms of selfies, I found it very difficult to choose a definitive winner between the two phones.

Both phones project a slight red tone on the face while being fairly detailed with good colors, so I’d say both phones pass the test here.

However, the Galaxy M51 does have an edge in the video department. Even its 4k/30fps videos come out stabilized, unlike the Mi 10i’s recording which looks rather shaky. Then again, Mi 10i lets you shoot at 1080p 60fps whereas M51 is void of that option.

Upfront, Mi 10i only lets you shoot 1080p videos from the selfie camera; while the M51 can go straight up to 4k/30 fps. So, if you are into vlogging or such, Galaxy M51 will fare better. But for general purposes, both phones offer decent video capabilities.

Finally, the 4,820mAh battery on the Mi 10i could squeeze out exactly a day’s endurance and no more. And this is where the Galaxy M51 earns a big leap; its 7000mAh battery easily lasted me for 2 days. 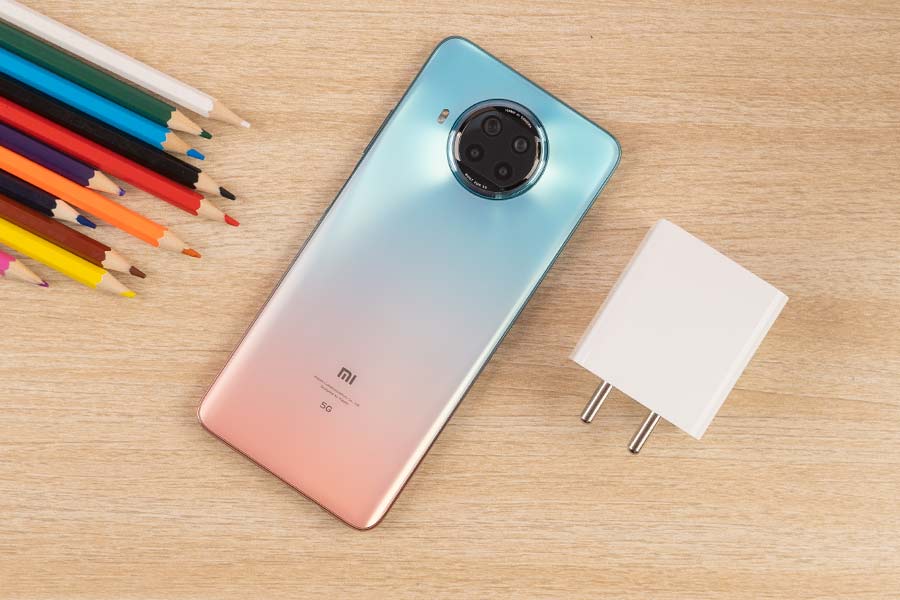 Xiaomi has included its proprietary 33-Watt power adapter inside the box just like we saw on the Poco X3 and Redmi Note 9 Pro Max. This 33W charger is quite fast. And takes just about an hour to get a 4800mAh cell from 0 to 100%.

Let’s conclude this review of the Xiaomi Mi 10i. Like with almost all the Xiaomi phones, the Mi 10i is also a very good offering. No doubt. It does fall short in some aspects when compared to the competition like Samsung’s Galaxy M51. But on the brighter side, it excels in aspects like design, a higher refresh rate display, and a slightly better-performing chipset.

I only wish that the company optimizes its 108MP flagship-grade camera sensor with future updates. Because even though the camera hardware looks superior on paper, it isn’t at all better than the 64MP sensor on the Galaxy M51.