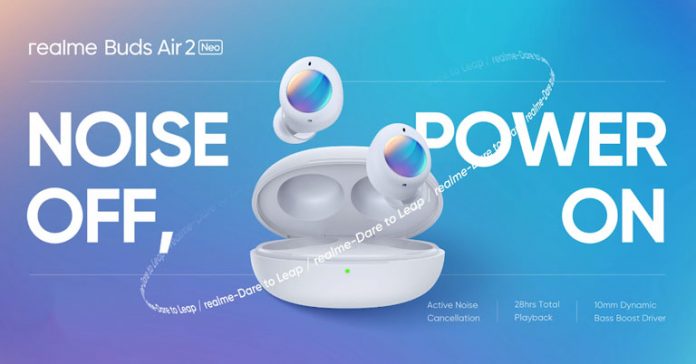 Today, Realme Nepal launched three new products in the domestic market, including two new TWS earbuds. The cheaper of the two is the Buds Air Neo 2 which is a toned-down version of the Buds Air Neo from last year. More importantly, it now inherits ANC technology like its pricier sibling. In this post, we will be taking a looking at the specs, features, official price, and availability of Realme Buds Air 2 Neo in Nepal.

Above all, it is the cheapest TWS in the Nepali market to come with Active Noise Cancellation (ANC). With that out of the way, let’s learn more about the Buds Air 2 Neo.

The first thing that caught our attention is the design. While the original Buds Air Neo resembled Buds Air, its successor looks a lot like the Buds Q instead. That is, it comes with a pebble-shaped charging case and Galaxy Buds-like earbuds. The charging case has an LED on the front and a button on the inside which is for first-time pairing with a phone. Talking about the buds, they now come with ear tips and thus, should offer a better seal around the ear. Unlike Buds Q, the Buds Air 2 Neo doesn’t have the company’s logo on the touch-sensitive area. It is replaced with a rainbow-like design, which looks a lot cooler if you ask me. The earbuds are also IPX5 certified and thus should overcome sweat and minor splashes.

Coming to the features, the highlight here is the inclusion of Active Noise Cancellation (ANC). Upon enabling, Realme claims that it can reduce the voice by up to 25dB. There is also dual-mic Environment Noise Cancelling (ENC) that kicks in when you are on a call with someone. Plus, the Transparency Mode lets you talk to someone without having to take the earbuds off.

In terms of audio, the Realme Buds Air 2 Neo features a 10mm Liquid Crystal Polymer driver. Together with the Bass Boost+ algorithm, it tries to deliver deeper bass and clearer stereo. However, you may need to manually turn on the AAC HD audio codec for the algorithm to work.

Powering these earbuds is the custom Realme R2 chip. It is the same chipset powering the more expensive Realme Buds Air 2, and also the reason the cheaper Air 2 Neo also gets the same ANC and 88ms latency mode. The earbuds come with the latest Bluetooth 5.2 and also supports quick pairing.

There is also a gaming mode that promises latency as low as 88ms. Users can enable it from the Realme Link app.

Each earbud features a 40mAh battery that can last up to 5 hours on a single charge. The number is on par with the more expensive Realme Buds Air 2. Together with the 480mAh battery of the charging case, Realme is claiming up to 20 hours of runtime with ANC on. Turning off the feature results in an even better battery backup of up to 28 hours.

Checking the remaining battery is also easy. Realme says whenever you connect the earphone with a phone, battery information will appear as a pop-up on the screen.