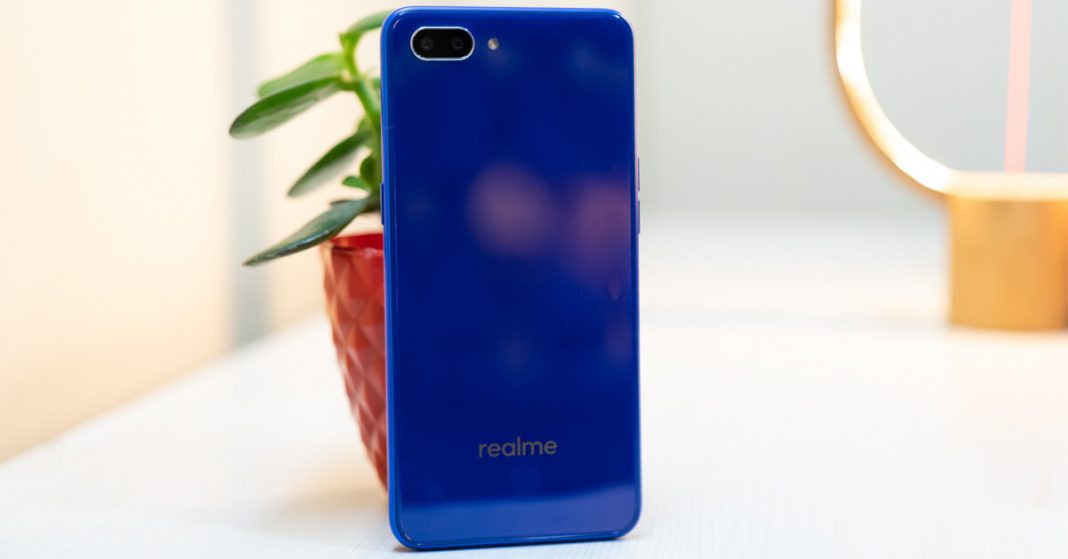 So the Realme C1 is a phone that launched quite some time ago. And the Realme brand is known for providing good specs at affordable prices. This one is a budget phone that seems to have pretty decent specs on paper. Which also led to many asking for it, even before it arrived in Nepal. And it did, some two weeks ago. But, it came at a time when there is competition in the market. So, how does it fare with the competition?

Being in the budget segment, this phone has a plastic build with an aluminum frame. It is big and makes its presence known in the hands. The plastic back has a glossy finish, making it look premium but leaving it prone to fingerprint smudges and scratches. So, I recommend using it with the transparent case that comes inside the box. 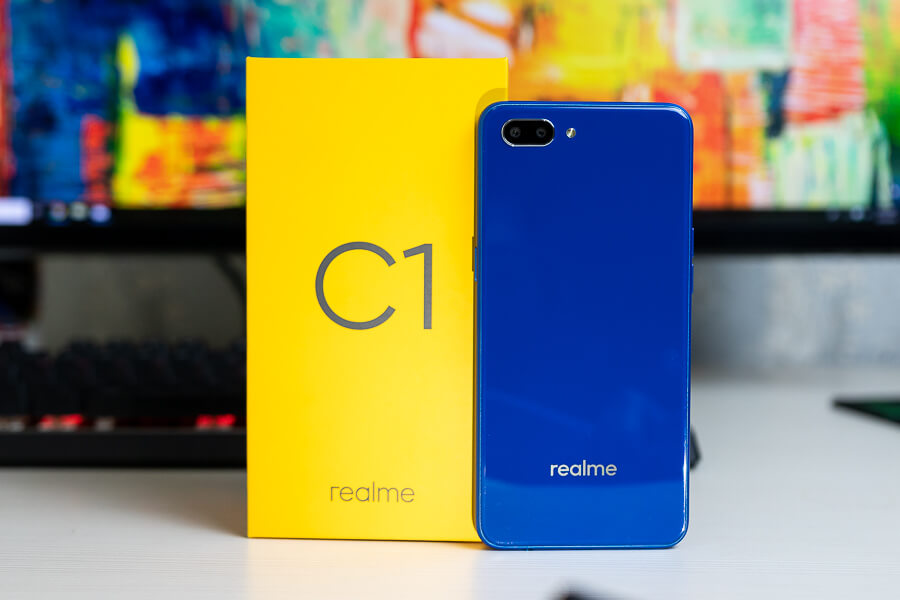 The back has nothing but the dual camera setup. No fingerprint sensor, here. So, basically, this looks like the Oppo A3s, but in a different color. The left side has the volume rockers and the SIM slot, and the right has the power button. The micro USB port, 3.5 mm headphone jack and the speaker grill rest at the bottom.

Ports and Buttons
1 of 3

With a plastic construction, the phone is light and has a good grip. But might be a bit too big for some people. The look and feel of the phone is pretty nice, and I feel like there are very fewer phones like this at this price.

On the display front, something worth mentioning right up front is that even though it’s a budget phone, you do get a Gorilla Glass 3 protection. That was an option not available on the Oppo A3s, which is more expensive than this. There is also a notch up top housing a selfie camera, earpiece, and some sensors. The notch seems to have an okay size. It also has a considerable chin and bezels, too.

The screen is a 6.2″ IPS LCD panel with HD+ resolution and 19:9 aspect ratio. So, yes, this is the Oppo A3s back and front. Only cheaper. 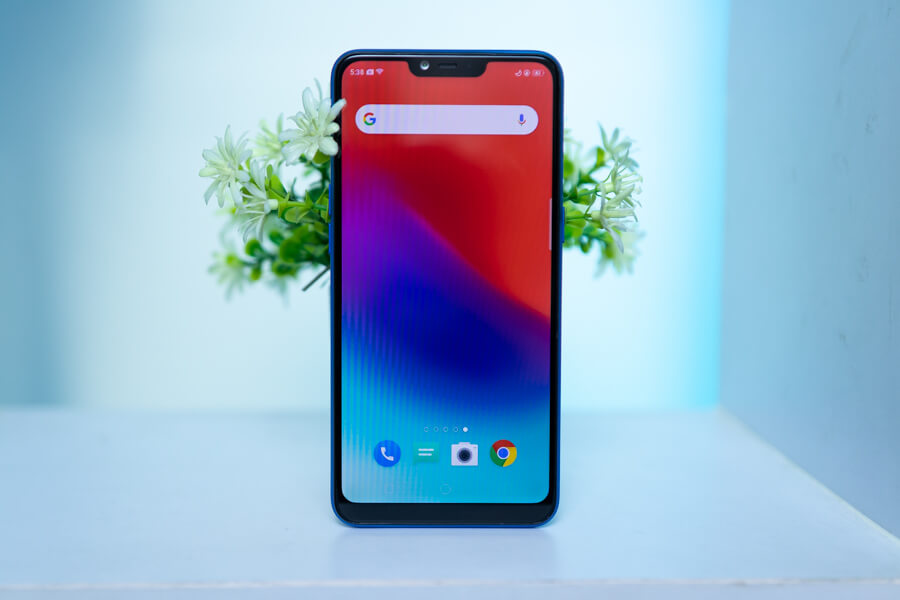 It’s a good display – with quite the punchiness, but some may find the colors too vibrant. It could do with a bit of calibration. The brightness is also fine…you can use it okay in the sunlight, but not without some adjustment, though. It comes with Auto-Brightness features, so, it’s all well. There are also various display modes. A night shield built into the software of the device with a ‘Blue-light filter’, ‘black-n-white’ mode and a ‘comfortable night-time reading’ mode.

For the price, I really liked the display overall. There’s nothing you have to complain about, except that it could have some balanced colors rather than all over your face.

As for the camera, it packs a dual camera setup at the back with 13 MP primary lens and a 2 MP depth sensor. 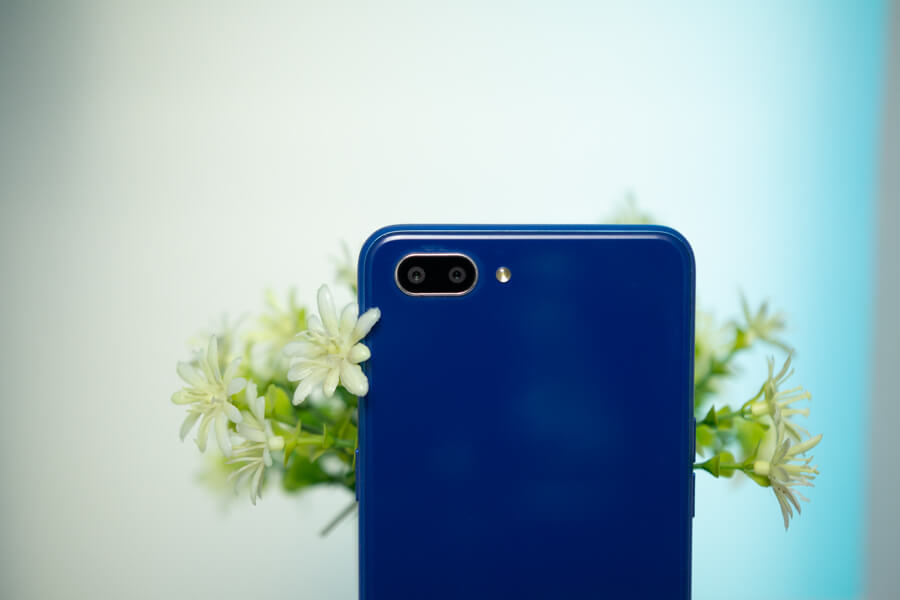 And for a budget phone, the photos actually come out great…but only in good lighting conditions. In good lighting, the colors come out close to natural, the level of exposure is balanced, and the white balance is good too. The details are there…and you won’t be complaining about the camera very often.

The portrait mode seems one of the best edge detection for the price point. The subject gets a nice focus while there is enough blur in the background.

As for low light images…well, this is the part where most budget cameras tend to struggle. And this is no exception. Images lack sharpness, and there are very less details to go on. In artificial indoor lighting, the amount of details can be acceptable, but for night shots, the photos are not usable at all.

The front camera is a single 8 MP camera. And the pictures from it are not that great. They’re actually okay, packing enough details and fairly accurate color reproduction, but not as expected. If you want a strong social media game, then, this selfie camera might not be for you. Low light selfies are also not worth mentioning anything about. And of course, there is the beauty mode which you can choose various levels of. But they look pretty aggressive. You can use up to level 3 of beauty levels, but nothing beyond that – if you take my advice.

Overall, the rear camera setup is a good one, but the selfie camera can do with some improvement.

In this department, the Realme C1 features a Snapdragon 450 chipset, which to me, looks like the de-facto processor for budget phones, i.e. if they want to be good enough. And it does not disappoint for the most part. I did get some lags every now and then while navigating through the UI, but it didn’t freeze or anything.

It also appeared as if the touch was not responsive enough, but that might have been due to the sluggishness in the UI too. And while the benchmark scores for this device show a lot of potentials, gaming on it is not exactly a “walk-in-the-park”. It is more like a tired walking kind of thing, where you rest quite frequently. What I mean is, it suffers from frequent stutters and lags.

You can play Asphalt 9 or PUBG, at low settings. And they run okay at low frame rates. But normal games like Clash of Clans, Clash Royale, Golf Battle, etc, run smooth enough, though.

With 2 GB of RAM, multitasking is also not very good. The apps won’t stay open in the background for too long, and switching between them is not seamless. And opening a lot of tabs in your browser or messenger app can take a toll on your user experience. But at the end of the day, if you’re not using the device heavily, it’ll work just fine.

Also, the phone doesn’t heat up as much. You can feel it getting hot while gaming, but it’s nothing too extreme.

The phone currently runs on Android 8.1 Oreo with ColorsOS 5.2.1 on top. And this is the same operating system as any OPPO phone in the market, which we didn’t like anyway.

The UI is one of the major shortcomings of smartphones, including its optimizations. The UI, as a whole, is a bit too colorful, and not in a good way. It isn’t pleasing to look at, and neither is the functions. Everything appears like a big mess! On top of the bad optimizations, the UI itself is a bit laggy. There’s bloatware everywhere, and of course, they aren’t useful.

Realme needs to put in a lot of work into this device…but if you’re not comparing it with other phones, or if you’ve been using other Oppo devices, you might not even care about it.

As for the storage, you get a 16 GB storage on board, which of course, is not enough. But there is a dedicated microSD card slot, with which, you can expand the memory up to 256 GB.

The battery on this device is stellar. It has a 4230 mAh battery, with which, it lasts for about 1 and a half days in normal usage. Even with heavy usage, it will easily last throughout the day.

The only problem? With a large battery and no Fast Charging, the charging time shoots up to like 4 hours! If you use a 2A / 5V charger, you can get done in 2.5 hours.

To talk about the extra features, there is not much to say though. Its speaker is fairly loud with decent, clear sound quality. And even though it has no fingerprint sensor, it’s got a pretty fast Facial Recognition. It uses the front camera for that, and not an IR sensor, but like most Oppo phones, this is good.

The Realme C1 is a good phone, no doubt. And for a price Rs. 15,500, this is one of the best contenders at this price. The battery life is phenomenal and the display is pretty great. I like cameras as well, and most of the stuff is good.

And I can’t stress this enough, but this is just the Oppo A3s but cheaper. And we were not fond of the Oppo A3s as much as this one, because of the price. That phone cost close to Rs.20000 when it launched, and now, it costs some Rs.18000. But the same phone with another name costs considerably less. So, this one looks much better.

The problem? It’s got quite the competitor. The recently launched Samsung Galaxy M10 looks like a much better performer. It’s got a better display, smaller notch, and a better look and feels, except the camera. And that, too, for Rs.2000 less.