After weeks of teasing, Realme has finally unveiled the new X7 series. The new lineup consists of two new 5G smartphones – X7 and X7 Pro. And to clear things off, the Realme X7 series is a completely new lineup and it has no connection with the previously launched Realme devices under the X-series. Let’s take a look at the specs, features, expected price, and availability of Realme X7, X7 Pro in Nepal. 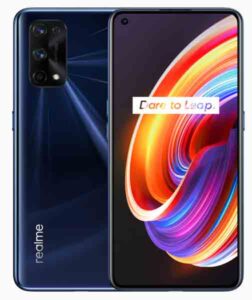 Prior to its launch, the Realme X7 Pro was teased as a light-weight flagship smartphone. The body of the phone measures 160.8 x 75.1 x 8.5mm. Similarly, it weighs around 184 grams. Realme X7 Pro sports a 6.4-inch AMOLED display with 1080 x 2400 pixels resolution. There is a circular cut-out on the top left corner of the screen to house a selfie camera. It has resulted in a 91.6% screen to body ratio. As promised, it supports a refresh rate of up to 120Hz and a touch sampling rate of 240Hz. Similarly, the display covers 100% of the DCI-P3 color gamut.

On the back, there is a rectangular module for the camera setup. It is available in three color options of which the company is promoting the C-bit variant. Unlike the other two options, it really grabs attention because of the gradient design. Similarly, C-bit color comes with double-layer coating and AG glass. However, the company’s decision to stamp the “Dare to Leap ” slogan stamped in big letters may not be liked by everyone.

Realme has decided to go with Dimensity 1000+ SoC. It is a flagship chipset from MediaTek with an integrated 5G modem. Even with the boosted clock speed of 2.6 GHz, it cannot match the performance provided by its Qualcomm counterpart. However, the use of MediaTek processors helps smartphone manufacturers to keep the price down. It comes with a Vapor Chamber-based cooling system that is said to bring down the temperature of the device by up to 10-degree Celcius. Realme has paired the Soc with up to 8GB of RAM and 256GB of internal storage. 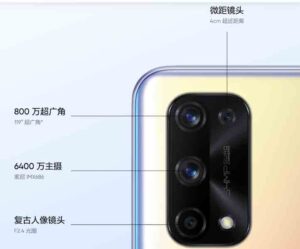 The quad-camera setup on the back of the device is led by a 64MP primary camera. It comes with an aperture of f/1.8 and offers an 80.7-degree of Field of View. Similarly, there is an 8MP ultra-wide sensor offering up to 119-degree of Field of View. A macro and a monochrome portrait lens complete the whole setup. Upfront, Realme X7 Pro has a 32MP selfie camera.

The device is backed by a 4,500mAh battery. Realme has provided support for 65W fast charging. X7 Pro features an under-display fingerprint sensor for biometrics. In terms of connectivity, the phone supports 5G, Wi-Fi 6, Bluetooth v5.1, and dual-frequency NFC.

The Super AMOLED panel has been reduced to 6.4-inch in the vanilla X7. It packs in a total of 2400 x 1080 pixels. Unlike its bigger sibling, it does not support a higher refresh rate. However, users can use the display’s 180Hz touch sampling rate for gaming. The screen covers 90.8% of the body. Like the Pro variant, the vanilla X7’s display is protected by a layer of Corning Gorilla Glass 5. It has been advertised to be 8.1mm thick. Similarly, the smartphone weighs 175 grams.

Realme X7 is powered by Dimensity 800U. It is another mobile chipset from MediaTek from an integrated 5G modem. Realme X7 features a copper heat dissipation system but it is not as fancy as the one in the Pro variant. It comes with up to 8GB of RAM and 128GB of internal storage. 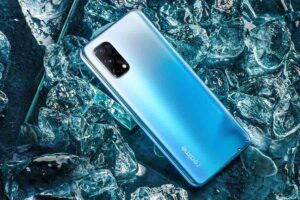 The company has made some changes to the camera setup as well. The primary camera still has a 64MP sensor but Realme has not listed its name as in the Pro variant. We believe Realme has used a different sensor on this one. Though the aperture is the same, the focal length and FOV of the two lenses are different. Similarly, the 8MP ultra-wide camera comes with a slightly smaller aperture. In addition to them, the device features a 2MP monochrome camera and a 2MP macro camera.

Realme has included a slightly smaller battery of 4,300mAh battery on the Realme X7. However, it retains the 65W (10V/6.5A) fast charging. Users will have to satisfy with the ultra-linear speaker as it doesn’t come with stereo speakers. It is Hi-Res Audio certified but misses out on Dolby Panorama Sound Effect.