Samsung unveiled three new lineups of TV as part of “The First Look 2021” event before the CES 2021. It will be promoting its new Neo QLED, Micro LED, and Lifestyle TV lineup in 2021. The company has said in its official press release that it is committed to making these new innovations more accessible and sustainable while still redefining the role of TV in consumer homes. Let us look at the 2021 lineup of Samsung TV and the company’s Going Green initiative.

Neo QLED is an all-new TV display technology that will be reserved for Samsung’s flagship 8K and 4K TVs. This innovative technology uses a new backlight material, Quantum Matrix, and Neo Quantum processors.

Samsung claims the Quantum Mini LED technology to be 1/40th the height of a traditional LED light source. It is composed of several thin micro-layer filled with densely-packed LEDs. The Quantum Matrix Technology controls the LEDs in a precise manner to prevent screen bleeding.

Likewise, the Neo Quantum Processor will come with up to 16 different neural network models. Each model uses deep learning technology for advanced upscaling techniques in upcoming flagship TVs. Similarly, Samsung claims that the processor will be available to output 4K and 8K content regardless of the quality of the input.

Samsung has also announced that the Neo QLED 8K TV will sport a new Infinity One Design with a nearly bezel-less screen. The TV will come with a Slim One Box that can be attached to the back of the TV. It will help in cable management and improve the aesthetics of the room you set it up in. Similarly, technologies like ObjectTracking Sound Pro and SpaceFit Sound will be exclusive to the 8K TV. 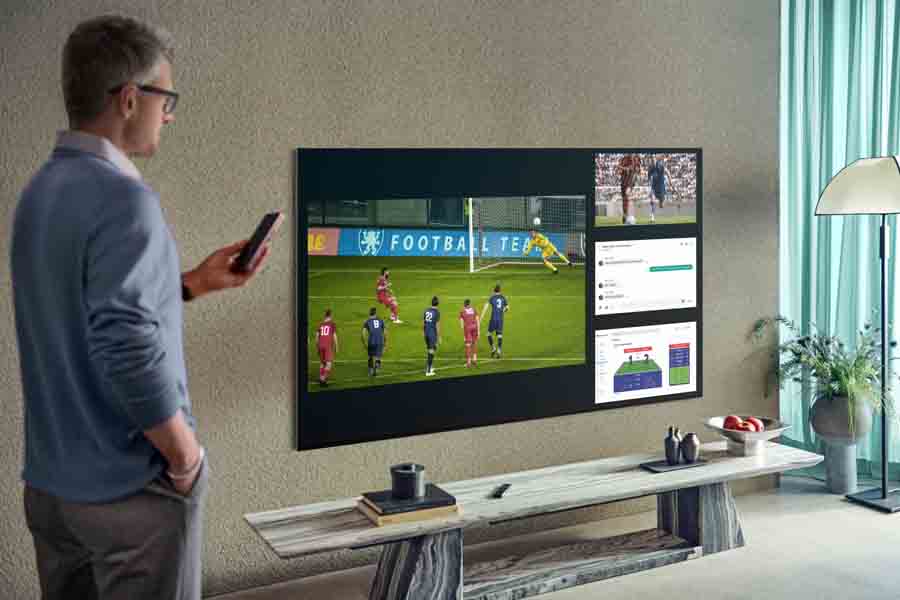 New features like Caption Moving, Sign Language Zoom, and Multi-Output Audio will be available on all the upcoming QLED and Neo QLED TV. There are features that the 8K TV will share with the 4K TV. For instance, both TVs will feature the new Smart Trainer feature under Samsung Health.

Both TVs will be able to take advantage of the Samsung Ultrawide GameView. This will allow users to game at an ultrawide ratio of 32:9 in addition to the 21:9 ratio. The Game Bar will make intelligent adjustments to improve the gaming experience like switching to an appropriate aspect ratio, connecting a headset, and monitoring input lag. The 2021 Samsung flagship TV lineup will also support AMD’s FreeSync Premium Pro for minimal shuttering during gameplay.

Samsung will launch its first commercial Micro LED TV in 2021. The company has already announced one in its home country. Prior to this, it had launched the modular TV called “The Wall” back in CES 2018 as a B2B product. 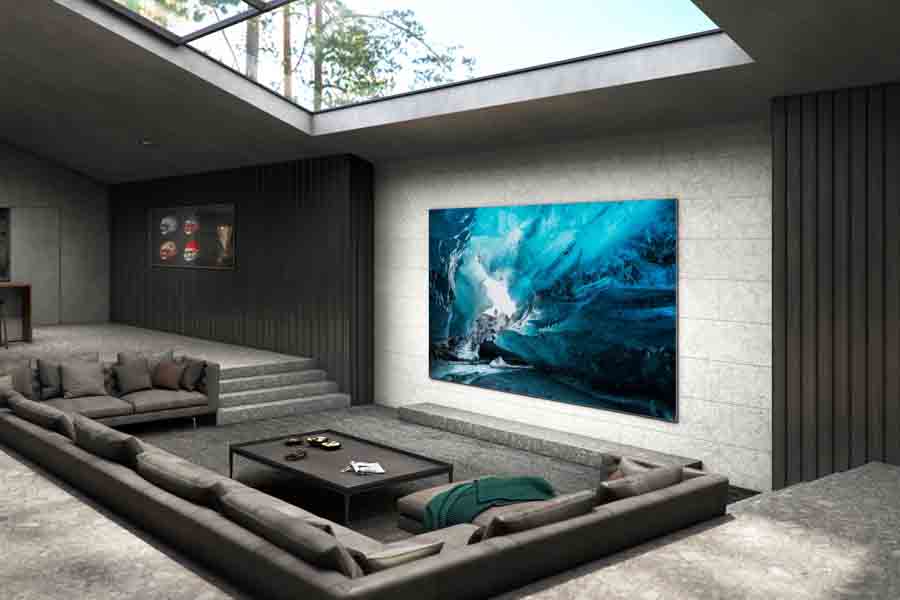 The commercial Micro LED TVs from Samsung will be available in three different display sizes – 88″, 99”, and 110”. These will make use of up to 24 million emissive micrometer-sized Micro LEDs as a backlight material. They also make use of color filters as other traditional TVs.

The upcoming Micro LED TV will have up to 99% screen to body ratio. Samsung’s 4Vue (Quad View) technology will partition the large screen into four areas with users being able to view different content on each partition. Other feature includes Majestic Sound for 5.1 sound channel.

Along with the two new TV lineup, Samsung will also be continuing its Lifestyle TV with some changes made to the TVs. The 2021 lifestyle TV lineup from Samsung will consist of The Frame, The Serif, The Sero, The Terrace, and The Premier. 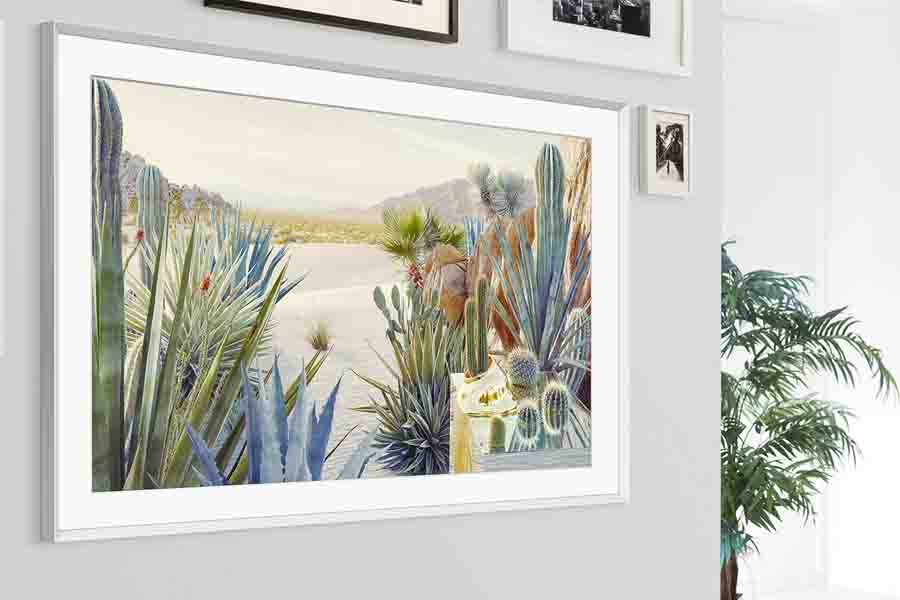 Here, the 2021 edition of the Frame will 50% slimmer than the original Frame. Its attachable bezels will be available in five distinct color options and users will be able to style it in two ways – Modern and Beveled.

As part of Samsung’s commitment to sustainable technology, the company has announced three long-term programs under the “Going Green” initiative.

To reduce its carbon footprint, Samsung will be promoting the use of recycled materials for its TV. It will also optimize its TV components to run on lower power to make its TVs more energy efficient.

Samsung will be using its Eco-packaging on the entire 2021 Lifestyle and on the majority of the 2021 Neo QLED lineup of TVs. The company plans to upcycle up to 200,000 tons of boxes each year with the use of Eco-Packaging. These boxes will also minimize the use of oil-based ink for texts and graphics.

Samsung is also planning to bring remote controls powered by solar energy. These upcoming remotes will recharge themselves from indoor light in addition to the USB charging. Samsung estimates it will prevent 99 million AAA batteries from contributing to waste over a duration of 7 years.

Are you excited about the upcoming Neo QLED  flagship TVs from Samsung? Let us know what you think of the Samsung 2021 TV lineup with your comments below.