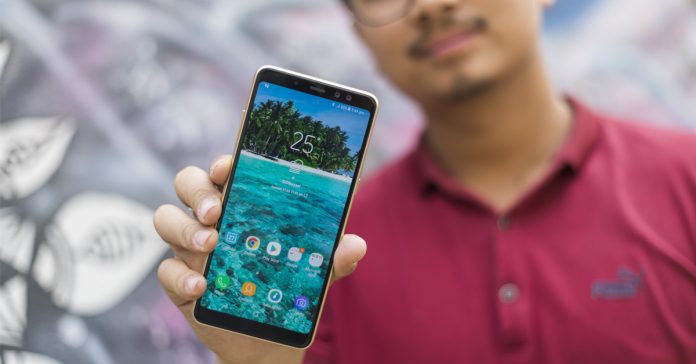 Samsung’s A series has always been in the middle of the J series and the S series with flagship grade design but average hardware specification. The newly launched Galaxy A8 Plus is here to change that with the inclusion of the 18:9 display and 6GB of RAM. However, it comes with a hefty price tag of Rs.60,000. But we all know that this is the price territory where the OnePlus has been so dominant? So let’s find out if the A8 Plus can give the OnePlus run for its money.

Samsung Galaxy A8 Plus 2018 Specifications 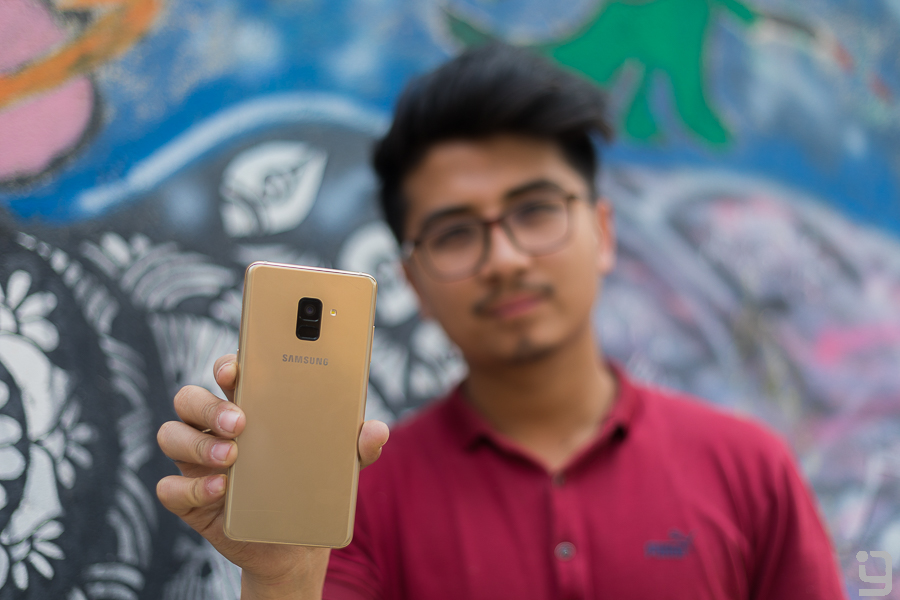 The phone on the first glance would easily fool anyone thinking it’s the Galaxy S9. And why wouldn’t it? It has got the same camera and fingerprint placement and the curved Gorilla Glass 4 back makes you think it really is. I wouldn’t hesitate to call it the S9 Lite!

Although, without the curved sides on the display it won’t quite feel like the same as S9. Upon holding the device, it is nothing short than using a high-end Samsung device or any other flagship for that matter. Not just beauty, but the phone doesn’t miss out on essentials like the IP68 water and dust resistance. 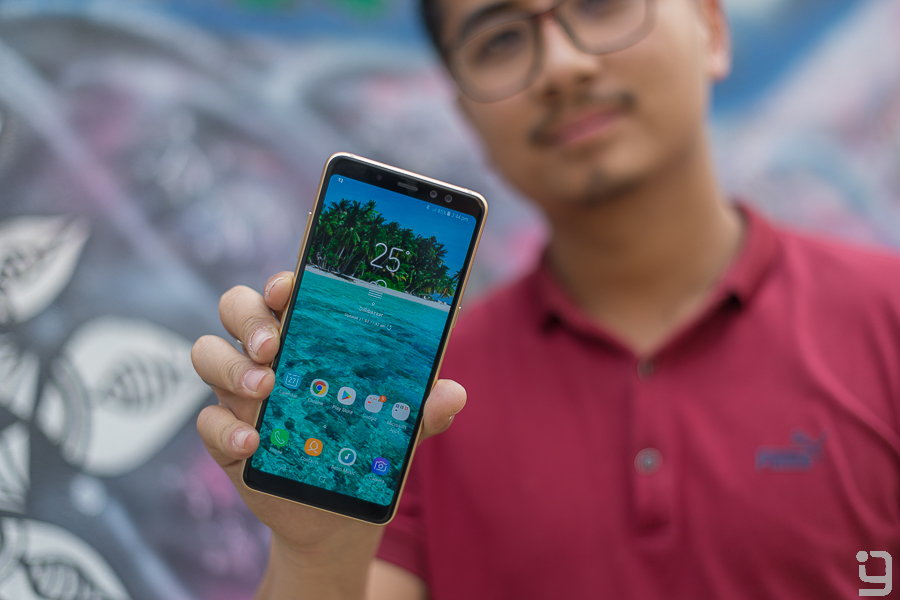 One of the standing features of the phone is its tall 6-inch 18.5:9 aspect ratio display with full HD+ resolution. Upfront it almost looks like the new S8’s or the S9’s if the top and bottom bezels weren’t that big.

Being super AMOLED, the blacks are deep and contrasts are high. You will instantly love the display with its punchy color and how fine everything looks in it. Viewing angles are great while playing games and watching movies and under direct sunlight, the display can get bright up to a healthy 590 nits for proper visibility. It is definitely no less than the display on flagship phones.

If you dive into the settings you can change display temperature and other variables to tune the display. But in my use, I had no issues watching photos and videos with the default settings.

Also, the display detects apps that are in 16:9 ratio to convert into 18:9 without any app crashes or visual errors. The addition of Blue light filter is an essential touch and I wish every phone had this feature. Unlike last year’s A-series, this year’s A8+ has a fairly powerful 7885 octa-core chipset with powerful cortex a73 cores to deliver better performance compared to last year’s 7880 with Cortex A53s. For day to day tasks, it feels fast and you won’t run into any issues.

But as you load more apps in the background, there are few noticeable hiccups like the scrolling becomes a bit jittery and app switching with double click on the recent tab becomes slow. App openings are fairly fast and the 6GB of RAM onboard keeps plenty of them in the background without having to reopen them. Although Experience UI is pretty minimal for its own good, I feel it is still responsible for the jittery scroll effect and slow app switching. 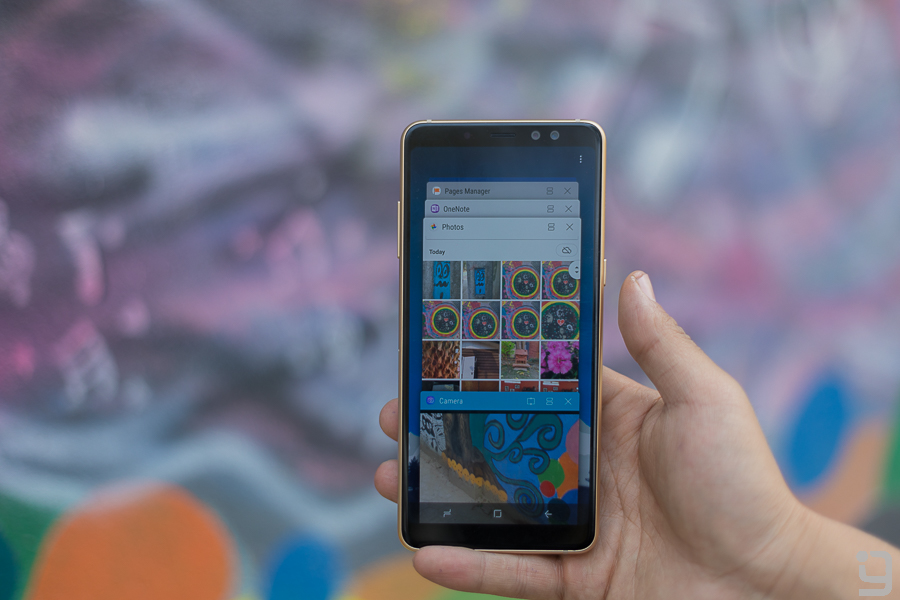 Coming to the gaming performance, the Mali G71 GPU can very well handle all the mid-tier titles on the play store. But when it comes to the high-end games, the GPU fails to deliver enough power which resulted in sluggish animation on the Asphalt 8 but the Modern Combat 5 was playable.

If performance is what you are after, then paying Rs. 60,000 could get the OnePlus 5T or the Xiaomi Mi6 (available for just Rs. 44,000 on Limited Deal) which comes with the powerful Snapdragon 835 chipset which can very well crush all the high-end games you throw at it, even the new PUBG for mobile at the highest settings.

We put both the phones (A8 Plus and 5T) through Antutu, Geekbench, and Basemark and every time the OnePlus5 outnumbered the score of A8+ by miles which also resulted in the same in real life usage.

The A8+ is running on Android 7.1.1 with a promised Oreo update on the pipeline. Samsung has promised to keep up with the regular android security patches so it will be getting scheduled Security updates on Android.

With Experience UI 8.5 has every feature that you get on the Samsung’s flagship like the S8’s. It has got Face Unlock  – although kind of slow, always on display for a quick glance at time and notifications, wallpaper and theme store, along with that cool on-screen navigation buttons. The inbuilt secure folder comes really handy that allowed to safely keep my data.

There are tiny bits of features here and there that enhances the usability even further. Like scrolling on fingerprint sensor to bring the quick toggles and notification center, gaming mode to restrict notifications while gaming, one-handed mode, cache cleaner and so on. The camera is always the most looked upon feature of the Samsung phones. And the 16MP f/1.7 camera does a good job to hold on to your expectation. It comes with phase detection autofocus but no optical image stabilization. The images it produces has a pretty good sharpness and saturation which is typical of Samsung. It offers a decent dynamic range which often brought details in the shadows. You typically won’t need to turn on the HDR mode because of this and plus the option is hidden inside the settings.

The phone does come with Pro mode but it’s an overstatement to think of it as something extraordinary as it only provides options for exposure, ISO, and white balance. It clearly lacks manual focus and shutter speed which I would have to love to have.

With wide f/1.7 aperture, it performed well on low lighted conditions. The images certainly had some grains but the details are certainly there. But the inclusion of OIS would have improved the night photography to some extent.

We put the A8+’s camera to the test against the OnePlus 5. When compared side by side, the images produced by A8 has better highlights as the objects are lit well. And typical of Samsung the subjects are well saturated but when it came to details I found the OnePlus 5 preserved more details in the images. OnePlus tends to boost of the red highlights more while the A8+ saturated the overall image in a balanced manner.

When it comes to videos, it can shoot full HD at 30fps but has no 4k recording. The video comes out with good details, contrast and is very clear. 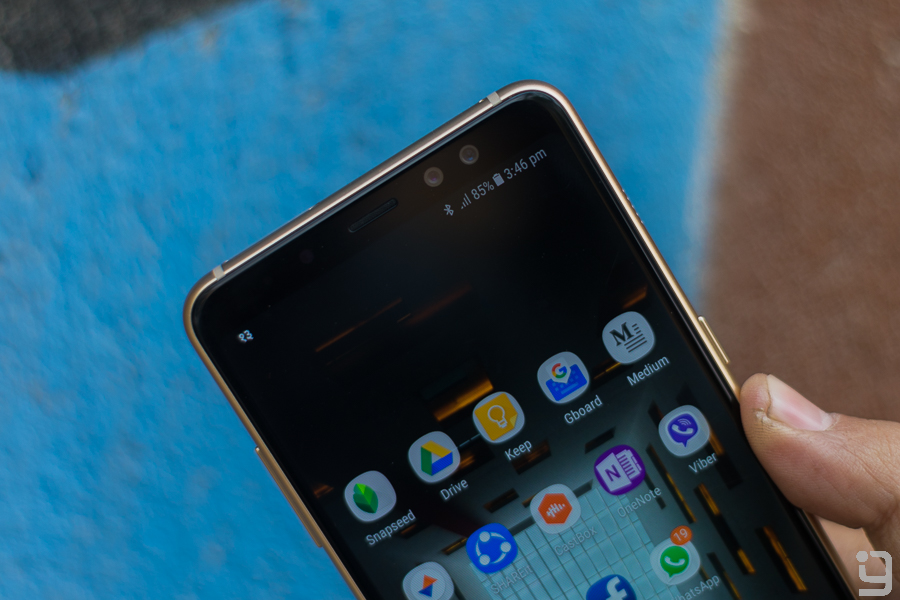 Coming to the front with the dual 16MP+8MP camera, I had very high expectations with the secondary wide-angle lens. But upon using it – it has very less field of view than what I would normally call a wide-angle.  The wide-angle camera is surely a disappointment on this device. 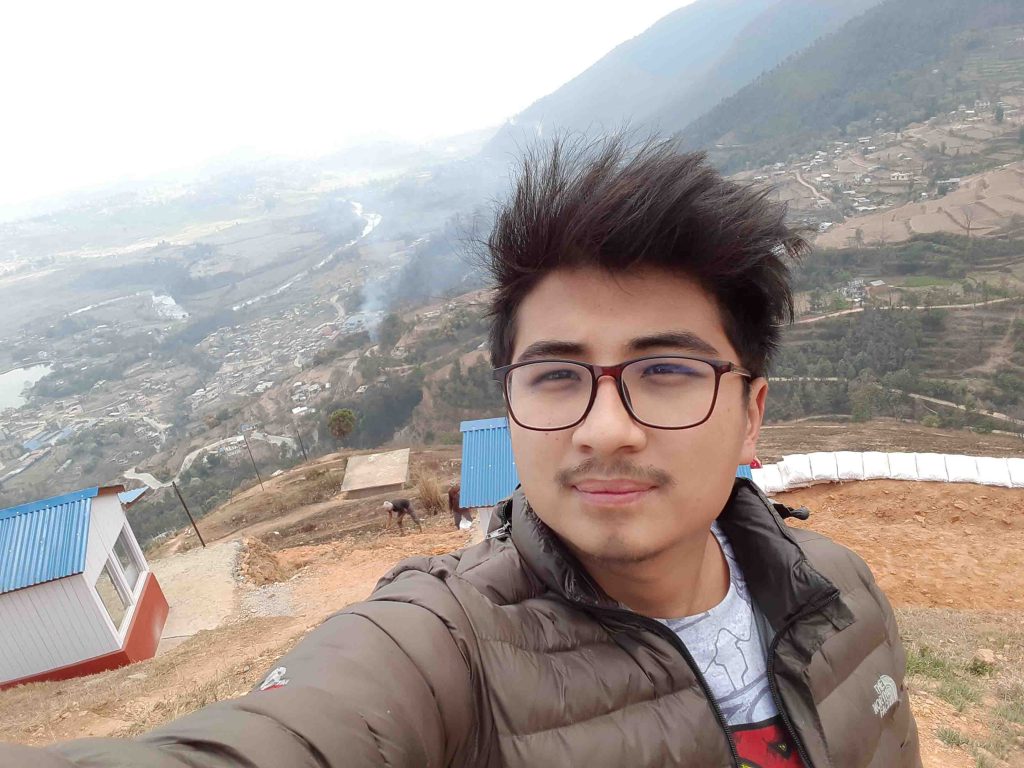 Although the images are commendable at good lighting conditions with adequate details, colors, and sharpness. Although when the beauty mode is turned off the image processing tends to smoothen the skin a bit.

Not to forget the dual lens offers live Focus Mode which will shoot bokeh images. The edge detection around the head is particularly good but other areas remain without blur or the blur moves into the subject itself. It is a hit or miss feature but when it works you definitely get quality images. 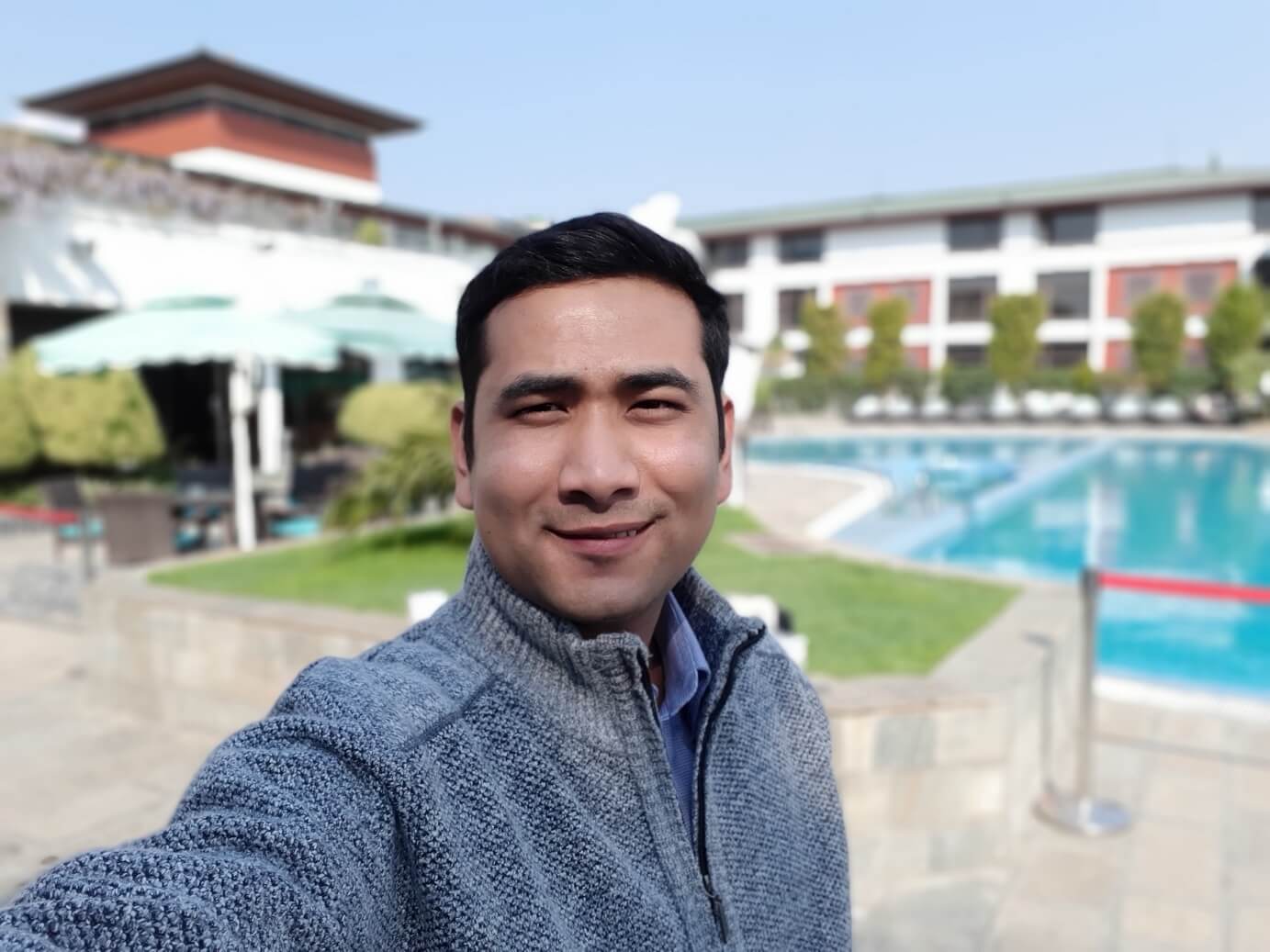 Overall you will shoot plenty sharp photos with all the three cameras on this phone without any complaints whatsoever.

The Samsung A8+ comes packing a 3500mAh battery which provides around 5 hours of screen ON time on average that will easily last you a day of moderate usage.

The plus side on the battery front is, it comes with adaptive fast charging which will charge the device up to 40% within 30 minutes and full charge within 1 and a half hours. 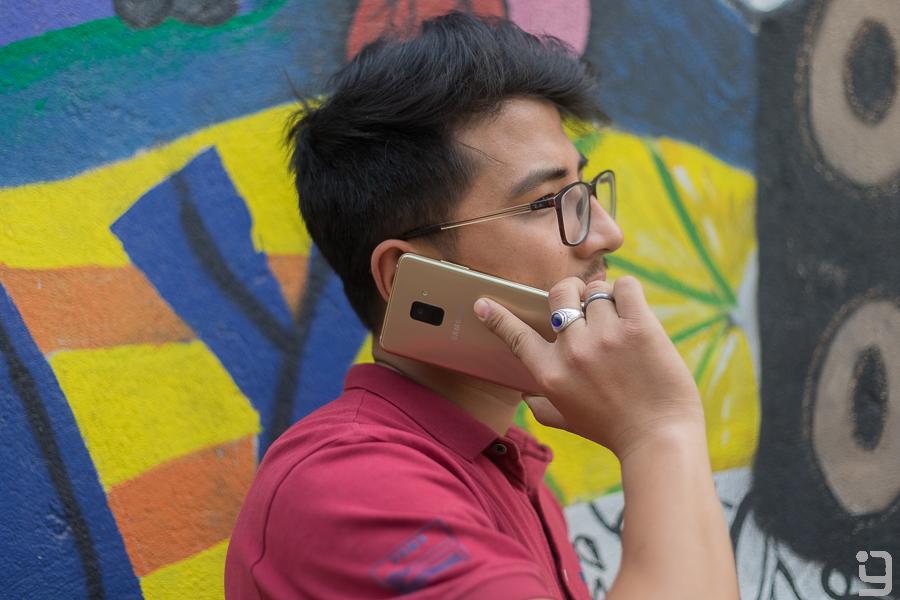 Coming to connectivity, it offers dual Nano SIM slots and both offer excellent network strength. When it comes to calling quality, the earpiece was loud enough to produce clear sound and I had no problems making calls even in a crowded environment. Talking about audio, the loudspeaker mounted on the right side is loud and the audio is crisp for listening to music and while playing games. Also, the audio output from the 3.5mm headphone jack is one of the best in this price segment. It produces one of the cleanest audio through headphones with no audio distortion and every other aspect like the bass, treble, and the mids are balanced well. In conclusion, the Galaxy A8+ is a Samsung flagship wannabe that that almost made it – if it wasn’t for its price. For 60k you get an amazing design, sharp and vibrant display, neat audio experience, good cameras and a day-long battery life, but where A8+ was outclassed by its competitors was with the performance. If you are not a heavy gamer, the A8+ is a good buy, but with the same price, you can get the OnePlus 5T that offers better processor, faster software updates, and slightly better camera performance.

Also if you have few extra cash to spare, you should definitely think about getting the S8 or even the S9.

Alternatives to Samsung Galaxy A8+ 2018: