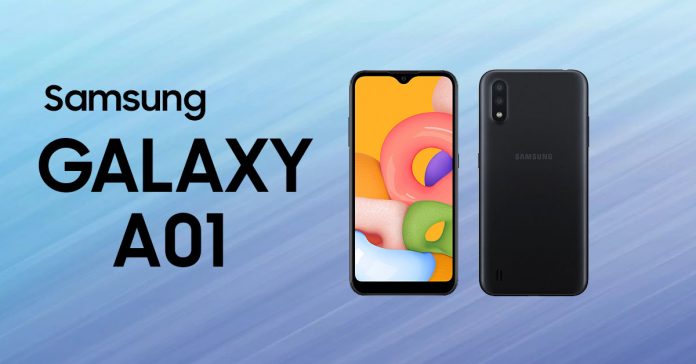 Samsung showed some signs of resurgence with the M- series and the new A-series. And in an attempt to build on that success the company has been flooding the market with new launches every other day with the latest being the Samsung Galaxy A01. The device was silently listed on the Samsung website with some details about its specs. Looking at the details that are available there is nothing to be excited about as it seems to be aimed at entry-level users. The device comes with a 5.7-inch HD+ screen. There’s a waterdrop style notch on the front that houses the front camera. Pictures from the official sites reveal a plastic body.

Samsung has decided not to disclose the chipset used in this device. As of now, we can say that it will be powered by an unspecified octa-core chip (Quad 1.95 GHz + Quad 1.45 GHz). Memory has been the most talked thing about the Samsung Galaxy A01. Initially, the official website claimed it to have 6 or 8GB of RAM. However, the device comes with 2GB of RAM. As for storage, it will come with 16GB storage onboard which can be expanded to 512GB via a dedicated microSD card slot.

It features a dual-camera setup at the back. There’s a 13MP primary sensor along with a 2MP depth sensor. The two cameras are arranged in a vertical fashion. At the front, there is a 5MP front camera for selfies.

As for the sensors, it won’t be offering a fingerprint sensor but will come equipped with a proximity sensor, a light sensor and an accelerometer sensor that is offered by almost all budget devices these days. The phone will be available in three color options: Black, Blue, and Red. It boasts a 3000 mAh battery and lacks support for fast charging.

Samsung Galaxy A01 Price and Availability

There has been no official announcement about the price or the markets where this device will be launched. However, it is expected to cost around NRs. 15,000 in Nepal and will launch in Q1 of 2020.