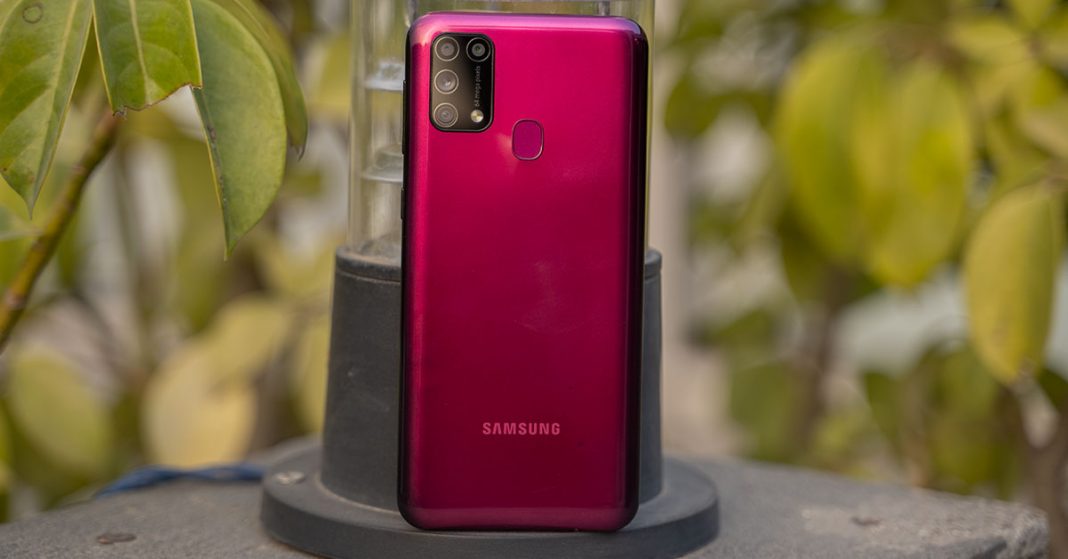 After the tremendous success of last year’s battery beast – M30s, Samsung had unveiled the Galaxy M31 in India back in February. However, its launch here in Nepal had to be postponed because of the Corona Virus outbreak and the nation-wide lockdown that followed. However, Samsung has finally unveiled the Galaxy M31 in Nepal for a competitive price tag. It is set to compete against Redmi Note 9 Pro, which just launched today as well.

Following the naming scheme of suffixing ‘1’ like in the new phones under the ‘A’ series, the Samsung Galaxy M31 shares multiple similarities with its predecessor and offers some improvements in key areas.

There really is no difference in design between the Galaxy M31 and the M30s. Both phones have a plastic frame and a polycarbonate back. The vertically oval fingerprint scanner is also present on the M31, though I hope Samsung’s done some homework in making it a tad bit faster compared to the M30s. Moreover, the only major differentiating thing between the two is that the new M31 has a wider camera module to cram in an extra sensor. Besides that, Samsung has gone on a dark route in terms of color options on the Galaxy M31.

Similarly, there’s no evolution in terms of the display either. It’s a 6.4-inches FHD+ Super AMOLED panel with the same Infinity ‘U’ cutout for the front camera. This glass panel is protected by Corning Gorilla Glass 3 and has a peak brightness of 420nits. Since it’s an AMOLED display, its vibrant, colorful and has a great contrast ratio.

Thank god, there’s some significant upgrade on the M31, ’cause I was already bored of saying how it’s identical to the M30s. Giving in to the quad-camera trend, Samsung has slapped in an additional macro lens this time around.

The primary shooter has been upgraded to a 64MP unit, which uses Samsung’s Tetracell pixel binning to give out 16MP photos. Besides that, there’s an 8MP ultra-wide sensor, a 5MP depth sensor, and finally a 5MP macro lens. The cameras are arranged inside an upside-down ‘L’ shaped arrangement.

Coming to the front, there’s a single selfie camera, which has been upgraded to a 32MP lens that can also shoot 4K and slow-mo videos.

In terms of performance, the Galaxy M31’s got the same old Exynos 9611 chipset as its older brother. Why am I surprised? Expecting a decent SoC in a budget/mid-range phone from Samsung is basically like expecting Mercury to go in retrograde; it’s very rare. While brands like Realme & Xiaomi are pumping out budget and mid-range devices with extremely powerful chipsets, Samsung is still sticking to the strategy of:

In terms of memory, it’s been realized that 3/4GB of RAM is no longer sufficient for a 2020 phone. Recognizing that, Samsung has gone with 6 or 8GB of RAM on the Galaxy M31. Moreover, in Nepal, there’s only the 128GB of UFS 2.1 storage variant available, which can be expanded using a microSD card. The phone runs on One UI 2.0 based on Android 10 out-of-the-box.

Moreover, the Galaxy M31 is also Widevine L1 certified for playing HD content on the web. Adding to an immersive entertainment experience is the Dolby Atmos 360º surround-sound speaker.

Well, they don’t call it the “#MegaMonster” for nothing, now do they? Like how the M30s absolutely swiped the floor with its tremendous 6000mAh battery, the legacy continues with the Galaxy M31. I sure am happy to see the same caliber battery here, but can’t help but wish there was some improvement in terms of its charging.

In our review of the M30s, the phone already proved to be a two-day phone, which is great; no complaints there. But it took almost 2 and a half hours to take it to full charge from nil. That’s too long, ain’t it? Well, Samsung clearly doesn’t think so, as the M31 comes bearing the same 15W charging capability. That’s entirely an SoC-constraint because the Exynos 9611 only supports Adaptive Fast Charging (15W).

There is a slight price difference between the Galaxy M31 in Nepal and India. This is because the phone will be released in offline stores in Nepal, whereas M31 is available exclusively online in India.