Home Reviews Samsung Galaxy A23 Review: This Ain’t It, Chief We’re into the second quarter of 2022 and Samsung has already launched a bunch of smartphones ranging from budget to the flagship category. Some of the 2022 refreshes so far have been fairly impressive like the Galaxy A53 and even the A33 to some extent. We’ve already published our early impressions of both these phones, by the way. And today, I’m here with my full review of the Samsung Galaxy A23.

But even without anyone’s proper review, you could probably tell that the Samsung Galaxy A23 is not a good phone for the price. Samsung has never been price-competitive with its non-flagship devices but this one just takes the cake—mostly because it belongs to the ‘A’ series. In case you didn’t know, the Galaxy ‘A’ series is home to the company’s sub-flagship smartphones and they are naturally priced a bit on the higher end. Therefore, while the more expensive entries in this lineup can get pretty impressive overall, the cheaper ones don’t share the same fate.

Take last year’s Galaxy A22 4G for example. It was almost identical to Galaxy F22, but the A22 was a little too expensive simply because it’s an ‘A’ series phone with a couple of “standout” features like OIS-ready primary camera and slim build quality.

Unfortunately, 2022’s Galaxy A23 does nothing to break that sad tradition. At NPR 31,999 here in Nepal or INR 19,499 in India for the 6/128GB variant, this is easily one of the most overpriced phones in its price bracket right now. I mean… there are so many better alternatives available that I find it to be an entirely unnecessary product.

Even Samsung’s own Galaxy F23 5G looks like a much superior phone while being a couple of bucks cheaper! The one aspect where the A23 might seem like the better of the two—at least on paper—is the cameras. But when I compared the camera system of these two phones, I found that the F23 delivers better results in most cases.

Starting with the normal daytime shots, the F23 captures sharper images with much better color processing in almost every instance.

It’s the same with ultra-wide shots as well. Although its 5MP sensor surprisingly delivers similar details as F23’s 8MP ultrawide camera, the overall image looks much more pleasing from the F23.

As for portraits, I’m more fond of how the F23 handles background bokeh too.

Skin tone looks a bit washed out from the Galaxy A23 with a hint of reddish tint—whereas the F23’s slightly warmer color does look somewhat better.

But when it comes to selfies, there’s no clear winner between these phones.

Sometimes the A23 takes better selfies with nicer skin tone, while the F23 captures more pleasant images with better sharpness and dynamic range in some cases.

Then again, Galaxy A23’s OIS does come in handy under low-light conditions. As you can see, the phone captures sharper nighttime images with noticeably less noise in most cases.

When turning on Night Mode, the F23 turns up exposure to some degree but they’re relatively grainier in comparison.

In terms of videos, Samsung’s official product page for the Galaxy A23 mentions that the phone can record at up to 4K 30 fps. But there’s no 4K recording option in our unit, whereas we also know that the Snapdragon 680 caps out at 1080p 60fps videos. So… it’s most likely a typo on Samsung’s part. Or maybe 4K recording is arriving with a future update somehow—I can’t really tell.

As of now, the A23 can’t record beyond 1080p 30 fps, where the video comes off too wobbly compared to the F23. To make matters worse, the F23 also has “Super Steady Mode” for even steadier videos.

Upfront, both phones max out at 1080p 30 fps selfie videos and I’ll just… let the samples speak for themselves. Subjects have this really eerie skin tone from both phones even though Galaxy F23 crops in on the frame for somewhat stable results.

Next up, the Galaxy A23 disappoints in the display department as well. While its predecessor featured a 90Hz Super AMOLED screen, this one has a 90Hz TFT LCD panel for some reason.

Yes, Samsung has bumped the resolution from HD to Full HD this time, but… that’s nothing!

Other brands have been offering a 120Hz FHD Super AMOLED display in this price category since last year—that too with a modern hole-punch cutout instead of a teardrop notch. And seeing Samsung—of all smartphone makers—stoop this low is honestly quite embarrassing. Anyway, the Galaxy A23’s screen looks as dull as you’d expect. Its narrow color gamut means contents don’t look nearly as vibrant or lively as they would on an OLED panel. And I’m not sure if it’s exclusively because of the TFT panel but the way Samsung’s blue light filter is implemented on this phone looks pretty unnatural—especially under dark mode.

As someone who prefers using this feature all day long, it’s fair to say that the A23’s display hasn’t exactly been a feast for my eyes.

I’ve thoroughly struggled with outdoor visibility on this thing as well since it simply can’t get bright enough under harsh lighting conditions. Another thing, its viewing angle isn’t the widest either and the A23 easily has one of the worst cases of grayscale inversion I’ve come across in a smartphone recently. It’s like it has a pre-applied privacy screen protector, but one that doesn’t really work.

At least there’s a proper Gorilla Glass 5 protection here, so that’s… something I guess. Samsung has optimized the adaptive 90Hz refresh rate on the A23 quite aggressively well, so there’s that too. And it’s Widevine L1 certified, which means you can enjoy high-res streaming on Netflix and Prime Video without any trouble.

Adding to the media consumption experience is a single down-firing speaker. While it can get fairly loud enough, a mono speaker for a phone at this price is clearly not right. As a result, listening to anything with a wide soundstage is not an enjoyable experience here, whereas it also sounds a bit shrill and distorted at full volume. 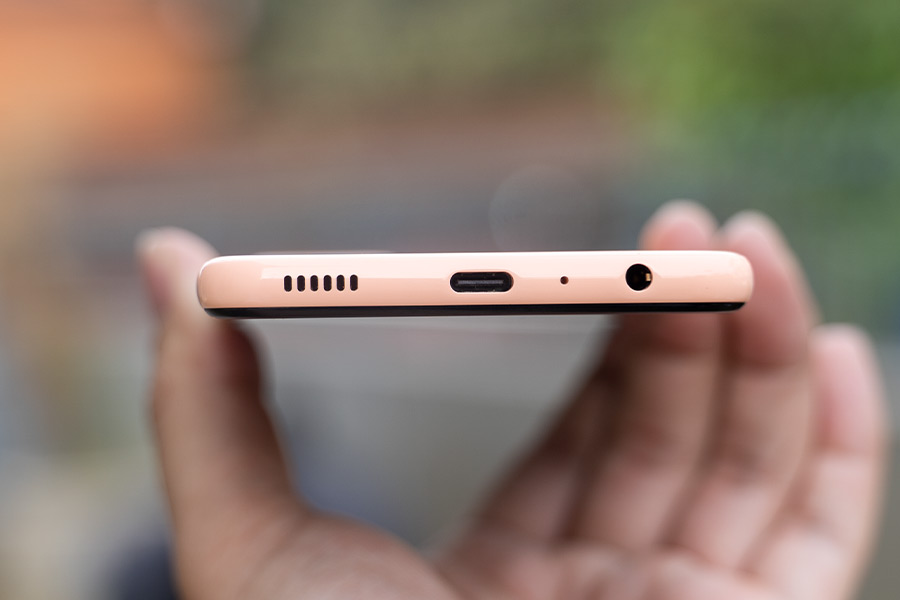 Oh, and its Dolby Atmos audio only works with wireless earbuds, stereo headsets, and Bluetooth speakers by the way. And its soft, buzzy haptics is equally underwhelming, to say the least.

On to performance, Samsung has used Snapdragon 680 in the Galaxy A23—the same chip we saw on the Redmi Note 11 and the Realme 9i. So, we already have a good idea about what to expect here.

I’m using the base 4/64GB variant of the phone and it has handled most of my regular everyday chores quite alright. It’s just that 4GB of RAM isn’t enough to deliver efficient multitasking on the full-fledged One UI 4.1 that it’s running so you will encounter a few stutters here and there. 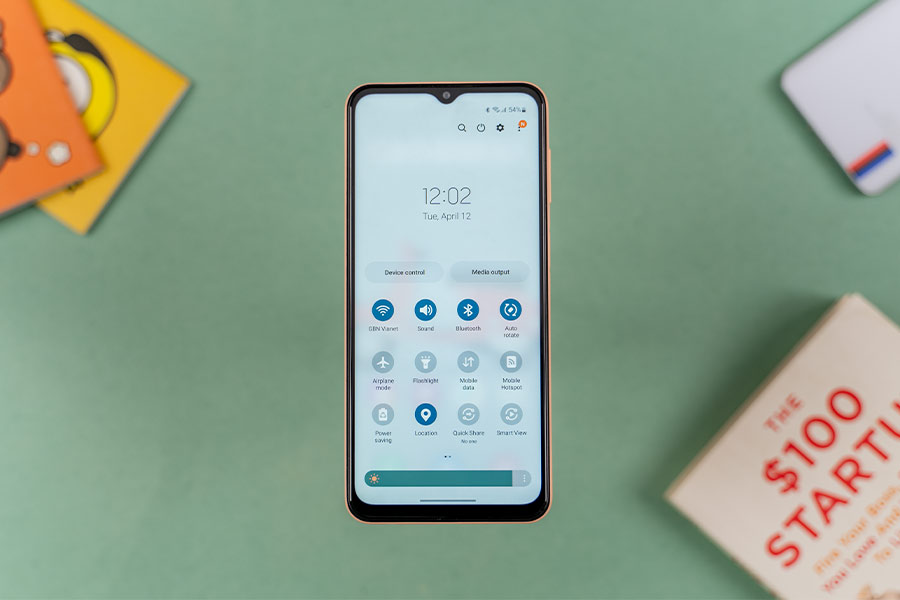 Based on Android 12, this Android skin is an absolute delight to use though. From its excellent optimization to all the available customization options, the software of things is pretty solid on the A23.

As for gaming, the Galaxy A23 maxes out at just Smooth graphics and High frame rate on PUBG Mobile. Under this, the phone manages a fairly stable 30 fps with minor frame drops every now and then. You can push it to Balanced graphics and Medium frame rates but the overall gameplay is noticeably worse under these settings.

Likewise, COD Mobile maxes out at Low graphics and High frame rates where the A23 swings between 40-50 fps in general, but the game dips to as low as 28 fps sometimes. I noticed the phone getting mildly warm next to the camera module after 6-8 minutes into the game as well. Relatively less demanding titles like Mobile Legends give a pretty smooth 60 fps gameplay alongside cooler temperatures though. Samsung has also optimized the Galaxy A23 to run high-fps games like Mech Arena and Injustice 2. But because of such an under-powerful processor, the phone doesn’t hit the 90 fps mark in either game—and hovers around 60-70 fps instead.

Moving on, Samsung has tried to emulate a premium design on the A23. Everything from its camera module to the color options is similar to the rest of the ‘A’ series phones this year. But while the Galaxy A33 5G has a matte back and matte frames, this one’s glossy all over. Needless to say, it invites fingerprint smudges way too easily. 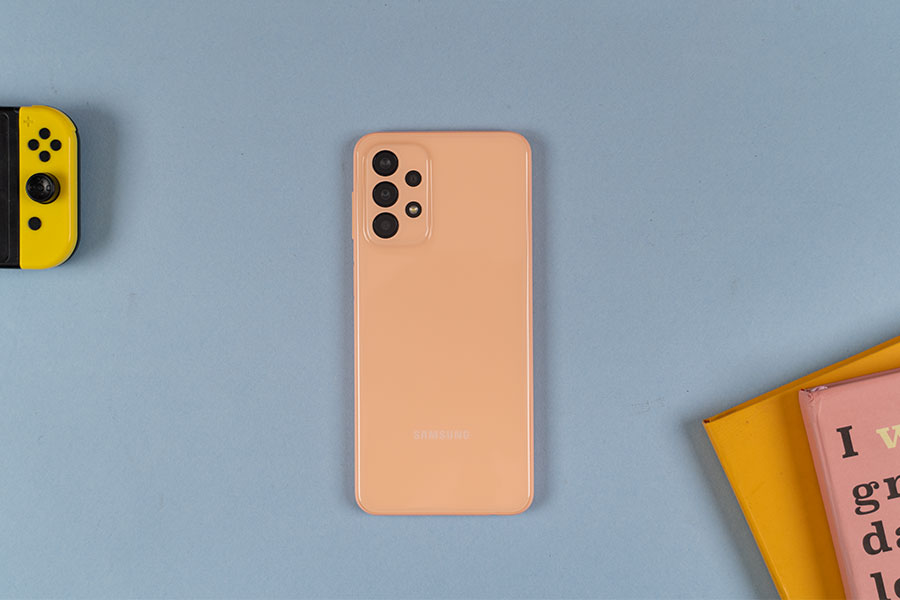 And unlike the higher-end models, there’s no IP certification of any sort here, whereas its SIM tray also stays without a protective rubber gasket. Still and all, the phone is pretty well-built with the right amount of heft. The weight distribution could’ve been more even, but it wasn’t that big a deal to me. For biometrics, there’s a fingerprint reader mounted into the power button on the side which is admirably fast enough.

Finally, the battery life on this thing is great. Samsung says this is a 2-day battery phone and that’s 100% true. Under medium to heavy usage consisting of browsing social media apps, gaming, and even running some power-hungry benchmarks, I was getting 7-8 hours of screen on time on average.

Just take a look at this PCMark battery endurance benchmark! On the other hand, the phone supports up to 25W fast charging although you only get a 15W power brick inside the box. When using a compatible 25W charger, I was able to fuel its 5000mAh battery from 1 to 100% in around 1 hour and 20 minutes.

Okay, so let’s wrap up this review. Like I spoiled it at the very beginning, the Galaxy A23 is a… travesty. I guess you can argue that it has a few notable qualities like the attractive design, optimized software, and solid battery life, but they are heavily outweighed by the overall value of the phone in regards to its price.

If you want a well-rounded phone in general, then the Redmi Note 11S and Realme’s Narzo 50 are a couple of great options in Nepal. And in the Indian market, the POCO X4 Pro 5G, Galaxy F23, Moto G71, and Realme 9 SE all offer a much better value than the Galaxy A23. 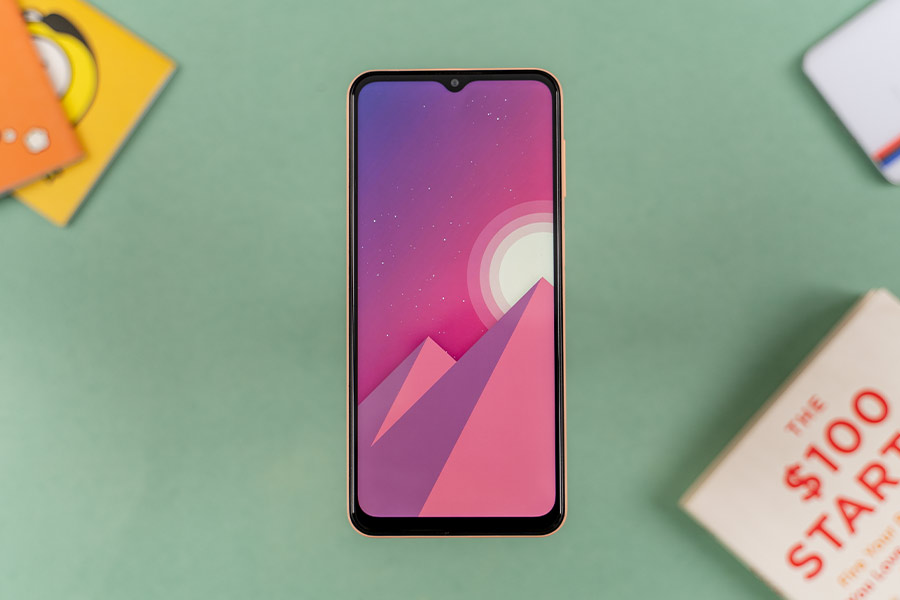 What I’m trying to say is there’s simply no justifying this travesty of a phone. Maybe Samsung already has a cheaper ‘M’ or ‘F’ series rebrand ready for the A23. But even then I doubt it’ll be able to match the competition with its price-to-performance ratio.