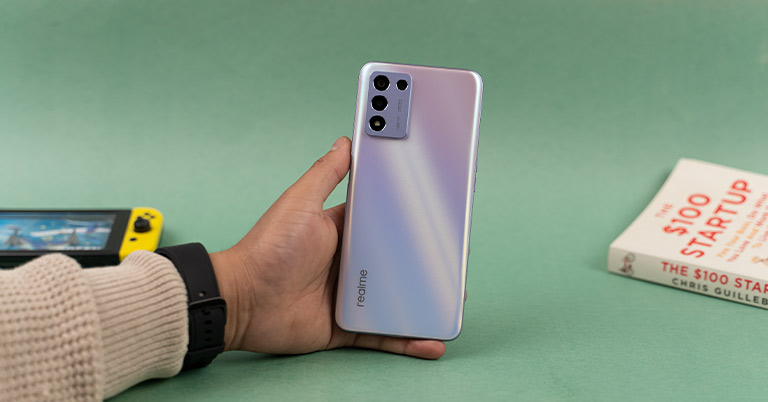 Realme’s number series has long been regarded as one of the best budget all-arounder phones. However, the Realme 9 Speed Edition aka 9 SE that I have with me is completely a different beast. As the suffix “Speed” hints, the 9 SE is aimed at people who place a premium on raw performance above everything else. So, is this the gaming phone to consider in this price range? Let’s find out in this review of the Realme 9 5G Speed Edition.

So, without deviating from the topic at hand, let’s talk about performance. Powering the Realme 9 SE is a Qualcomm Snapdragon 778G chipset, which if you remember, was also present on last year’s iQOO Z5 and Samsung Galaxy A52s. Despite being year-old mobile silicon, it has all the performance prowess to stay up with the industry standard in 2022. To put that into perspective, it boasts four flagship-grade Cortex-A78 cores and four Cortex-A55 cores while being energy-efficient—thanks to its 6 nm process node.

As a result, the phone shows no sign of distress on our everyday chores and we’ve no complaints about its memory management either. Complementing this is an 144Hz refresh rate screen with a 240Hz touch sampling rate. So everything from UI transitions to using apps like Chrome or Instagram is ridiculously fast and smooth.

By the way, we have the 8GB RAM and 128GB storage variant of the 9 SE, while Realme also offers a 6/128GB option for the phone. The phone also enjoys virtual RAM expansion up to 5GB. However, it’s as clear as crystal that it has very little bearing on the phone’s overall performance.

But, something that really knocked our socks off is how well Realme has optimized 9 SE for gaming. I mean, even the most resource-intensive game, Genshin Impact is playable at its highest settings, with motion blur turned off and the frame rate set to 60fps.

As you can see in this graph, the phone offers smooth gameplay in Genshin Impact with 99% FPS stability in the aforementioned setting—though we averaged about 41 fps here. More than the FPS count, the stability is what really matters in any game, and this thing is definitely a stable performer.

Furthermore, it also shows how good mid-range SoCs can be when properly optimized. Things are looking up for the device on the thermal front too. It does grow warm around the camera module after around 15-20 minutes of Genshin Impact, but not to the point of any discomfort.

Similarly, after 20 minutes or so in the game, I graphed its CPU and battery temperature at 50ºC and 46ºC, respectively. That’s a bit higher than usual. Yet, we’ve seen devices crossing the 50ºC mark or even 60ºC, so it’s not something that I am going to exaggerate here.

All told, This is a class-leading performance from Realme 9 SE.

Comparatively less demanding titles like Call of Duty Mobile run extremely well at their max setting. I set the graphics to Very High and frame rate to Max, and under this, the gameplay was buttery smooth. Similarly, PUBG Mobile plays seamlessly at HDR graphics and Ultra frame rate settings with little to no stutter.

However, I still have one complaint which is, why Realme hasn’t enabled 120fps gameplay in most of the supported games. I tried playing Oddmar and Bomb Squad, and they both cap out at just 60fps.

Amidst this review, I also ran a few benchmarks tests, and as expected it performed admirably in those areas too.

Having said that, the most disappointing thing here is that it still boots on last year’s Android 11. To be honest, I’m a bit surprised by Realme’s decision in this regard, given that the recently launched 9 Pro+ and even 9 Pro come pre-installed with the latest Android 12.

On the other hand, the company has already begun to roll out Realme UI 3 based on Android 12 on last year’s Realme 8. So I’m not sure about this prejudice for the 9 SE, but I hope the company is planning to push an update sometime soon.

Anyways, besides sheer performance, another thing that’s really commendable about this phone is the design. I am not really a fan of the flashy-looking phone in general but just look at this Starry Glow shade that I have with me. Looks premium and not overly expressive—at least for me. This color has grown on me over time for some reason. 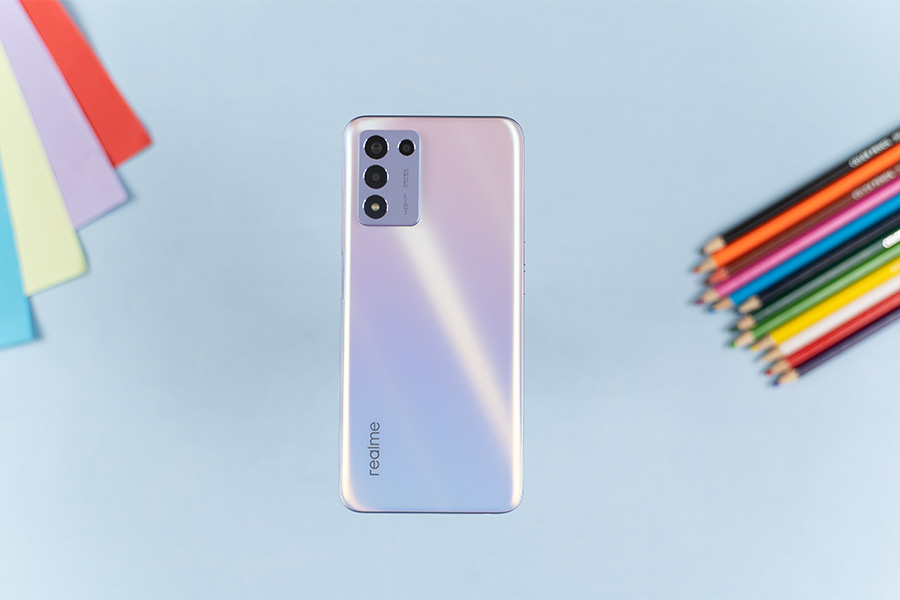 Plus, the back has a matte finish, which makes life much easier for people like me who don’t want to wrap their phone around the case for obvious cause. The only thing that might be of concern is that the camera island is a bit thick causing the phone to wobble when placed on a level surface.

Keeping it aside, the hands-on feel of this thing is also pretty premium. With 199 grams of weight, it’s slightly on the heavier side, but you will get used to it after just a few days of use—thanks to its ergonomic design. For biometrics, there’s a fingerprint scanner on the side that kicks in quite fast to unlock the phone.

Getting on to the front, you’re greeted with a 6.6-inch screen with FHD+ resolution. Now, it’s not an AMOLED panel, however, I totally get the rationale for adding in a higher 144Hz refresh rate screen on a performance-oriented device. So, as I said before, every task you perform here feels fairly fluid. Talking about the core quality, well for an IPS screen it has decent colors and contrast. There’s no HDR certification or anything of that sort here, so HDR playback is not available on major streaming platforms including Netflix and Prime Video. Still, you can watch FHD content, thanks to the Widevine L1 certification.

Moreover, the brightness on this thing is capped out at just 600nits. Although the visibility is plenty sufficient on gloomy days, it does struggle to maintain sufficient illumination when you’re under direct sunlight.

Another thing that feels missing here is the absence of a stereo speaker setup. Xiaomi has been democratizing stereo speakers in the mid-range and even the budget segment for quite some time now. And, we expect other brands to follow the suit. 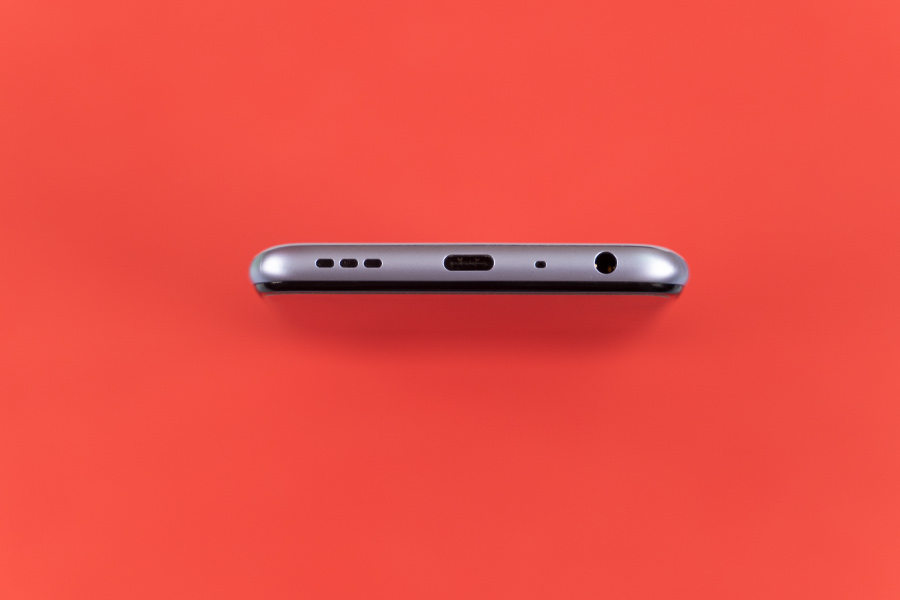 As a result, I’ve definitely missed the stereo effect and immersive-ness from this mono speaker. Yet, it can get plenty loud for your casual multimedia consumption. For consolation, you get a 3.5mm headphone jack in here though.

Alright, let’s get into the camera section of this review. Realme 9 SE features a triple camera setup at the back led by a 48MP primary sensor. However, the other two sensors—like most budget and mid-range phones—are the 2MP gimmicky depth and macro lenses. Unfortunately, it also misses out on a dedicated ultra-wide sensor. For selfies, there’s a 16MP sensor on the punch-hole cutout at the front.

Starting with the normal images, as is customary with most of the Realme phones, the 9 SE’s primary sensor delivers photos with a pop in colors. However, Realme adds a bit of sharpness to compensate for the loss of details.

I also compared its cameras with the Realme 9 Pro, and as you can see, its photos are somewhat on cooler side. And, weirdly enough, the HDR processing on the 9 Pro fails to balance the highlights and shadows in some cases.

On the other hand, portraits come out saturated with a warm skin tone from the Realme 9 Pro while 9 SE’s images are a bit sharpened. The subject focus and edge detection are similar in both handsets though.

Turning on the night mode helps to brighten the image and maintain exposure quite well. Regardless, the photos from the 9 Pro appear a bit saturated.

Likewise, selfie videos cap out at [email protected] and you can get steady results from the 9 SE with ultra steady mode turned on—although it does come at an expense of a narrower field of view.

Nonetheless, the battery life on Realme 9 SE is pretty good. You get a 5000mAh battery in here that offers 7-8 hours of screen time on my typical usage. Usually, the phone would still retain 15-20% battery on average when I’d get home by 8 PM. 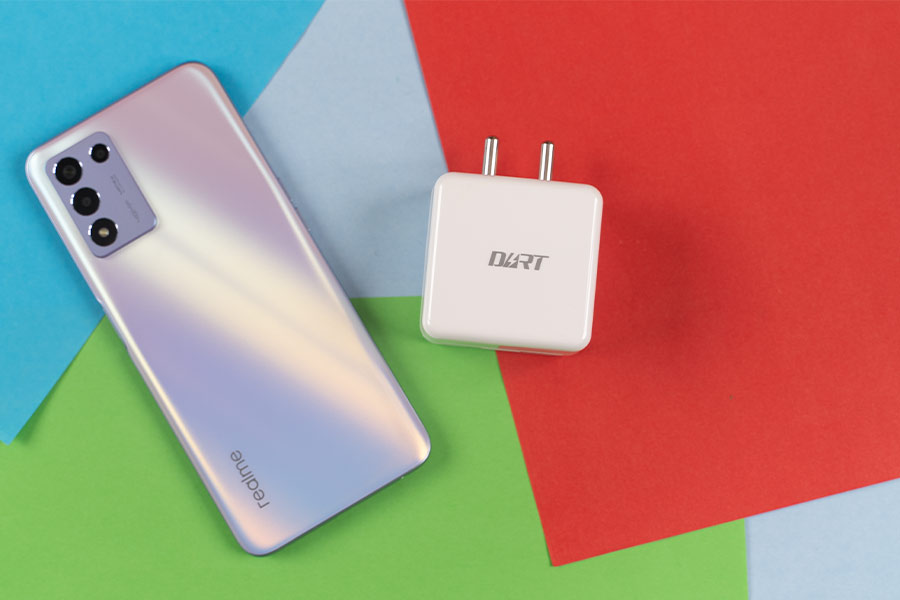 I mostly use the phone with the refresh rate set to Auto, however, using 144Hz all the time results in a somewhat lower screen on time. Likewise, charging the phone from the in-box 30W charger takes around an hour.

Okay, time to wrap up this review of the Realme 9 Speed Edition. As I said in the intro, is this the gaming phone to get in this price range? Non-arguably the answer is Yes! We are thrilled by the level of optimization Realme has done on their end to deliver such an incredible performance. Having said that, this is by no means an all-arounder device. For a more standard workload—think music streaming, taking photographs, or texting—a more well-rounded option like the Redmi Note 11 Pro Plus would be a better bet for most.