So, there are a lot of mid-rangers competing for the first position, each of them having their strengths and weaknesses. Two of the most prominent players in the smartphone business, Samsung and Huawei have put forward their contenders, the Samsung Galaxy A50 and the Huawei P30 Lite for pretty similar pricing. In this article, we will be performing an ultimate mid-range battle between Samsung Galaxy A50 VS Huawei P30 Lite in all the aspects. And we will try to find out which one is the better deal among these two! Let’s start things off with the design. And this has been a difficult choice. While the A50 rocks a glasstic design, the P30 Lite has taken the plastic approach. And to be honest, both do look good. What the P30 Lite does better it is, how compact and easy-going it is. On the other hand, A50 feels better on the hands and has a bit more heft to it than the P30 Lite. Similarly, the A50 is a bit wider when felt on the hands.

Going by the looks, the P30 Lite looks a bit more appealing because of its gradient design. And even though it’s plastic, it almost looks as though it’s glass. So, I would go for the P30 Lite design. 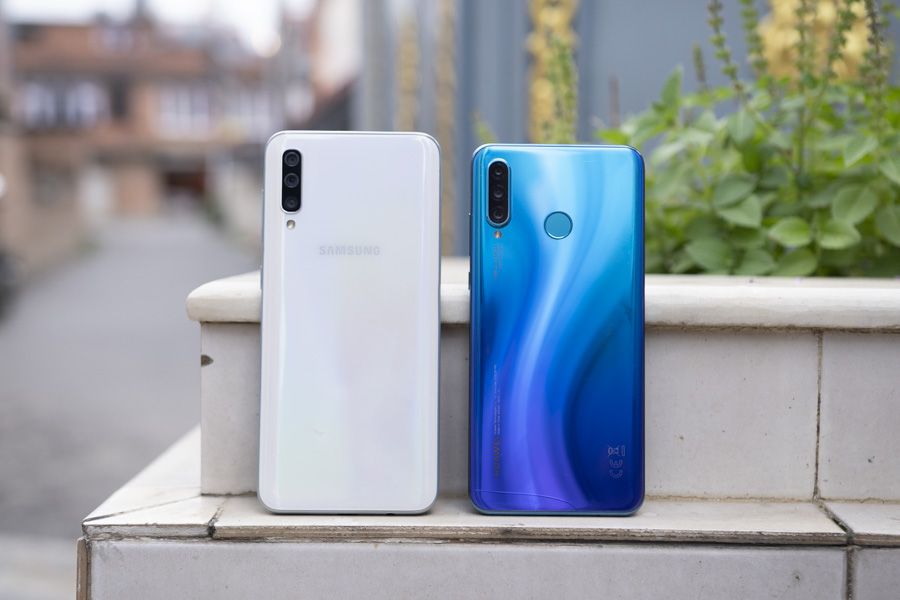 I have used these phones for quite a time now and minor scratches have appeared on the P30 Lite while the A50 seems a bit more resistant to scratches. But overall, I must say, it’s very hard to pick one among these two; both have fared well on my tests. But, because of the ergonomic design and appealing colors, I will choose the P30 Lite as the winner. 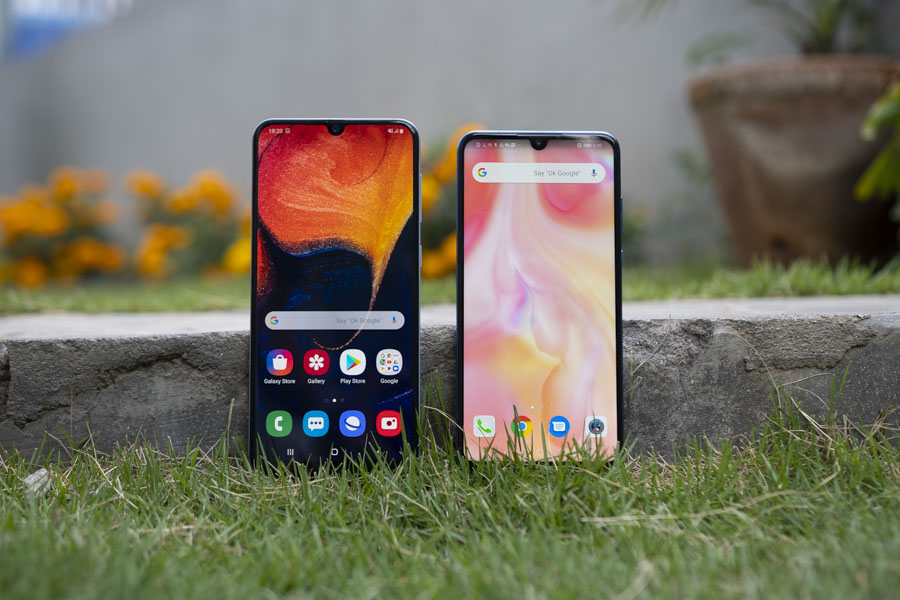 When it comes to the display, there is pretty much no debate. The Galaxy A50 sports a 6.4- inch Super AMOLED display while the P30 Lite has a 6.15- inch IPS LCD Display. And in terms of quality, the A50 gets the cake here. The display is huge and seems aimed at multimedia consumers. The P30 Lite, however, isn’t that far behind though! The IPS panel is sharp and vibrant and though it does not match the deep blacks of the Super AMOLED, you can’t call it bad! Both of these phones have a U-shaped notch with a single camera up top.  And both look good, they are small and don’t hinder usage or media consumption, so, I don’t have a personal favorite here. But the bezels on the Galaxy A50 seem a bit more pronounced than the P30 Lite which you can notice right away. But all these are matters of preferences.

So, for the deep AMOLED blacks, I would go for the A50 despite the slightly pronounced bezels.

While testing both these cameras, the first thing in noticed was, both of them are not color accurate. Both of them have this extra punch to the pictures they produce and they are different in their own ways. It is kinda hard comparing both. So, let’s start with the details. Comparing both, I found the details to be slightly better on the Huawei P30 Lite. Not that A50 misses out on details, but P30 Lite’s pictures are a bit sharper. Maybe it’s the P30 Lite’s inbound photo sharpening mechanism, but it produces better details than its counterpart.

Coming to saturation, as already mentioned, both of them give you over saturated images. But if you look at these two images, the A50’s image is more saturated.

Some might find it appealing but I liked P30 Lite’s saturation levels better. You can check out this image of the building here for some more reference.

Now, photos of human subjects seem better on the A50, because it gives a good texture on the skin. Similarly, portrait images also look better from the A50’s cameras with good levels of background blurring. Edge detection, on the other hand, is not good at both. However, in portrait images, colors seem lively on the P30 Lite. But, because of better background blurring, I will go for A50 in terms of portraits.

Selfies too appear better on the A50 because of punchy colors. Check out these selfies from the P30 Lite and the A50!

So, judging overall, the P30 Lite takes the cake in the camera department albeit by a small margin.

Talking of performance, the A50 is powered by the Exynos 9610 chipset while the P30 Lite gets the Kirin 710. And comparing the benchmark scores, the A50 is better by a good margin. But in real life usage, both fare well. Regular usage and multitasking are smooth on both. You will not feel any lags or stutters of any kind when it comes to regular use.

However, gaming on the A50 is slightly better. You can play PUBG on high settings as well with some stutters here and there. In the P30 Lite, however, you can play PUBG at medium settings at max which runs pretty good though. Small to mid-tier games do run well on both.

To sum up, the A50 does a slightly better job in the performance. Both these phones run on their own versions of skin on top of Android. The A50 comes with Samsung’s new One UI while the P30 Lite rocks the EMUI 9. And choosing one was a tough job because both of these are well optimized in their games. Huawei’s EMUI has improved a lot than what we knew for it be while Samsung’s One UI is new and fresh.

What I really like about Samsung’s UI is the dark mode that helps lessen eye strain and it brings everything down for the user’s ease. Huawei’s does not provide that but it is simple and easy to navigate, so no complaints here. There is a bit of bloatware on both but many can be deleted so nothing much to worry about here as well.

But something I have noticed is OneUI is a bit sluggish. I mean, on a flagship phone it works pretty smooth but in mid-range phones, you can feel that it is not that optimized. But in Huawei’s case, EMUI is smooth and swift even on mid-range phones. So, for the swiftness, I would choose EMUI over OneUI.

A good battery size on mid-range smartphones is a given these days. Likewise, is the case here. The Huawei P30 Lite comes with a 3,700 mAh battery while the A50 shows of a good- sized 4,000 mAh battery. Both the phones come equipped with Fast Charging Technology, 15-watt fast charging on the Galaxy A50 and 18-Watt fast charging on the Huawei P30 Lite. 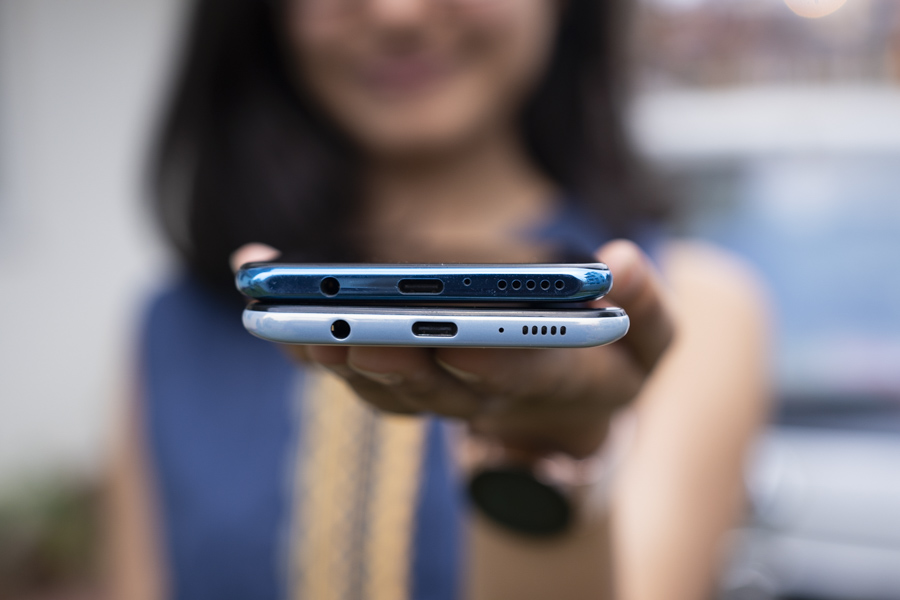 In terms of battery, the A50 gives you a slight advantage. The A50 seems to last a tad bit longer than the P30 Lite because of its AMOLED display and a slightly larger battery. The P30 Lite, on the other hand, is no slouch. It lasts for an entire day but under heavy usage, you will experience the need to charge it at the end of the day. Similarly, the A50 will leave you with 20-30% juice after using it for an entire day.

Charging on the Huawei P30 Lite takes exactly one hour and 40 minutes while the A50 takes one hour and 48 minutes. Needless to say, the charging speeds are more or less similar on both. 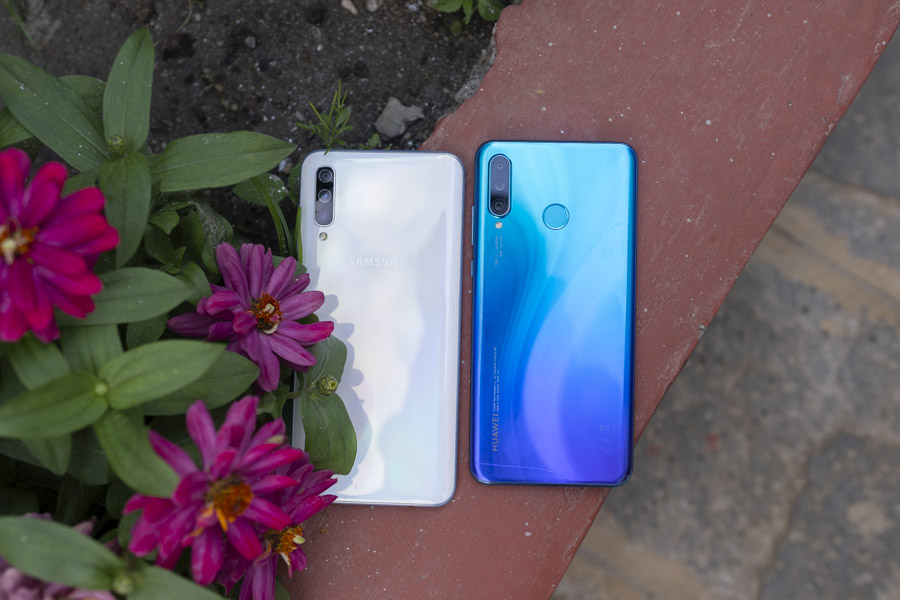 The Face Unlock shares the same story. The A50’s is a little slower compared to P30 Lite’s. Not to a frustrating level but it’s still slower.

Call quality on both is fine. Speaker test of both the phones reveals that the A50 is louder than the P30 Lite. However, the P30 Lite’s audio is more balanced and it does not get distorted at the highest volumes. So, all in all, the Huawei P30 Lite rules the extras department.

So, getting towards the conclusion, both these devices are very competitive when it comes to their offerings. But taking price into consideration, the A50 will cost you a little less and offers 4/64GB memory. While for a slightly more price, you can get 6/128 GB variant of the P30 Lite. And in the end, it all boils down to user preference. Having said that, you get the A50 for a slightly discounted price these days, so that might change your decision as well.

If your needs can be sufficed with slightly lesser memory, the A50 is a good deal, but if you want more memory and an ergonomic design, than the P30 Lite will do great for you.