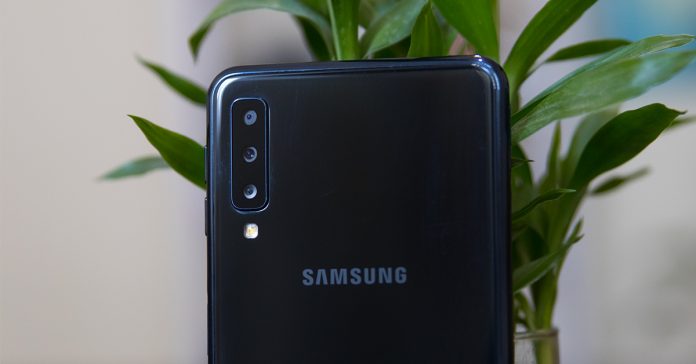 Samsung devices have the kind of design that literally scream Samsung. Slightly rounded corners on a sleek looking body, and bezels on the front. So, the A7 2018 sports a similar design. It has glass front and back that sandwiches an aluminum frame in between. The phone, although having a glass back, doesn’t quite have the heft to it, i.e. feels kind of light on the hands. I was surprised due to this, because it’s lighter than the Nokia 6.1 Plus even, which is smaller in size. And it also makes me feel like it’s plastic, but it’s so much glass like, that I think it is a glass back.

And the phone is a fingerprint magnet, and it’s slippery too. The glossy finish at the back looks premium, but due to its light weight, it doesn’t feel that way. The back houses the triple cameras on the side, which protrudes out ever so slightly. The speaker is on the bottom right, which is quite easy to muffle out while gaming or watching media. So, it’s a good thing that there’s also a secondary speaker on the ear-piece. Also, there’s no fingerprint sensor at the back. And that’s because it’s embedded in the power button, which is on the right. The volume rockers are also right above it, so, all buttons are on the right.

In addition, this time, Samsung seems to have skipped the dedicated Bixby button, which, I think is a good decision actually. Upfront, the display seems to be the best part about this phone. It has a large 6” Super AMOLED Full HD+ display with an 18.5:9 aspect ratio. There’s about 410 PPI pixel density, which makes for a sharp and crisp display. Colors are vibrant, and punchy and the pictures come out quite detailed. You can also view the contents pretty well even in bright sunlight. The touch sensitivity is also better than one found on midrange phones.

And Samsung is one of the very few smartphones to not include the notch on their displays. And due to this reason, even though the A7 2018 has a chin down below, I can live with it. But what I don’t like is that even with a bezel on top, there is no LED notification light. When you have a bezel up top, is it so hard to put a tiny notification light? Plus, the side bezels are also not as minimal as it could’ve been. 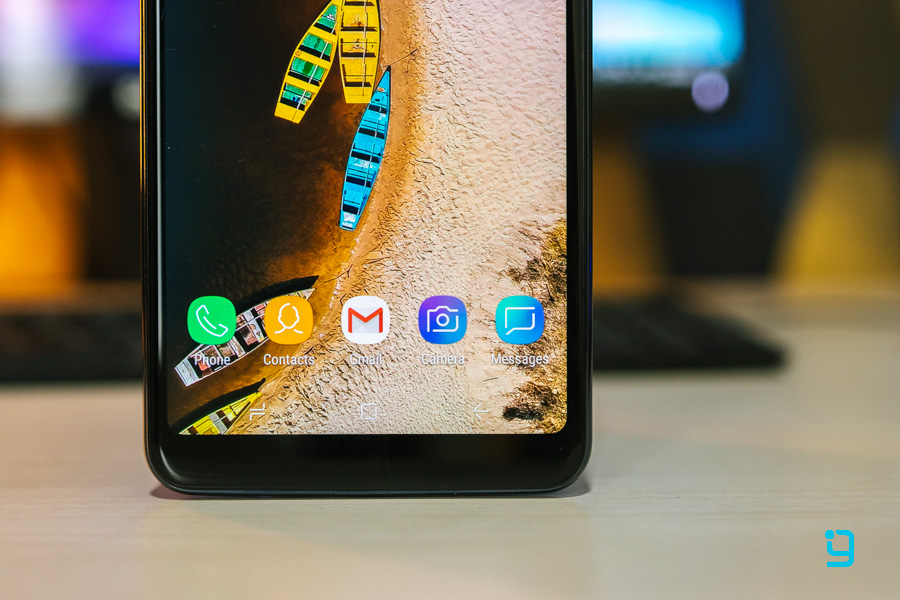 But besides that, I have no complaints. There’s also the Always On display option, that, when turned on, can make up for the absence of LED lights. But that will drain your battery, however. Other aspects of the display did impress me. And that’s why, I think that the display is the best thing about this phone. So, there are 3 cameras at the back, which is the major focus of this phone. The triple camera setup consists of a 24 MP primary lens with f/1.7 aperture, a 5 MP depth sensor and an 8 MP ultra-wide sensor with f/2.4 aperture. With these three cameras, I expected quite a lot from this phone. But, I think, I had too high of expectations from this one. I was thoroughly impressed by the triple cameras on the Huawei P20 Pro and expected similar results, but it doesn’t nearly meet those standards. Of course, it is unfair of me to compare this mid-range with an expensive flagship, but Samsung is also known for great cameras.

Image quality from the main camera is good, and really good in some good lighting conditions. There’s good contrast and colors seem accurate enough. Details are well preserved and there’s vibrancy in the images. However, the pictures didn’t impress me as much as I thought it would. In low light, it’s even worse. There’s noticeable loss in details, quite the amount of noise and images are jittery. But images in well-lit indoor conditions are good enough.

Samsung’s Scene Optimizer that makes colors pop in some scenarios makes its appearance here as well, but it doesn’t seem as good as on the Galaxy Note 9. The Portrait mode, which Samsung calls Live Focus, is again, typically Samsung. Edge detection on human subjects can produce good results most times. Whereas, on other objects, it’s a hit or a miss condition. When they do work, they can produce excellent results, but this is an aspect Samsung really needs to work on.

Regular vs Wide Angle
1 of 4

The Ultra Wide lens is the extra sensor on this phone. The new addition is definitely welcome, but the pictures from this camera, are again, not that great. Its 120-degree field of view helps you capture sceneries easily. An 8 MP resolution means you won’t be able to zoom in really well, but if you’re taking a wide angle shot, you won’t need to zoom, would you? Also, the f/2.4 aperture makes it more or less, unusable in low light, which is a downer. But hey, ultra wide images of natural landscapes do look great. Again, since ultra wide images are processed differently, there will be some color shifts in the pictures, but it won’t be anything to fret over about.

The selfie camera does a really good job. As usual, it is the same story, well lit conditions equals impressive shots, but low light images…not so much. Your facial details are well represented but the absence of backlit HDR causes blown out lights in sunny environments. Portrait selfies are purely software here, but to my surprise, it did a better job than the back camera. There’s also a Wide Selfie option that enables you to include more people in your selfies, which is a good touch.

As for videos, this phone is not able to take 4K videos, but only 1080p videos @30fps. Videos have EIS, but the Auto Focus is quite slow. It can be annoying, but having said that, the videos are better than some of the phones at this price range. There’s also Slo-Mo, and Samsung’s Slow-Mo are always good enough.

The triple cameras on the Samsung A7 2018 are not very impressive, but it certainly is interesting. After all, it’s not always that you get three cameras on a mid-range device.

We mostly criticize Samsung for their poor choice of processors on their mid-range smartphones. The J6, J8, and A6+ we recently reviewed all had an average chipset, but that’s not the case with the A7 2018. It is powered by Exynos 7885 chipset which offers powerful Cortex A73 cores. Combined with its 4 GB RAM, the phone performs accordingly. Transitions are quite smooth, and multi-tasking is breezy. Regular web browsing and app usage work pretty well.

Light gaming works pretty well too. As for PUBG, you can play it good enough in Medium settings, but there will be slight stutters. But, the jitters stayed even in Low settings while I was playing it. Other games like Dead Trigger 2 work good enough. Thermals are pretty good, as even with a couple sessions of PUBG, the phone didn’t go over 38-degrees.

Samsung’s UI also comes with quite the bloatware, and the very first one that comes to mind is Bixby. Yes, there’s no Bixby button, but if you swipe left on the home screen it’ll sneak up on you. There are some nifty additions like swiping down anywhere on the home screen to drag down the notification shade. And for someone with small hands, it’s a good quirk to have.

The fingerprint sensor on the side works well enough, but having one on the side has its own set of inconveniences. For example, if you are left-handed, then, you’ll probably have to think about which finger to unlock it with. Plus, a sensor on the side means the position of your finger has to be just right to unlock it. There’s also Face Recognition, but as it is with Samsung devices, it’s not the fastest we’ll see.

Overall, the performance on this phone is just good, no more than that. If you’re into high end gaming, maybe you should pick something else, but it does a commendable job on other fronts.

As for storage, it comes in options of 128 GB with 6 GB RAM and 64 GB with 4 GB RAM options, but in Nepal, we only have the 4 GB variant available in Nepal. 64 GB option is quite enough, and there’s also a dedicated microSD card slot to expand your memory up to 512 GB.

As for battery, the A7 2018 has a 3300 mAh battery. Now, that is like the standard battery capacity in 2018. And it is also enough to last you through the day in regular usage. Heavy users, however, will need to carry around a charger with them. Also, if you’re a heavy user, you would be better off turning off the Always on Display, but with the absence of those notification lights, you’ll be in a dilemma.

It’s sad to see Samsung still employing a microUSB port. And the absence of Fast Charging adds more to its woe. The phone will take well over two and half hours to fully charge.

I feel like the Samsung Galaxy A7 2018 is an ambitious mid-ranger. The three cameras at the back is the major focus of this device, but the areas it has cut corners are clearly visible. Despite having 3 cameras, the image quality is nothing extra ordinary and it fails to keep par with Samsung’s flagship cameras even.. Also, it cuts corners in design with the thick bezels. Plus, the absence of LED lights despite having a bezel up top bothers me. Also, the older Android version and Samsung’s own UI is something to think about. Furthermore, lack of fast charging is also something you need to live with.

But Having said that, the price of the phone is around $400 internationally or Rs.43000 in Nepal. When it comes to international and local pricing, Samsung does a commendable job. For this price, you are getting a AMOLED display, a good enough design, good enough set of cameras, and a full day battery life. Also, on the performance front, Samsung has added some improvements compared to its other predecessors.

If you’re looking for better cameras, there are options like Oppo F9, and Huawei Nova 3i is still the winner in terms of design. But this phone provides some unique quirks, and that additional camera is interesting. It’s not really a killer by any means, but is certainly a good buy…especially with the brand value that Samsung provides.