There was a time when smartphones were simpler. There were flagships, mid-ranges, and budget phones. Now, there are smartphones in almost every price category. What’s more overwhelming is the number of choices we get in these price segments. And with flagships getting more expensive, there are premium mid-rangers in the market…also kind of crowded. Here, we compare three premium mid-rangers: Samsung Galaxy A70 vs Vivo V15 Pro vs Oppo F11 Pro. So, which one is the best? Let’s find out.

Let’s start with how they look. All three devices appear to have glass backs, and for the price, it is expected as well. But none of them do. They all have plastic construction. And although Samsung calls their construction “Glastic”, it feels the same. Maybe an extra point on the slightly new construction, but again, the A70 feels a bit cheaper in the hands, compared to these two. Oppo F11 Pro and Vivo V15 Pro have, more or less, the same construction. And they don’t have a notch up front, going for the Pop-up cameras instead, which is a new and somewhat cool technology. So, they win.

But between these two, I like the color better on the Oppo F11 Pro. And if you choose the Marvel edition, well, it’s no contest! So, Oppo F11 Pro wins the design and build. Here, Oppo loses the hand right away because it’s the only one with an IPS LCD panel while the other two sport Super AMOLED. Now, of course, that doesn’t mean the F11 Pro’s display is bad…it’s just not as good as the other two. Between the other two, the A70 gets a taller 6.7-inch display, which makes for a better multimedia experience. It comes with a tiny U-notch, but that is forgivable. And while the V15 Pro comes with a true full-screen display, the colors on the A70 are simply better. Plus, Samsung is always on top when it comes to displays, so, it wins this round.

As for the performance, all these phones pack 6 GB RAM and 128 GB storage. The V15 Pro and the A70 run on Snapdragon 675, whereas the F11 Pro runs on the slightly inferior Helio P70.

And between these, the Snapdragon 675 stands as the clear winner. If you need proof, the benchmark scores are there for you to see. And in these three, too, the V15 Pro leads by a very little amount.

But benchmarks are not the full story. To compare the performance, we also did a speed test of these phones. Here, the F11 Pro takes the longest to load the apps. While the loading time is, more or less, similar to the other two.

We finished loading a set of apps, and reopened them, again, in reverse order, as these speed tests go. And we found that the RAM management was better on the V15 Pro. It didn’t reload any of the apps, including heavy games like PUBG either. The A70, on the other hand, reloaded some heavy apps like PUBG and Subway Surfers. However, it was the worst on the F11 Pro, as it reloaded many of the apps – even ones like Fruit Ninja and such! 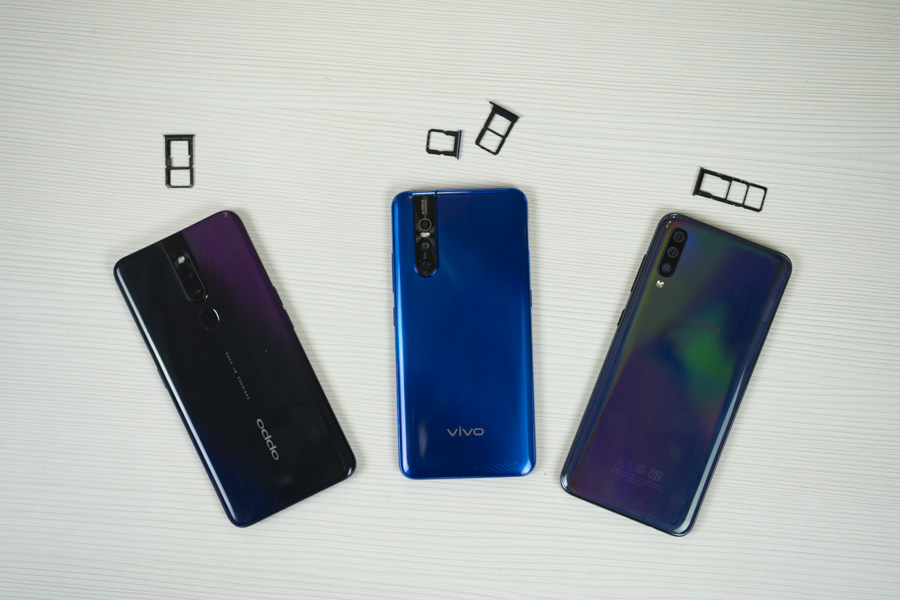 However, in the Read / Write speeds, the A70 is the better one, here. But considering the other benchmarks, and RAM management, this round goes to the V15 Pro.

In terms of software, however, the clear winner is the Galaxy A70. It comes with the new One UI, and it’s a lot better than the UI of the other two. It gives you a cleaner user experience, better navigation, and lesser bloatware.

Oppo’s ColorOS and Vivo’s FunTouch OS are both pretty heavy and don’t provide as good of user experience. While Oppo fixed its UI to allow swiping to cross-out notifications, Vivo’s is still a clone to the iOS…and a half-baked iOS at that! So, you can see why One UI, even with its slightly cartoonish UI, is the best among these.

Now to the security. In this department, the A70 and the V15 Pro come with in-display fingerprint scanners while the F11 Pro features a physical rear-mounted sensor. And as it is with physical sensors, the F11 Pro’s is blazing fast and highly accurate. It unlocks your phone instantly.

But the V15 Pro isn’t bad either. Its in-display fingerprint sensor can unlock the phone fast. That is a tad bit slower than the F11 Pro, but still pretty fast.

And then, there’s the A70. This one didn’t seem to really think about including a faster sensor here, at all. It takes around a second to unlock the device, and that is really frustrating. Even its Face Unlock is slower compared to the other two devices. So, the A70 is out.

Among the other two, however, it’s the F11 Pro that’s the fastest in unlocking. But since the V15 Pro is not behind, and employs a newer, more advanced tech in it, the point goes to the V15 Pro.

Let’s compare juices now. The V15 Pro packs a good sized 3700 mAh battery while the F11 Pro has a large 4000 mAh unit. But, both offer similar backup and similar charging speeds. But the one on its own league is the A70. It has got a huge 4500 mAh battery, and that too, with a 25-Watt Adaptive Fast charging. The battery lasts almost 2 days on single charge and charges from 0 to full in around 1 and half hours. So, it’s the clear winner in this aspect. 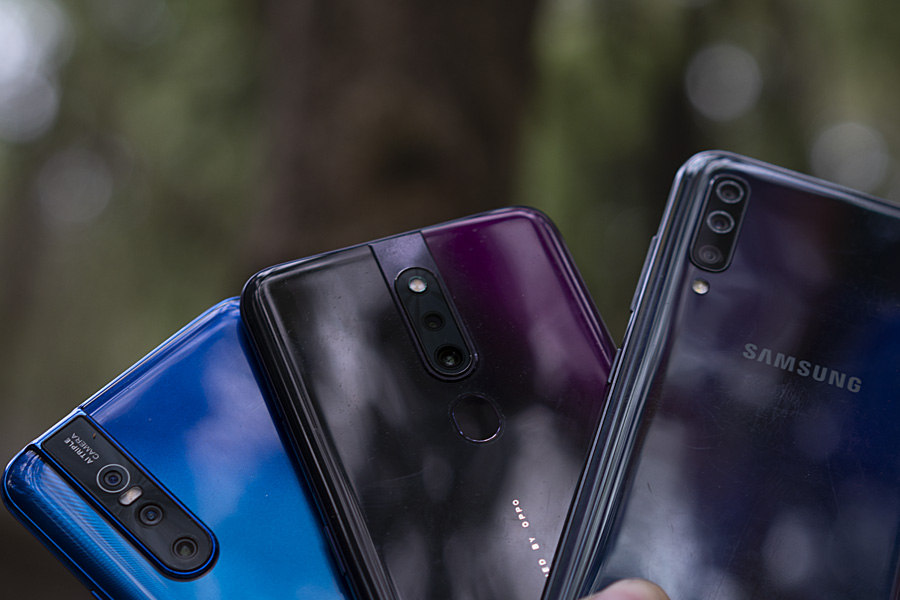 Lastly, the cameras. And these, have been, by far the most difficult aspect to compare in these phones. But we’ve tried our best, and here are the results.

Take a look at a few of these images, here. Now, if we surf through some samples, you can see that the images from the F11 Pro and the V15 Pro are slightly oversaturated, while the A70 gives you washed out colors.

The over-saturation is more pronounced on the V15 Pro. It may be the result of over-processing or something, but sometimes, it gives you pictures so highly oversaturated, that you kinda don’t wanna look at them!

But, in some scenarios, the popped-colors look a lot better. Of course, it can result in unnatural looking images, but sometimes, it looks very pleasing to the eye. Also, the V15 Pro nails the details, sometimes, outdoing the other two phones, as well.

If we compare the F11 Pro side by side, the details are on par with the V15 Pro, but the images are mostly flawed by this greenish-tint to them. Maybe that’s why photos with green sceneries appear to be livelier on this one. ­­

The A70, as I already said, produces washed out colors – sometimes, to the point that it loses the colors. If you look at this tree here, the purple flowers don’t even appear purple! But it is also capable of maintaining a more uniform color distribution, though.

As for portraits, A70 has better blurs on the bokeh effect, but again, suffers from faded colors. V15 Pro over processes them and brings saturated colors. But the F11 Pro, overall, has better colors, details and edge detection in this scenario.

In low light mode, however, it’s the V15 Pro that takes the cake.

In terms of selfies, the F11 Pro and V15 Pro outshine the A70. The skin textures and colors look almost lost in the A70 while the other two preserve them quite well. Here, too, the V15 Pro tends to over-saturate images, which, I admit, can look pleasing to the eye sometimes. But it makes up for that in terms of details, in which, it outperforms the other two.

So…yeah…there’s no exact conclusion in the camera department. And as I said, it has been really tricky to test out the cameras. And the results don’t point to a clear winner. It’s a mixed bag of emotions.

All of them try to do what they do best – V15 tries to give you vibrant colors, the A70 goes for a uniform color distribution while the F11 Pro can give you better photos of human subjects. So, there’s that.

And not only in the camera department, but there also doesn’t seem to be a clear winner in all the other aspects, rounded up. F11 Pro has a better look and feel, which matters to a lot of people. The A70 has the best display, and battery. V15 Pro gives you the best performance and better security.

Each of them has their own sets of pros and cons. So, it’s not easy to choose a clear winner, here. You can, however, look at all the aspects, decide which one matters to you the most, and pick your phone.

This has been the battle of the premium mid-rangers: Samsung Galaxy A70 vs Vivo V15 Pro vs Oppo F11 Pro. So, which one would you prefer? Let us know in the comments.