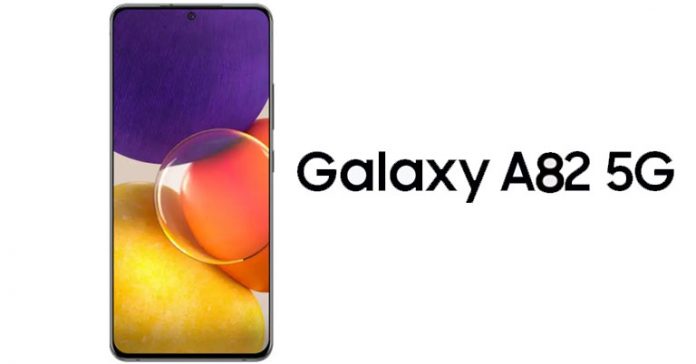 Courtesy of Indian tipster Mukul Sharma, the design and the key specs of the upcoming Samsung Galaxy A82 has leaked online. It will be the most premium offering in the Galaxy A-series ahead of the recently launched A52 and A72. In this post, we will be rounding up all the rumors and leaks surrounding the specs, features, and launch of the Samsung Galaxy A82.

Popular Indian tipster Mukul Sharma has spotted the upcoming Samsung A Quantum 2 in Google Play Console listing. After all, the first Quantum device was an A-series phone with advanced encryption for added security. This phone is supposedly based on the yet-to-be-announced Galaxy A82 smartphone. Thus, this listing should give us an idea of what A82 will bring to the table.

The listing has provided us the first look at the front of the device. The phone in the listing features a flat FHD+ panel with a center-aligned punch-hole cutout. However, Samsung can decide to go with an A80-like flip-camera module on the A82. At least, that is what all the rumors suggest.

The side-bezels and chin look slim. The volume rocker and the power button are on the side of the device. Like other recent premium A-series devices, this one too will feature an under-display fingerprint scanner.

On the performance side, the phone is listed with Qualcomm SM8150P. It is believed to be the Snapdragon 855+. But it could also turn out to be the Snapdragon 860 that recently debuted with the Poco X3 Pro. However, the two chipsets are almost similar. The phone will ship with Android 11 with OneUI on top.

We also expect the phone to feature at least four sensors at the back. According to the rumors, it will have Sony IMX686 sensor as the primary camera. It will be accompanied by an ultrawide, a telephoto, and a macro sensor.

Given the specs of the recently launched A52 and A72, we are confident that the phone will come with a higher refresh rate screen, Optical Image Stabilization, and an IP67 rating.

Samsung is yet to confirm the existence of Galaxy A82. However, given the recent listing of the device, it could announce the device pretty soon.