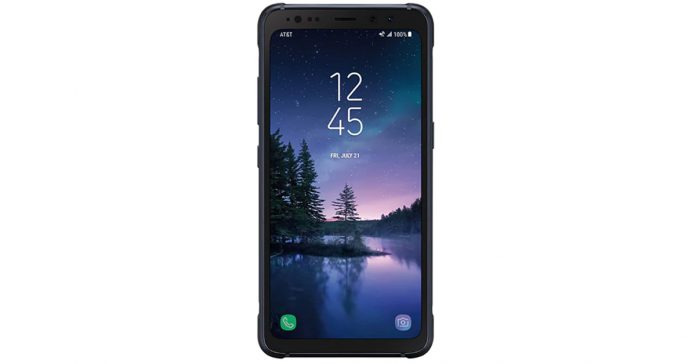 Remember the beefy looking, muscular tough hunk of a phone that was the Samsung Galaxy S8 Active? Well, many of you might not. Because, for starters, that was a product limited to the US only, through the AT&T carrier. And Samsung’s active lineup of phones has been around for quite a while now. It started with the Galaxy S4 Active and the last Active phone we saw was the S8 Active. Then, rumors have it that the S9 Active got canceled. But now, another set of rumors say the Samsung Galaxy Active lineup is coming alive again.

But this time, instead of having a rugged version of the current flagships, like the Samsung Galaxy S10, the Samsung Galaxy Active will be a different lineup altogether. And even the leaked image renders show the same thing – there are bezels all around, and three physical tactile buttons under the display. That makes sense for a phone that is supposed to be rugged. You can’t have curved glass and what not for phones built for endurance, can you?

Also, the images bear resemblance to a rugged smartphone that was spotted at the MWC 2019 February. So, the rumors are only gaining solidified, here. In addition, leaked specifications show the phone heading towards a mid-range segment. There’s a small 5.2″ screen at QHD resolution, a single 12.2 MP rear camera and an 8 MP front camera. In addition, there’s a rear-mounted fingerprint sensor, a large 4500 mAh battery, and the Exynos 9610 processor.

Furthermore, the camera sensor is the same as one on the Galaxy S9. And while that may make you think the camera quality is the same, the mid-range processor makes for not so good image processing.

Anyways, the rumors even go on to state the launch date on August 9, but there is no official word on that yet. So, we still, cannot be sure about this. However, if it does come back, AT&T carrier will carry it once again. And the phone should attract those who abuse their phones a lot, like adventurers, firemen, etc. But you will be able to buy one for the normal layman, too.