Samsung Nepal launched the budget-oriented Galaxy M02s earlier this year. And now, the company has launched the regular M02. The device is now available for purchase in Nepal from the majority of mobile shops all over Nepal. In this post, we will take a look at the specs, features, and prices of the Samsung Galaxy M02 in Nepal.

Here, the Galaxy M02s were very similar to the A02s that were announced last year. Similarly, the M02 shares most of its features with the recently launched A02. 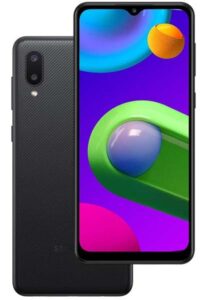 The phone sports a 6.5-inch HD+ display. It has an Infinity-V notch that houses the front-facing camera. The bezels around the screen are quite thick, especially at the chin. At the back, Galaxy M02 has a pill-shaped camera module instead of the rectangular one in the M02s. An LED flash resides just below it. The panel has textured stripes for a tight grip. The phone is 9.1mm thick and weighs around 206grams. There are four color options to choose from– Black, Grey, Blue, and Red.

Powering the Galaxy M02 is MediaTek MT6739W, which is a quad-core CPU with subpar performance. It is definitely a downgrade from the Snapdragon 450 chipset from the M02s. The phone is available in two RAM variants – 2 and 3GB of RAM. Both variants come with 32GB of internal storage, which can be expanded using an external microSD card. The phone ships with Android 10 with Samsung One UI Core on top. 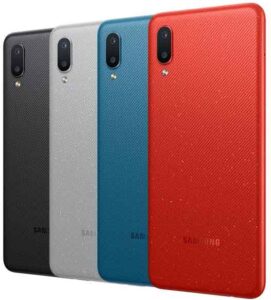 Talking about the camera, there are two at the back and one on the front. The rear setup on the back consists of a 13MP primary camera accompanied by a 2MP macro lens. It lacks the 2MP depth sensor that is there on the M02s. On the front, there is a 5MP camera for the selfies.

M02 is fueled by a massive 5,000mAh battery and it can be charged using a micro USB port. There is no mention of fast charging support.